Did you know that Joe Fortes Seafood and Chop restaurant was named in honour of Joe Fortes, Vancouver's first official lifeguard? 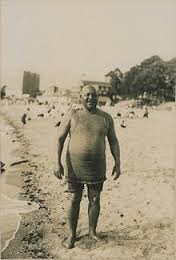 Joe Fortes was originally from Barbados and lived in England before arriving in Vancouver in the late 19th century. Joe Fortes worked many jobs in the city including hotel porter and bartender. His true passion was teaching children to swim in the ocean at English Bay where he made his home and patrolling the beach where he served as the city's unofficial volunteer lifeguard. Joe Fortes is credited with saving over 29 people from drowning and in 1900, Vancouver appointed him the city's first official lifeguard.

Joe Fortes was loved by Vancouver's children who taught them how to swim and a hero to the many people whose lives he saved. Joe Fortes died in 1922 and his funeral procession was one of the largest in Vancouver's history attended by both ordinary citizens and the city's elite.

In 1926, a memorial fountain designed by sculptor Charles Marega was built in his honour at Vancouver's West End's Alexandra Park and bears the inscription: Little Children Loved Him. In 1976, the Vancouver Public Library opened the Joe Fortes Branch in the West End and in 1985 the Joe Fortes and Chop House restaurant opened and was named in his honour.  In 1986, Vancouver's centennial year,  the Vancouver Historical Society named Joe Fortes, "Citizen of the Century" and in 2013, Canada Post released a postage stamp of Joe Fortes on February 1st celebrating Black History Month.  Joe Fortes was truly a Vancouver legend.