Barb Snelgrove honours the nation’s cocktail — and her dad — as part of a new book commemorating the Caesar, just in time for Canada Day
Sandra Thomas
Jun 29, 2019 8:18 PM

Barb Snelgrove honours the nation’s cocktail — and her dad — as part of a new book commemorating the Caesar, just in time for Canada Day...

Barb Snelgrove's Caesar recipe was chosen for a book dedicated to the nation's cocktail, just in time for Canada Day. Photo Dan Toulgoet

Barb Snelgrove has long been famous (infamous?) locally for her Caesars.

One only has to look as far as Snelgrove’s Facebook page to see photos of her inventive creations, which are topped with everything from salami to prawns and cheese to beans, depending on her mood — or the season.

And now Snelgrove’s Caesars have been recognized nationally in a new book titled The Caesar. 50 Years. 50 Stories: Celebrating a Half-Century of Canada's National Cocktail.

Snelgrove is in good company — also included in the book are Canadian actors Dan Aykroyd and Jason Priestley, comedian Colin Mochrie, former NHLer Doug Gilmour and chef Lynn Johnston. As well, the “All Hail Barb’s Caesar” is a featured cocktail at Mary’s on Davie, with partial proceeds dedicated to charity.

The beloved Caesar, which differentiates itself from its American cousin the Bloody Mary by the use of clam juice as an ingredient, was invented 50 years ago in Calgary by hotel restaurant manager Walter Chell. The rest, as they say, is history.

The Courier had a few questions for Snelgrove about her love of Caesars.

When did you make your first Caesar?

I do believe it was late teens, early 20s, making them for my Dad. I had grown up watching him make them and one day he passed the baton. He liked it so much it became a regular thing.

When did you realize your Caesar recipe was so good?

The first time would be when I received the seal of approval from my Dad, who was the king of Caesars. The second time would be when I was on vacation in San Francisco and Clamato juice had just been imported. I made a round for all the people in the apartment building I was staying at.

The next morning I woke up to the sound of the neighbours yelling out their windows, asking when I was getting up and making another round of “that Canadian drink” for everyone. I was pretty much the “Caesar Slave” for the rest of the weekend!

How did you get involved in the book?

A friend saw a contest asking Canadians to share their favourite Caesar story for potential inclusion in a Motts Clamato book that was being created to celebrate the 50th anniversary of the invention of the Caesar. And, as I am well known for my love of all things Caesar and my Caesar-making skills, she told me, “You have to enter, this is you!” 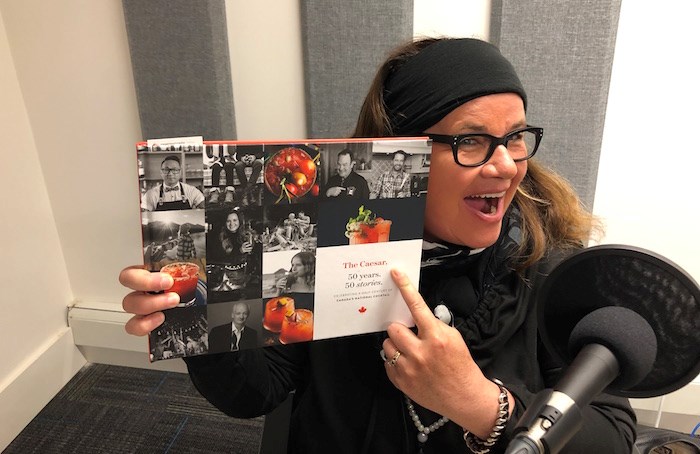 Barb Snelgrove in the V.I.A. studio. Photo by Lindsay William-Ross

The deadline to enter was an hour away, so I stopped everything and wrote them the story of how my Caesar skills came about learning from my Dad and how much fun I have creating them for people both at home and abroad, becoming an unofficial roving Caesar Ambassador. And out of 2,500 entries, my story was chosen. It is an honour I think my Dad would have loved and got a real kick out of.

You make your Caesars for all kinds of special occasions, can you give some examples?

Most recently I was honoured to spend an afternoon making them for guests at a celebration of life for someone who had passed who had loved drinking Caesars. But pretty much any time Caesars are featured it’s a special occasion. I truly believe that Caesars are the definitive happy hour drink and that’s the time to load up the condiment element so it’s a meal in a glass.

I think the name of the last day of the week should be changed to #CaesarSunday. The Caesar is perfect at any time of year and depending on the celebration, change up the garnishes to fit the mood. 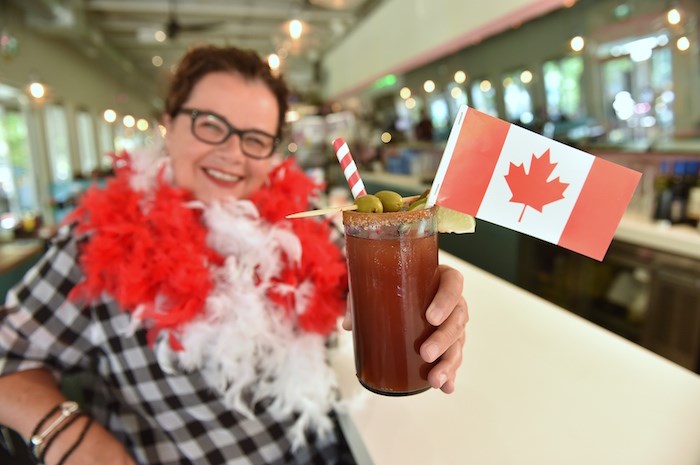 How did your Caesar end up as a drink special at Mary’s?

Mary’s on Davie decided to add a charitable promotion to their drink menu by highlighting “community icons” with a drink named after them. When they approached me to be one of their featured drinks, the obvious choice was a Caesar. The “All Hail Barb’s Caesar” is the featured drink for June (and will slurp its way into July). Partial proceeds are going to two wonderful organizations in Vancouver, A Loving Spoonful and Friends for Life. Both of these organizations do amazing work in the community, kudos to Mary’s on Davie for paying it forward.

For Canada Day, I would go with baby bocconcini, a chunk of Canadian back bacon and cherry tomato garnish. For summertime Caesars, make sure to throw some salami or pepperoni sticks in there. Prawns, cheese, pepperoncinis, beans, the sky is the limit with the condiments, have fun with it. Or if you really want to impress your guests, infuse your vodka with bacon (it’s easier to do than you think) because who doesn’t love bacon? Half the fun of drinking a Caesar is taking a bite of the condiment, then taking a sip. The flavours complement each other so well.

Partial proceeds of the “All Hail Barb’s Caesar” at Mary's on Davie go to A Loving Spoonful and Friends for Life. Photo Dan Toulgoet

Do you have any final words on Canada’s favourite cocktail?

It’s a drink and a meal and everyone has their own take on it. How many cocktails can you think of that stir up so many memories to so many different people? It perfectly represents Canada, where we are made up of many different cultures and the Caesar is adaptable to all of them. Whatever your background, make your Caesar with Clamato juice and add your fave flavours. I have enjoyed them with sake, vodka, tequila and even Guinness beer. And don’t forget to garnish with your favourite regional cuisine. Caesars (to me) are all about gathering together and celebrating good company and laughs. What more could you ask for in a drink?