Farm. Fresh. Beer. Those three words say it all.

The moment you walk into the tasting room at Barnside Brewing Co. in Ladner, you instantly feel at home. It’s authentic. It’s Delta.

The newest craft brewery in the Lower Mainland, located at in the Crescent Slough area of Delta’s agricultural community, opened the weekend of Jan. 17 to much fanfare. The tasting room was packed – lined up out the door, in fact – as the public clamored for a taste.

Barnside is a collaboration of members of four Delta farming families: Ken Malenstyn, Sean Buhr, Brent and Shelley Harris and David Terpsma, who is the brew master.

“I was considering putting in hops, Brent mentioned he was growing some malting barley and Sean and Dave did some home brewing using that malting barley and it was pretty good beer,” he said. “So we said, ‘Wow, we might be onto something here.’”

A year’s worth of discussions and planning created a vision for a craft brewery, but that was only the beginning.

“It took a long time. Approvals, building on farmland is not the easiest way to go about it. If we would have leased a space in an industrial park, we would have been open two years ago, but it would not have been what it is,” said Malenstyn.

“Our whole thing from the start was, we are not just an on-farm brewery. We are farmers first. We grow the beer, brew the beer and sell the beer right on the farm, so that was a big part of the story for us.

“It’s a crowded craft market out there. Everyone is trying to differentiate themselves. For us it was pretty easy: we’re four long-standing farm families in Delta and we all live right in the neighbourhood.”

The name Barnside came together after a number of ideas were tossed around, he admitted.

“When you have a group of people everything is difficult,” Malenstyn said with a smile. “Plus we wanted to have something that we could trademark, a name that was clear in both Canada and the U.S. There was a lot of great ideas we couldn’t use. It took us about a year.”
He said everything they’ve done to this point has been authentic from the homegrown products they use to the materials to construct the brewery.

“We want to ensure that it is all authentic to the farming community, to pay homage to where we are from.”

The tasting room was repurposed by Reg Vidmar using materials from a pair of barns in the community – one on Hornby Drive built in 1910 and the other on River Road built in 1890.

“Every piece of wood in here is from those two barns. I think that’s cool. It pays homage to the history of farming in Delta,” said Malenstyn.

He said the first couple of weeks have been a whirlwind.

“You just don’t know. You think you have a good product and you’re proud of the beer and the space. I was confident in that and that people would want to check us out, so to see the reactions and the response has been really gratifying,” he said. “Four Winds and Fuggles & Warlock Craftworks have all been super supportive. We’re local and we’re neighbours, but that’s what the craft brewing industry is all about. It’s a collaborative industry, very open and very sharing.” 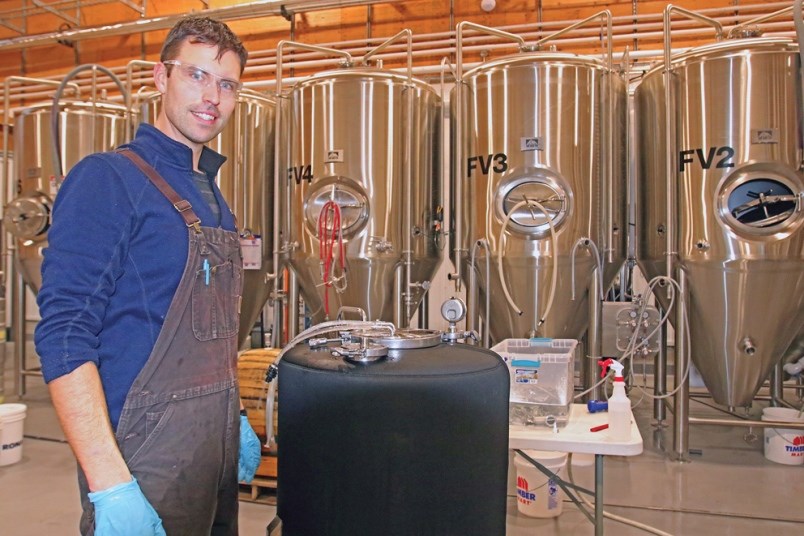 He said it is also about creating a sense of community.

“For me, that is why I wanted to do this. I wanted that place where people can sit down, hang out, socialize, and not look at a TV or on their phones. We probably interact and socialize more in a tasting room than anywhere else. It’s the environment, the beer, which is a cool thing, and I think we can use more of this in Delta.”

Initially plans are to self-distribute with an emphasis on growing the brand locally before a wider distribution.

“We want to take care of our local community first because they will be the ones who will always support us,” Malenstyn said. “Once we do that we will branch out a bit. We want to control the quality and control the distribution. It will take a few months to establish what the daily business is and then grow from there.”

“For me, and for what I had in mind, I think we have exceeded the expectations,” Malenstyn said. “You have an idea and you map it out, but until you see it you don’t know whether you hit it or not. In terms of the physical brewery and the brand, really happy with everything. We all come at it from different angles, different passions, but it works. That first weekend was awesome. We were packed. People really enjoyed the beer, enjoyed the concept. We just need to continue to be authentic and do it the way we feel is right.”