What’s old is new: B.C. brewers look to the past for inspiration

Before there was stainless steel, or even a rudimentary understanding of microbiology, beer was brewed in a much more rustic way, often open to elements using methods that would seem crude today.
0
Sep 18, 2018 12:08 PM By: Rob Mangelsdorf

Standing out in the increasingly crowded craft beer market often means craft breweries need to produce beers that are unique. Set a trend, develop a style, and there’s a good chance you’ll get the attention of us thirsty beer dorks.

There’s ample evidence of this in the past few years—just look at all the new styles that have popped up, from dry-hopped kettle sours to milkshake IPAs. Hell, people are even putting glitter in their beer for some bizarre reason. Glitter. In their beer.

However, many B.C. brewers are looking to the past for inspiration, and are creating some pretty interesting and unique beers as result. In addition to embracing extinct or oft overlooked styles like gose or gruit, some brewers are looking at historical brewing methods as well. 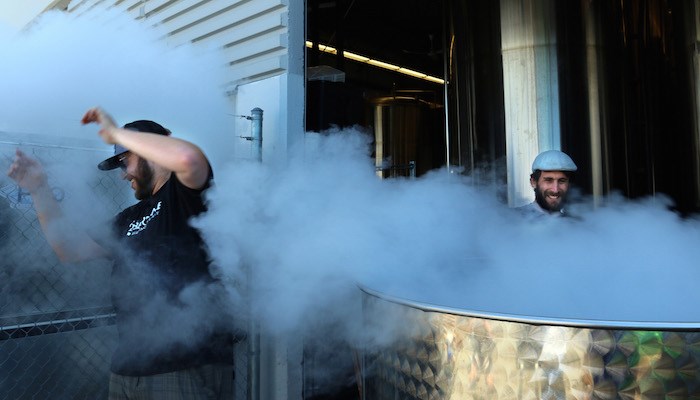 New Westminster’ss Steel & Oak Brewing made their Steinbier Lager by plunging superheated rocks into the unfermented beer in order to boil it—a method that was commonplace hundreds of years ago. (Photo courtesy Steel & Oak)

Before there was stainless steel, or even a rudimentary understanding of microbiology, beer was brewed in a much more rustic way, often open to elements using methods that would seem crude today.

Take “steinbier,” for example. German for “stone beer,” making a steinbier requires you to boil your unfermented beer (known as wort) by pouring it over large rocks that have been heated to 400 C. This results in a lot of fizzing, splashing, steam and—most importantly—the caramelization of the sugars in the wort.

Steel & Oak Brewing in New Westminster teamed up with German brewery Freigeist Bierkultur two years ago to give this archaic brewing method a shot, and the result was Steinbier Lager.

“Steinbier isn’t so much a style as a brewing method,” says Steel & Oak head brewer Eric Moutal. “We love lagers, so we decided to do a very crisp and clean lager to showcase that caramelization, and threw some rye in there for balance.

“We’re really happy with it.”

But historical brewing methods aren’t being revived just due to some penchant for anachronism, though. Sometimes the old ways produce unique flavours that can’t be replicated any other way.

“We’re not doing it for the sake of doing it,” says Moutal. “That doesn’t make sense. We want to create a beer with a specific, unique flavour. It’s all about that caramelization, and the minerality the rocks add to the beer. It’s a very complex flavour profile.

“Also, playing with fire and rocks is really cool.”

This means of boiling wort developed because most breweries used to brew their beer in huge wooden vats that couldn’t be heated directly, in the days before stainless steel and electricity. But as it turns out, one B.C. brewer is resurrecting the use of wooden brew kettles, too. 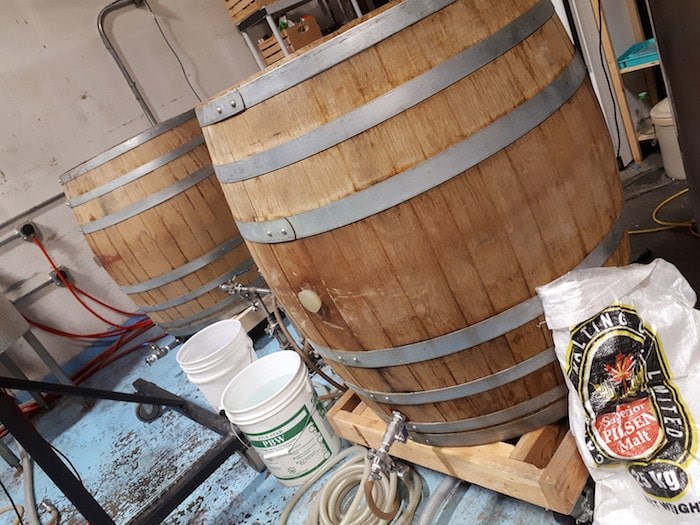 Oliver Gläser is the owner and head brewer of Boundary Brewing in Kelowna, which specializes in traditional German-style beers. Last year, when he needed to upgrade his brewhouse, he decided to replace his stainless steel system with one fashioned out of massive oak vats, originally used for wine.

“I’m sure it’s the only [wooden brewhouse] in Canada,” says Gläser. “Dogfish Head [in Delaware] has one that they only use for special beers, and there are a couple breweries in Europe that have them, but that’s about it as far as I know.”

Gläser says he’s been always been fascinated by wooden brewhouses, and when he came into possession of two 600L oak puncheons he decided to make his own.

He, too, had to make things up as he went. Since the brew kettle is wooden, Gläser had to install electric coil immersion heaters into the base of the vat. If the system sits unused for more than a few days, the wood will dry out and the staves will separate, requiring the kettle to be steamed to rehydrate and seal the staves. And since there are some flavours that get transferred from one brew to the next, Gläser has to manage what he brews, and when.

“It’s seasoned, like a cast iron pan,” he says. “But I wouldn’t be able to do a Baltic porter then a pilsner the next day.”

But despite its idiosyncrasies, Gläser couldn’t be happier with his wooden brewhouse. He says the wood helps impart richness and a subtle oakiness to his beers, giving them a more complex flavour profile.

“It sets us apart,” says Gläser. “We get people coming in here just to look at the brew kettle. My only complaint is that I wish it was bigger.”

However, just because something is cheaper, doesn’t necessarily make it better—and what is “better” is often different depending on who you ask.

When breweries started kegging beers in the UK, the Campaign for Real Ale (CAMRA) was founded to ensure real cask ales weren’t completely wiped out in the country’s pubs.

While hand-pulled cask ales might be a massive pain in the ass to properly manage compared to kegged beer, as they require constant care and attention and have a drastically shorter shelf life—they’re also unique and delicious. And, thankfully, they’re still around today.

Back in the days before refrigeration, after the wort was boiled, it was cooled in large shallow pans called coolships, exposing it to a large surface area to get it down to fermentation temperatures quickly. Now, that’s a bad thing if you are trying to prevent your beer from being infected, but it’s a really good thing if you’re trying to infect it on purpose. 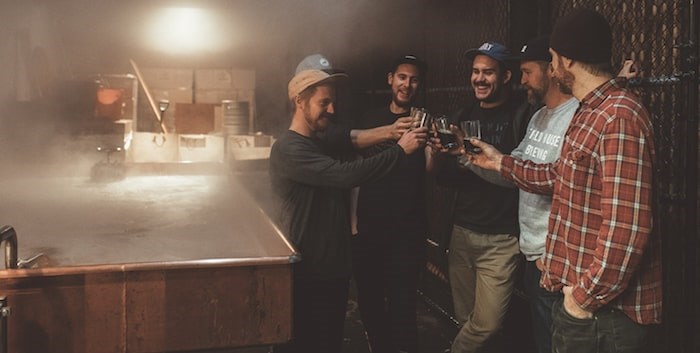 Abbotsford’s Field House Brewing has been experimenting with coolships since 2016, the latest being a collaboration with Bellingham’s Wander Brewing this past May. The barrel-aged farmhouse ale was made with local malt and aged hops, and was spontaneously fermented in the coolship, similar to how beer would have been brewed in Belgium hundreds of years ago.

“What coolships allow you to do is to cool hot wort over a period of about 12 to 24 hours,” says brewer Matt Friesen, “allowing the local wild yeast and bacteria present in the air to take hold and contribute their own unique flavours as local wild yeasts and bacteria struggle to dominate the fermentation.”

The point is to create a beer that’s unique and delicious, with a flavour that can’t be found anywhere else.

“One of our main brewing focuses has always been farmhouse-style beers and [using these methods] allows us to get closer to the roots of this tradition,” says Friesen. “Our hope is this beer captures some of the local Fraser Valley terroir.”

The Fall 2018 issue of The Growler is out now! You can find B.C.’s favourite craft beer guide at your local brewery, select private liquor stores, and on newsstands across the province.