A food lover's guide to Tofino

For those who travel for the food, pack your appetite for a culinary trip as exciting as a bear-spotting cruise (which, by the way, you should also do while you're there). Here's a food lover's guide to eating and drinking in Tofino, B.C.
0
Jul 18, 2018 1:41 PM By: Lindsay William-Ross

No matter the time of year, Tofino's rugged shores on the west side of Vancouver Island are a draw for surfers and surf-watchers alike. Thanks to its fairly remote location, if you're heading to Tofino you're likely staying a couple of days at least, and that means you've got plenty of mealtimes to enjoy.

Enjoying meals in Tofino is by far easier than getting to the resort town. That's because there is a wealth of fantastic restaurants, coffee shops, and brand new spots to check out. Most places offer casual vibes, no matter how fancy the fare, and most also show off B.C. produce and seafood in their dishes. From your morning coffee to your post-boating beers, and few slices of pizza and bowls of noodles in between, Tofino's food scene offers something for everyone.

For those who travel for the food, pack your appetite for a culinary trip as exciting as a bear-spotting cruise (which, by the way, you should also do while you're there). Here's a food lover's guide to eating and drinking in Tofino, B.C. 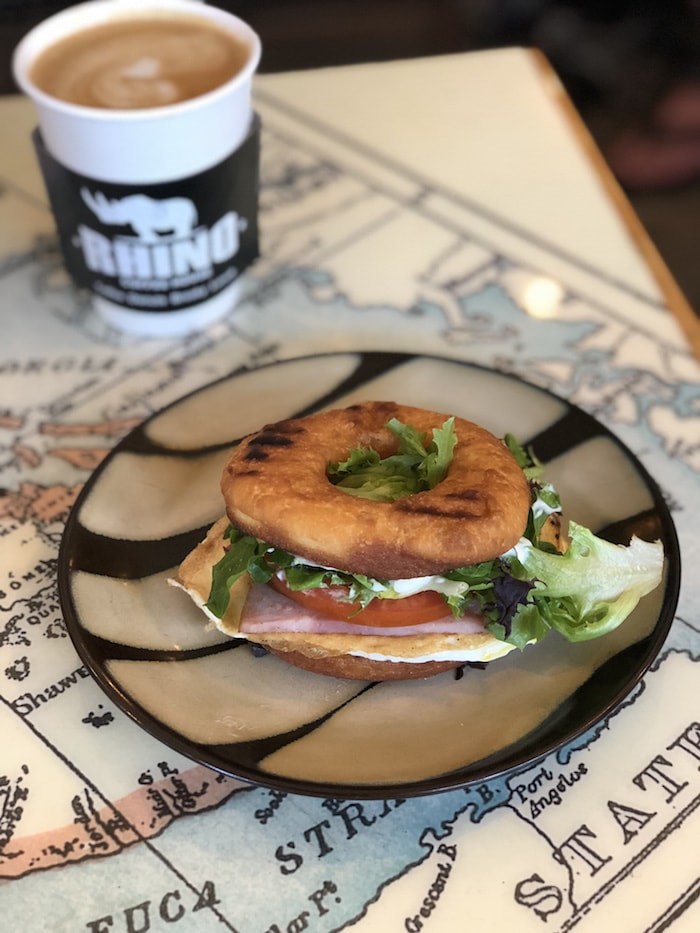 Fuelling up for a day of adventure at Rhino Coffee House in town is a great way to get going. Rhino serves up all-day breakfast, including cheeky egg sandwiches built on bagels or a savoury donut. They've got wraps and sammies, and their signature house-made donuts. And coffee, of course, plenty of coffee. 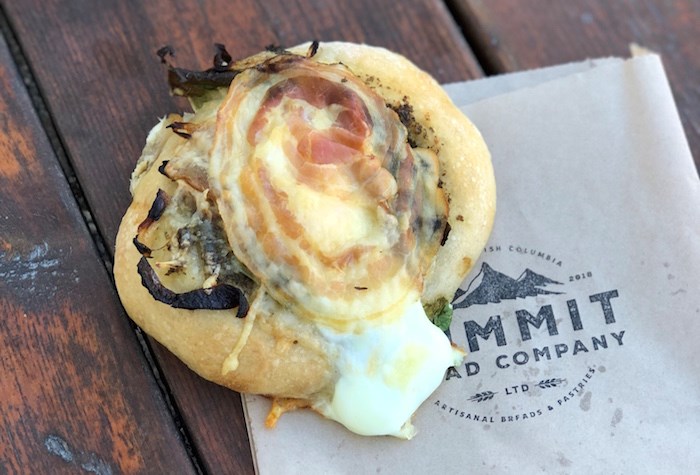 Located on Industrial Way near Tofino Brewing, and next to Tofino Coffee, beautiful fresh loaves of bread and sweet and savoury pastries are available here. Try to choose between fresh fruit danish, almond croissants, sticky buns, cookies, or their egg-topped breakfast buns. 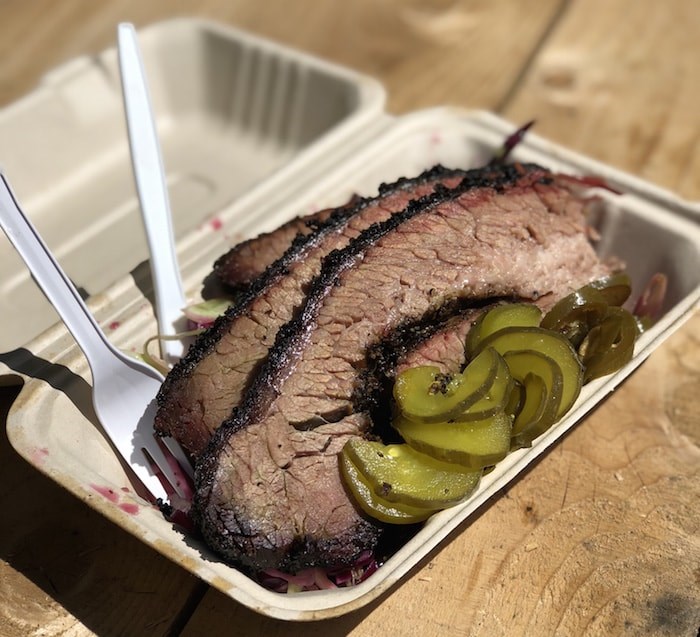 Ronnie Lee came to Tofino from Halifax, ready for a fresh start. He worked in the kitchen of the esteemed Wolf in the Fog in town, but started doing BBQ on the side, until the BBQ business became his full-time focus. Lee hauled a smoker in from Ohio, and perfected his succulent brisket, ribs, pulled pork and sides like fresh tangy slaw, pickles, and creamy mac and cheese, doing pop-ups and catering gigs. Now he's set up at a new enclave of shipping container restaurants at the foot of Campbell Street called Market & Co., and his eats are an absolute must-try when you're in town. PS: Neighbours here include Tuff City Squeeze and Pai Asian Eatery. 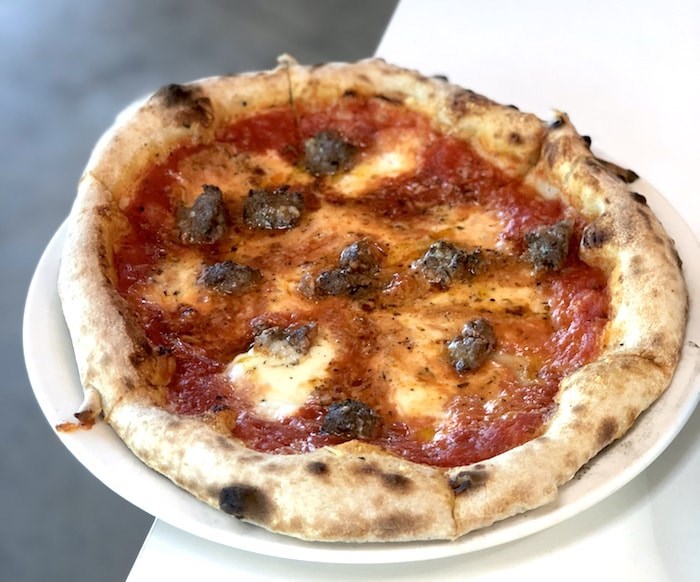 Wood-fired pizzas, handmade by a Naples native transplanted to Tofino, are the star of the show at Basic Goodness, where they serve up the goods until the dough runs out. The simple menu showcases local ingredients, from charcuterie to fresh veggies. 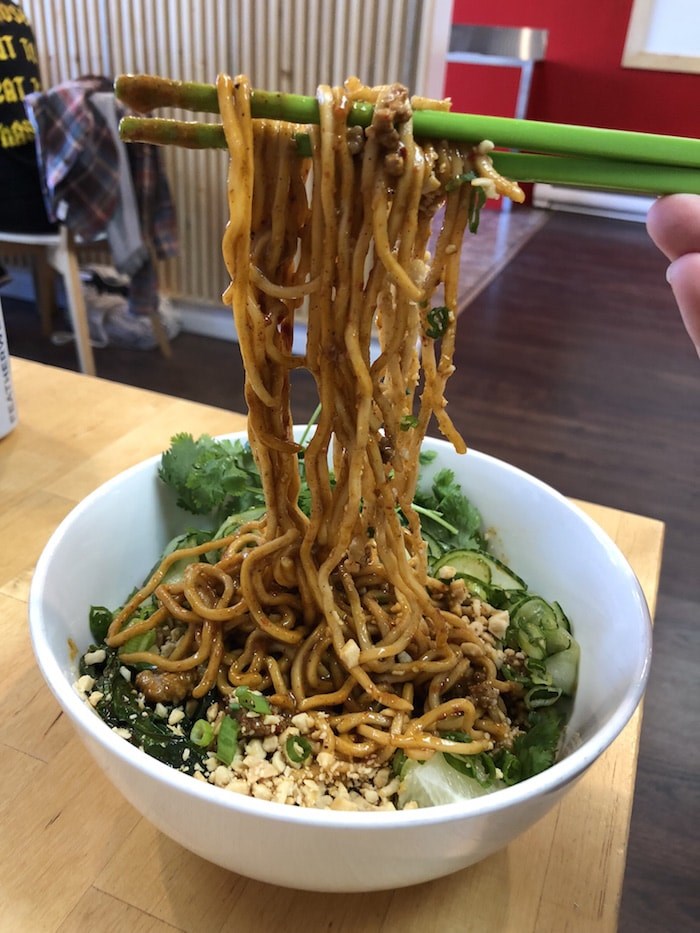 Head over to Main Street to find big bowls of flavourful noodles and tender bao buns stuffed with fillings at Sea Monster. It's a daytime-only spot (open 11:30 am to 6:30 pm daily) perfect for a casual bite. Go for the fiery Dan Dan Noodles; if you've got kids with you they'll love the PB Noodles with coconut peanut sauce. 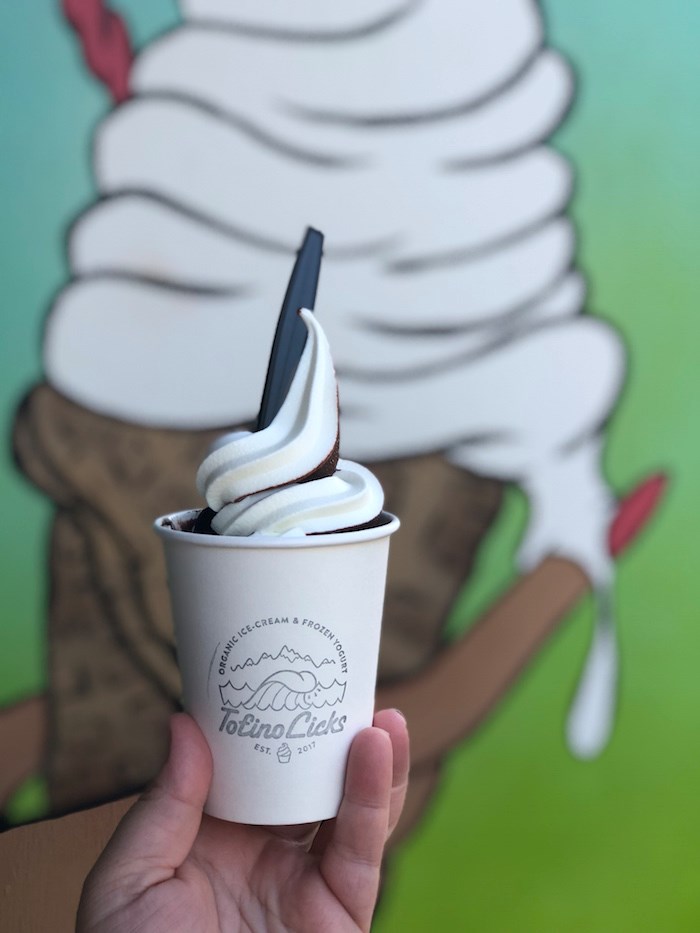 You can get scoops of ice cream all over Tofino, but you need to save room for a treat at Tofino Licks, where they're swirling creamy (or dairy-free) goodness in cups and cones. Tofino Licks teams up with local cafes and restaurants to pair their signature desserts with their soft serve, so you can make a sundae from a spicy Diablo Cookie from Tofino or SoBo's famous Key Lime Pie.

Wolf in the Fog 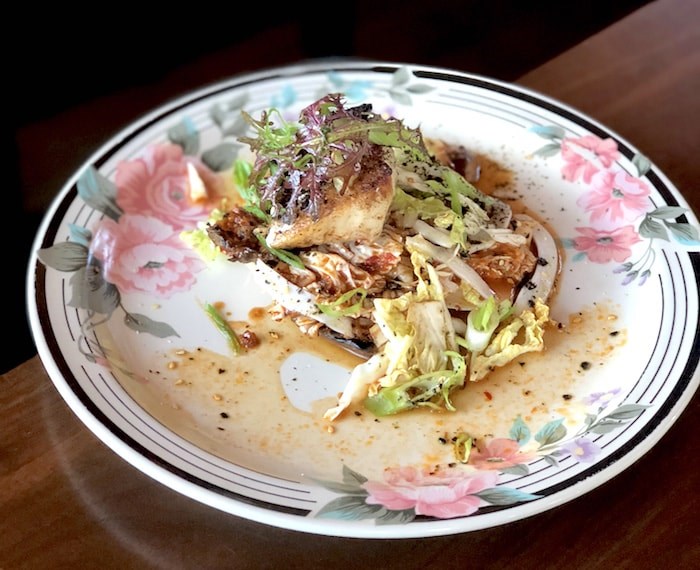 Indulge in a high-end meal (with a laid-back vibe) at the celebrated Wolf in the Fog. Chef Nick Nutting is behind a menu of seasonal and local dishes celebrating bold flavours and the bounty of the Pacific Northwest. They have an incredible cocktail program, which adds to the celebratory feel of dinner (or brunch) at this award-winning restaurant. 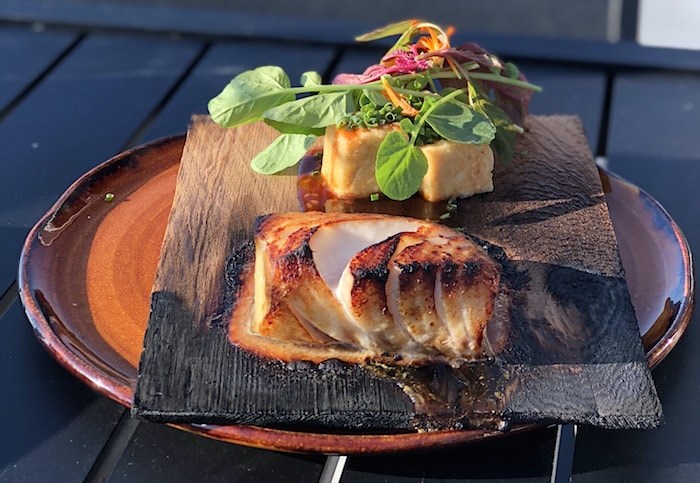 The restaurant at the Tofino Resort & Marina has been making waves since its re-launch not too long ago as 1909 Kitchen. At the stoves is Chef Paul Moran, veteran of Vancouver's West and the winner of the inaugural Hawksworth Young Chef Scholarship, who is cooking up inspired Pacific coastal fare at this unpretentious spot on the inlet. Look for gorgeous seafood dishes, fresh produce from around the region, and a fun dessert sampler. Bonus: You can grab a seat on the patio and relax with your meal as the sun goes down. 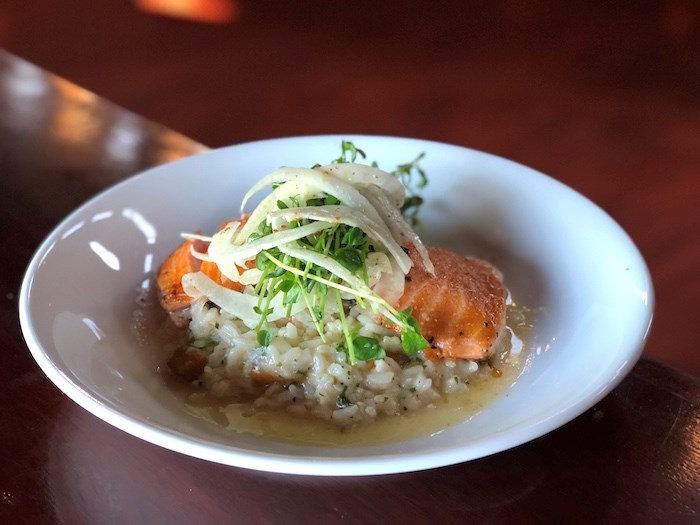 One of Tofino's favourite restaurants is the tried-and-true Shelter in the heart of town. Their expansive menu has something for everyone, from fresh salads to hearty seafood chowder, burgers, pasta, or generously portioned mains. 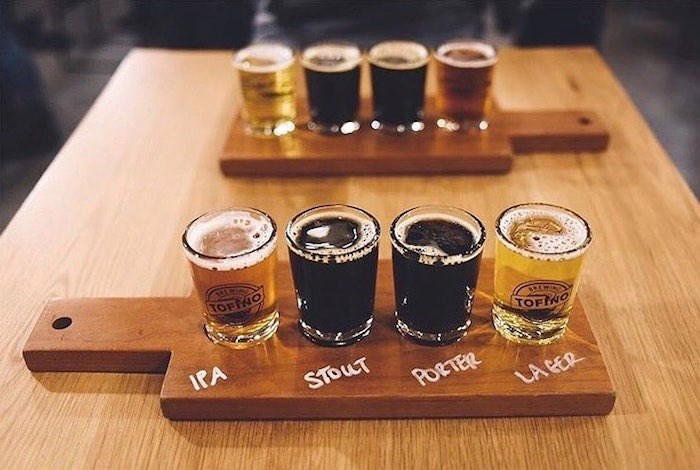 Opened in 2011, Tofino Brewing rode the craft beer wave before the big province-wide boom that followed. This is a must-visit spot for beer lovers. Get growler fills, merch, and beers by the pint or flight. Look for signature pours like their Kelp Stout on tap. Kids are allowed, but they don't serve food, so plan to soak up those suds somewhere else. 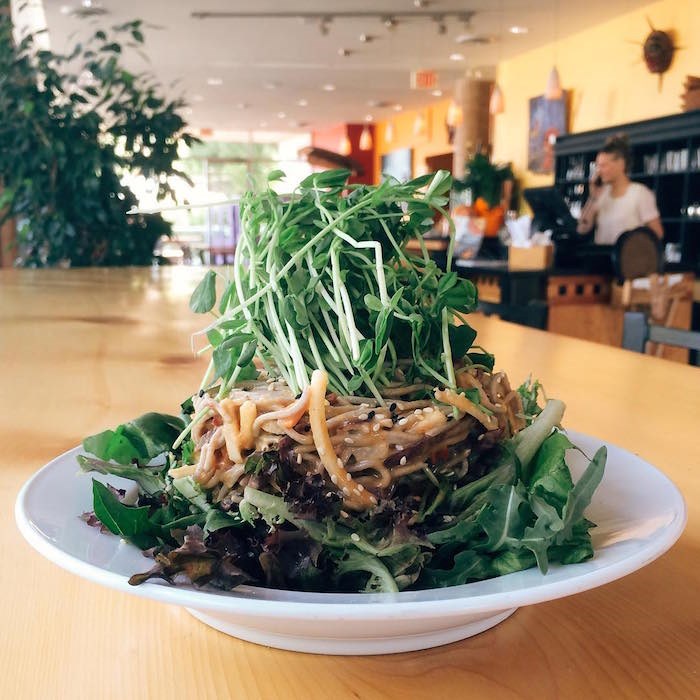 Open for lunch and dinner, SoBo has long been one of Tofino's best-loved restaurants, known for their fresh seafood and globally-inspired menu of crowd-pleasing dishes. By day, you can get anything from fresh oysters to tacos, wraps, and pizzas, while for dinner SoBo has larger composed mains, pasta, salads, and pizzas--with plenty of options anytime for vegans, vegetarians, and gluten-free diners. Save room for something from SoBo's legendary dessert menu. 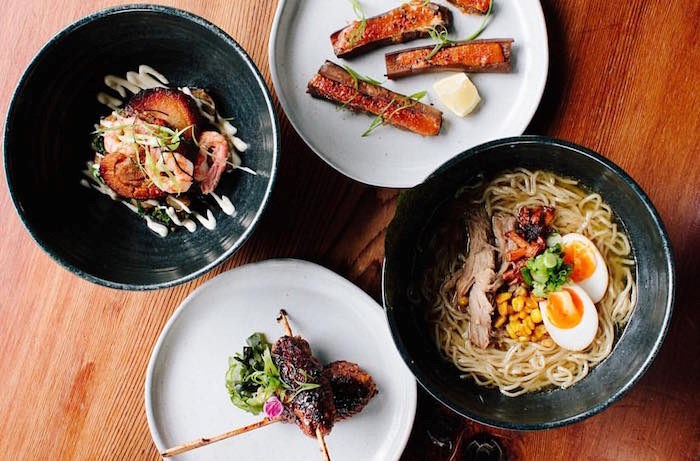 Asian comfort food is on the menu at Kuma. Open for Happy Hour drinks and snacks as well as dinner service, you can dive into bowls of noodles, okonomiyaki, and smaller bites, all designed to be shared.

The Pointe at The Wickaninnish 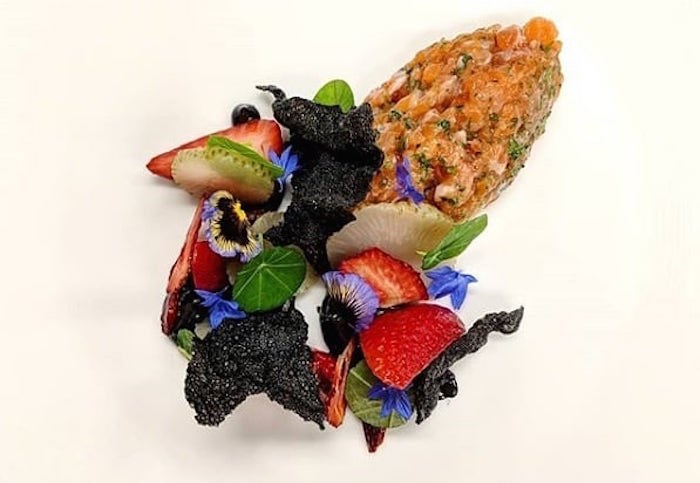 It shouldn't surprise anyone who knows the majesty and luxury of Tofino's Wickaninnish--The Wick, to many--that their restaurant, The Pointe, is the destination for farm-fresh produce, locally-caught seafood, and stunningly beautiful and creative dishes. Be sure to ditch your ball caps and and athletic wear before sitting down to dine--this is a special occasion spot. 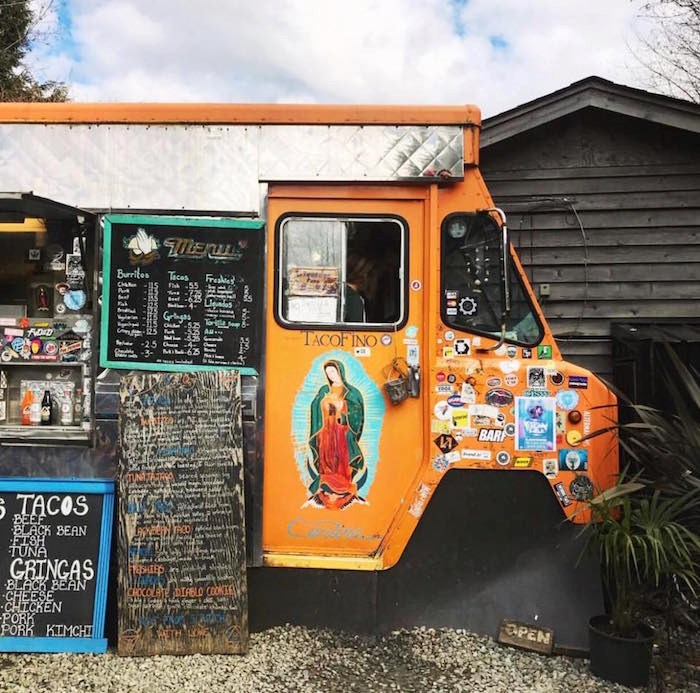 Vancouverites, if you want to get a taste of where it all began, Tacofino's og truck still serves up the eats from its Tofino spot, with a tight menu of tacos, burritos, and gringas (like a quesadilla) available 11 am to 8 pm daily. The fish taco is an absolute must. 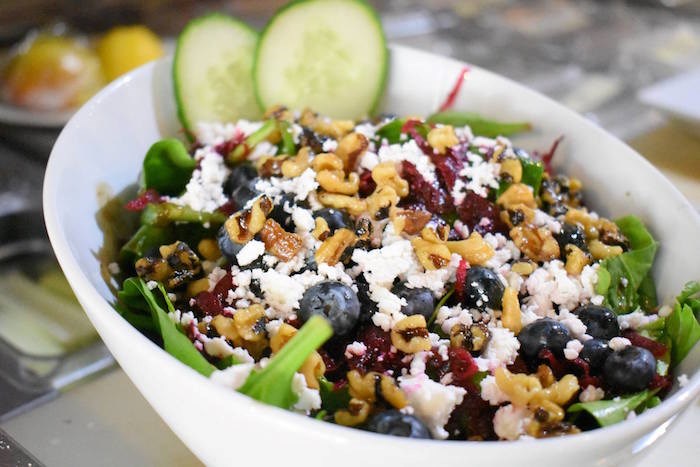 Opened at the very end of 2017, Bravocados offers a completely vegetarian menu, with several options that are vegan or can be adapted to be vegan, as well as gluten-free items, too. You'll find anything from chocolate drizzled waffles to fresh bowls, tostadas, meat-free pulled "pork," and burgers, and creative desserts here, too.