There's no massive sign where the driveway meets the Pacific Rim Highway to mark Hotel Zed's new Tofino location, but it is impossible to miss the place.

The brand, which is known for its quirky and bold approach to design and hospitality, has kitted out the spot that had previously been home to Jamie's Rainforest Hotel in big, bright panels of colour on the exterior, and has a neon magenta log-emblazoned VW bus parked out front. The $20-million "groovy" makeover has lots of folks talking.

Even in Tofino's signature fog, Hotel Zed stands out.

But there's something else signature in Tofino that Hotel Zed brushed up against before they even thought about those first coats of paint. Tofino is notoriously against chains and franchises.

Hotel Zed is the "cousin" of B.C. hotel chain Accent Inns. The Tofino location marks the third in its portfolio, which began in Victoria and continued in Kelowna.

Spearheaded by Accent Inns CEO Mandy Farmer, Hotel Zed's m.o. is to purchase an existing hotel or motel property and flip it, with modern updates to the decor and quirky amenities that align with their "Rebels Against the Ordinary" motto.

While the full renovation isn't yet completed, and some amenities still to be implemented, Hotel Zed Tofino officially opened their doors at the end of August, capping off what has been a most unusual summer season for the surfer's paradise town.

The curb appeal of the hotel is undeniable, but when I spoke with locals about the project, a few of them were quick to point out that the project ruffled more than a few feathers when they announced their plans to take over Jamie's. 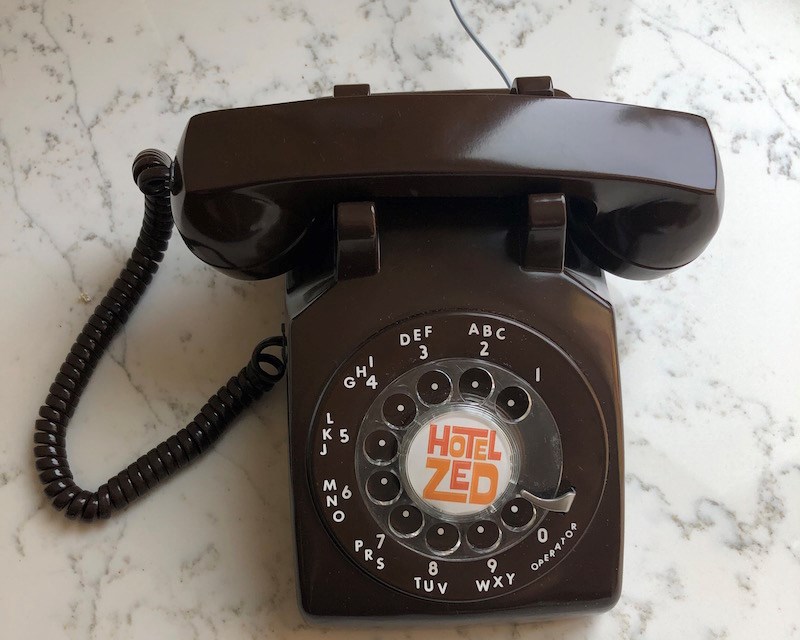 Your room has a rotary phone. Do you know how to use one? Photo by Lindsay William-Ross/Vancouver Is Awesome

While I'm not a local, I can appreciate where they are coming from. But here's the thing - I don't get the sense Hotel Zed is paying Tofino lip service. That's because their attention to detail and their focus on both out of towners and locals alike is clearly evident.

Seated in the sunken living room-styled lobby, with its shag carpeting and luxe 60s rec room vibes, I caught a glimpse of a woman on her bicycle riding in on a swath of thick, colourful carpet runner. The runner is no ordinary piece of decor - it's actually a bike carpet, designed for cyclists to ride right through the lobby and past the front desk on their way to and from the street-side Multi-Use Path (MUP) that goes through Tofino. I'll admit, that was a trip first for me - a bike carpet!

In any case, the woman was speaking with some hotel staff (and I was, admittedly, within easy earshot) and it turns out they all knew each other in some way or another. Her query, though, was to my point: "Can locals hang out here?"

The answer was an immediate and emphatic yes.

And why wouldn't they? In just the lobby alone there are spaces like a retro arcade room (with old school Donkey Kong and the like), an illuminated DIY DJing dance room, and a "psychic's corner" where they plan to install a guest tarot card reader from time to time.

Eventually, too, Hotel Zed Tofino will have an on-site restaurant, which will also be a draw for residents as well. Still under construction, during my visit, the staff said they were not being told what the restaurant concept will be and could not give me any details, so I came home crestfallen I couldn't share that tempting tidbit. However, I've since learned this restaurant is going to dial things up a few notches; lest I be sharing before I should be, I will say a key player involved is a familiar name on the Vancouver dining scene and a champion of all things Canadian and regional, and the restaurant will be the first in Tofino to feature live-fire cooking, both indoors and out. Very exciting indeed, and should be up and running in 2021.

But back to 2020 and what's at Hotel Zed Tofino now. In fact, I think where we left off I was still in the impressive lobby. I haven't even mentioned the old Mad Men-style "office" area, outfitted with a massive desk from the Farmer family itself. The desk even has a Rolodex loaded with important local numbers (i.e. pizza delivery and cab services) and a rotary phone, another hallmark of the Zed brand - you'll find one in your room, too.

The rooms, which are not massive but very well-appointed, are comfortable and as thoughtfully styled as the rest of the property. A custom-printed book tells the story of eco protestors in the 1990s, and the coffee you brew in your room is fresh ground from Rhino, a local staple (done in a French press - leaps and bounds better than any pod or packaged filtered option, hands down). The sense of place is on point. The throwback vibes are uncanny. The details are mind-blowing. I can't think of the last time I ever crouched down to the floor to take a photo of the tiny mid-century modern foot on the bathroom vanity fixture where it's gold tip met the multi-coloured hexagonal-tiled floor. 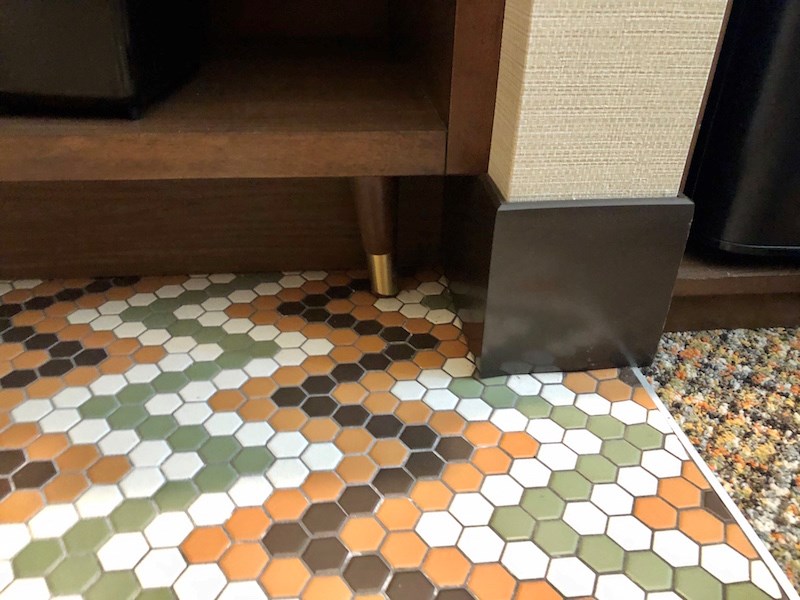 The foot on the bathroom vanity meets the tile, which meets the carpeting. Photo by Lindsay William-Ross/Vancouver Is Awesome

My stay was definitely comfortable, and the staff absolute stars. In addition to their warm greetings in the lobby for us and all the other guests, the Hotel Zed Tofino team graciously helped me through an unprecedented panic when I thought I'd be accidentally locked out of my room's own bathroom. I suppose the upside to that debacle (instigated when my seven-year-old accidentally pressed in the lock button) is that said seven-year-old was introduced to the joys of not only using a rotary phone to call the front desk, but also the practice of asking for help when you make a mistake. I'd like to think we all learned something that day.

Tofino is itself a quirky place, with its remote locale and a strong sense of identity. A stay at Hotel Zed puts you at the doorstep of all things awesome in Tofino, including the MUP and Chesterman Beach - which is pretty much right across the street and within walking distance. Hop on your bike for a ride to a favourite trail or for dinner at Lil' Ronnie's BBQ at Mackenzie Beach. Though the restaurant is still to come, you're still in town to enjoy Tofino's numerous top-notch restaurants and treat spots. There are outdoorsy activities galore to venture off to, from hiking to whale watching, surfing to paddleboarding, or just taking a stroll along Tofino's many iconic beaches.

And when it's time to head back in for a nap or the night, it's always easy to spot where to make that turn off the highway for Hotel Zed. It sticks out...for all the right reasons.

Thanks to Hotel Zed Tofino for providing a two-night stay; all opinions and inclusions are those of the author’s and were not guided or influenced in any way, and the business was not granted any previews of the story prior to publication.