BETA5 has been treating Vancouver to its inventive chocolates and pastries for several years. Now they finally have the retail and cafe space to match. 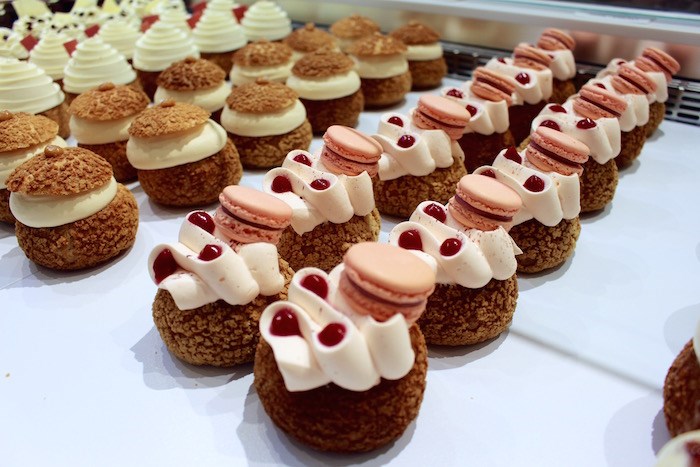 The cream puff is BETA5’s signature pastry. Photo by Lindsay William-Ross/Vancouver Is Awesome

Pristine orbs in shimmering hues, geometric bars with creatively-flavoured chocolates, whimsical sweet treats, and those stunning cream puffs...BETA5 has been treating Vancouver to its wildly inventive and visually arresting chocolates and pastries for several years. Now they finally have the retail and cafe space to match.

BETA5's Adam Chandler and Jessica Rosinski have wanted to open a proper pastry and chocolate cafe since before BETA5 was even born. But, as Chandler explained during a pre-opening tour, once the business launched, things didn't go exactly as imagined - but that's not to say that wasn't a good thing. 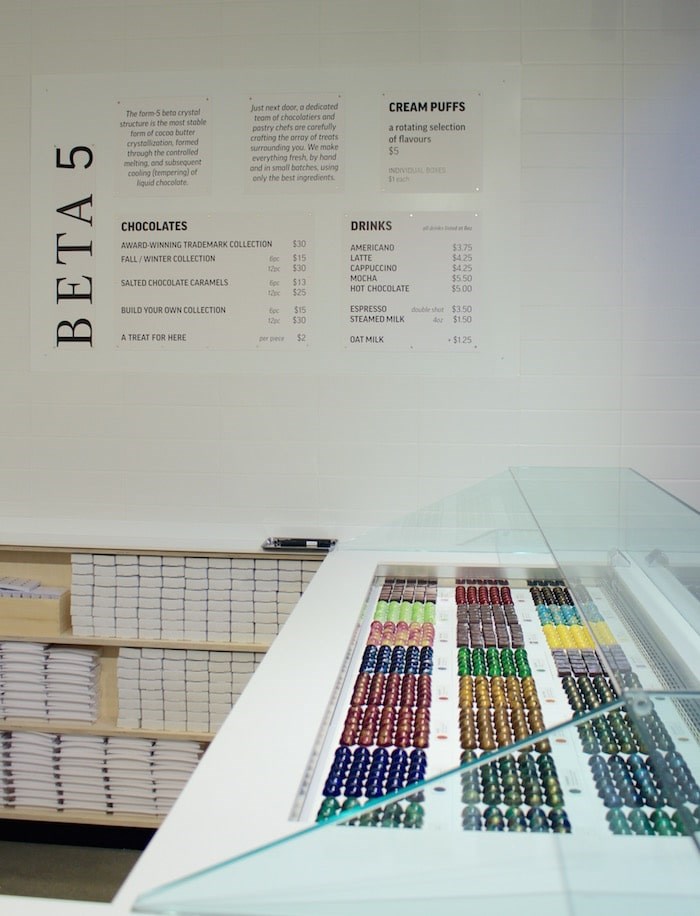 Inside BETA5’s new retail and cafe space. Photo by Lindsay William-Ross/Vancouver Is Awesome

It's no secret that "location, location, location" is the real estate mantra, and for retailers and food purveyors in Vancouver, the saying rings true. Chandler says finding the right space was in part what kept BETA5 from growing out of its makeshift storefront set up in their commissary space on Industrial Avenue for so many years.

In the interim, Chandler narrates a constant adaptation and experimentation with what BETA5 could offer customers. Out of necessity, Chandler and his team came to learn the best ways of doing things both in the kitchen and as a business - the latter something that's definitely not taught in culinary school. 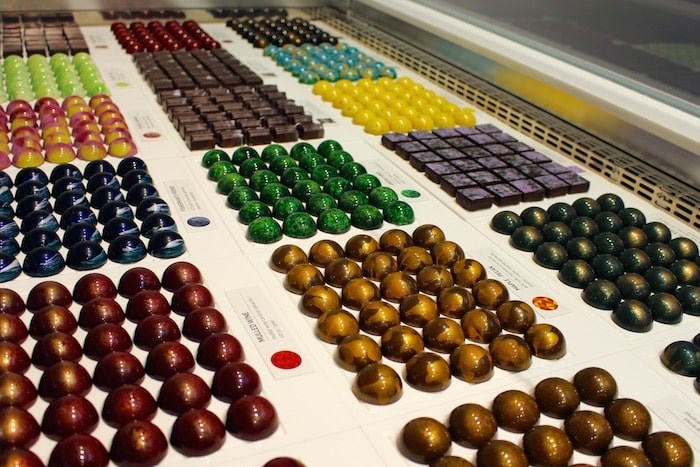 Beautiful chocolates at BETA5. Photo by Lindsay William-Ross/Vancouver Is Awesome

While the BETA5 team was figuring out how to make the less exciting aspects of a sweet treats biz run efficiently (ingredient costs and ordering methods aren't front of mind when you sink your teeth into a delicate choux pastry puff filled with flavoured cream), outwardly they were making tweaks to carve out a name for themselves and give customers a unique and delicious experience.

When you walk into the new BETA5 retail space and cafe, you'll first see a custom refrigerated display case filled with perfectly lined rows of their stunning filled chocolates in their signature circular shape. Then you'll see a companion case loaded with rows of their beautiful cream puffs around the bend. (At this point if you aren't already wide-eyed, something might be wrong.)

But cream puffs weren't always on the BETA5 menu. Chandler explains that what's now their calling card creation came out of needing to diversify in the warmer months when fewer chocolates were selling at the shop, and a desire to veer from the then-popular treats like cupcakes and macarons. Enter the cream puff. 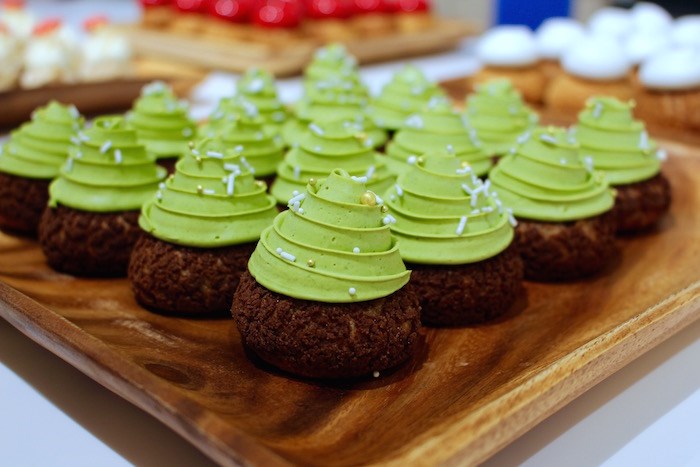 BETA5 took things up another notch when they added ice cream, and ice cream sundaes, sandwiches, and summertime "socials" in order to further keep things humming at the shop in the summer. They even set up pop-ups to see how they might fare in other parts of town - including where foot traffic was a real prospect, unlike where they were and are, in an industrial area in Strathcona.

"This is the starting point for us now," says Chandler of BETA5's new cafe space. They've launched hot chocolate on the menu, and have seating, and are perfecting what Chandler hopes to be a successful prototype for replicating the cafe/retail space in an additional location, or locations. Chandler does like to think big, he admits, though he has learned to "calm down his ideas" over the years. 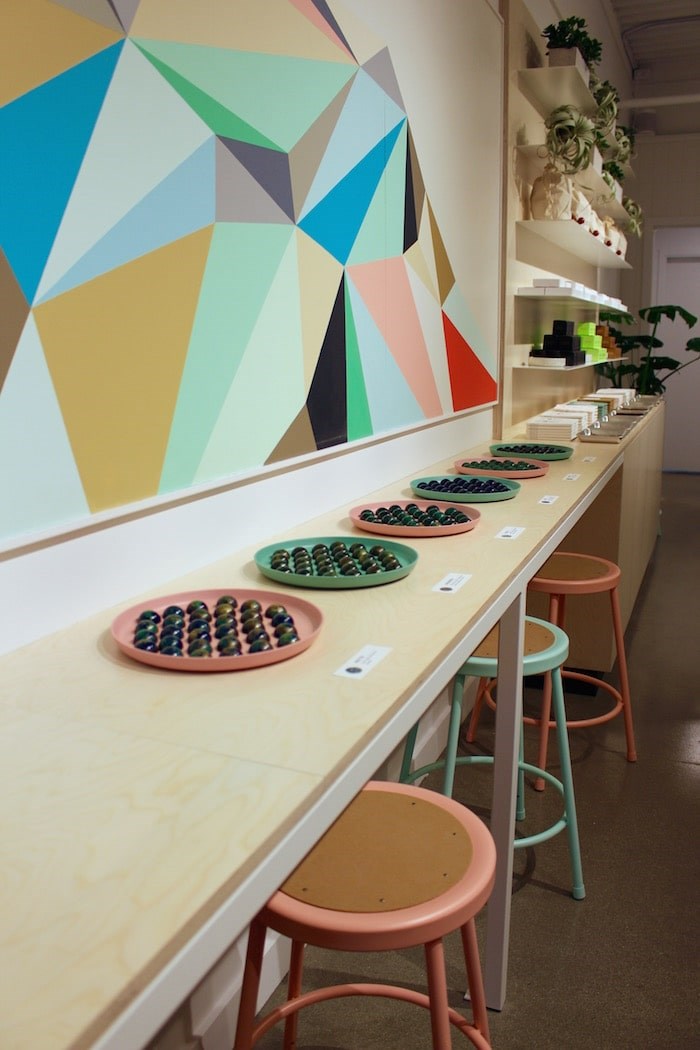 Seating along the side wall inside the new BETA5 space. Photo by Lindsay William-Ross/Vancouver Is Awesome

When it comes to the eats, Chandler's creativity, and the valued input and expertise of BETA5's longstanding staff, continues to evolve, but remains rooted in the notion of playfulness.

Take their Christmas 2019 line-up, for example, which includes things like a shimmery red "Rudolph's Nose" and a 12-pack of chocolates with flavours like Gingerbread, Cannoli, and Milk Tea. Chandler explains that the theme this year stems from the concept of Santa travelling around the globe to deliver gifts. So in Hong Kong there's Milk Tea, and in Italy there's cannoli - not your typical Christmas flavours, but not too bizarre or unapproachable, for certain. Plus, they're a welcome break from the steady flow of peppermint and egg nog you see that time of year (though, fear not, you'll find those flavours in the BETA5 shop, too). 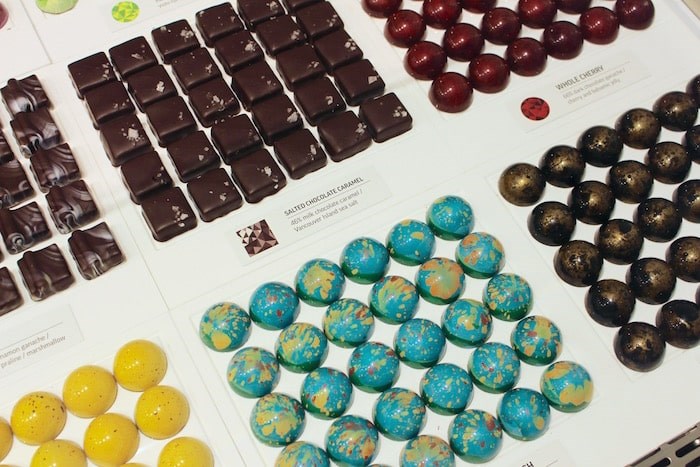 Chandler says they start dreaming up Christmas plans as early as June - a good reminder that the best things come with time and patience. "You can't rush that process otherwise the end result isn't that interesting," says Chandler.

The same can be said of BETA5 and their new cafe, which opens its doors officially on Saturday, November 16. A case study in the long game, BETA5 is now more of a veteran than a newbie, and they've built a loyal following with room to spare for new fans. 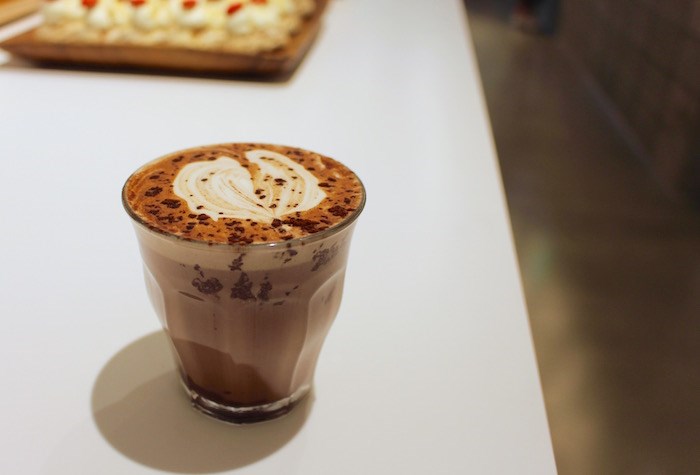 Hot chocolate is now on the menu at BETA5. Photo by Lindsay William-Ross/Vancouver Is Awesome 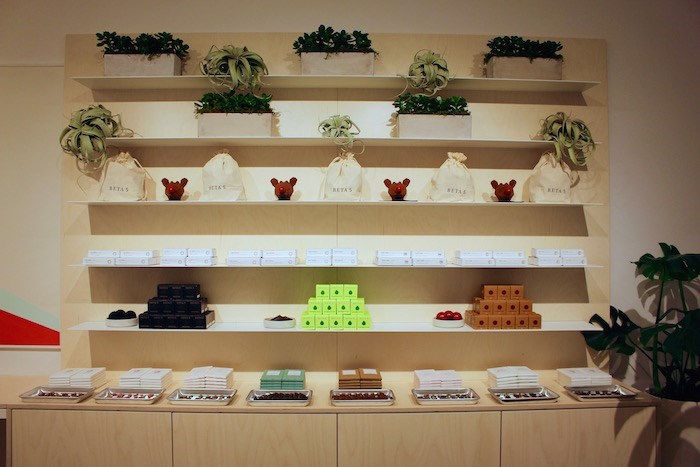 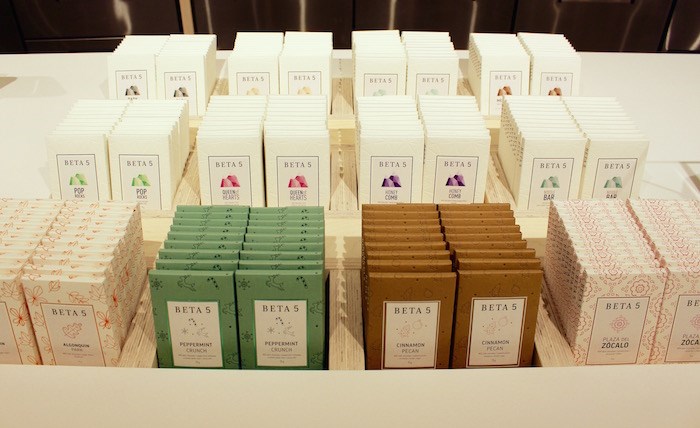 BETA5 2.0 is located at 409 Industrial Avenue, adjacent to their original retail storefront (which will no longer be open to the public at 413 Industrial). Operating hours are Tuesdays to Fridays, from 10:30 a.m. to 5:30 p.m. and Saturdays and Sundays from 10 a.m. to 5 p.m.