Brewer vs. Brewer: The pandemic edition 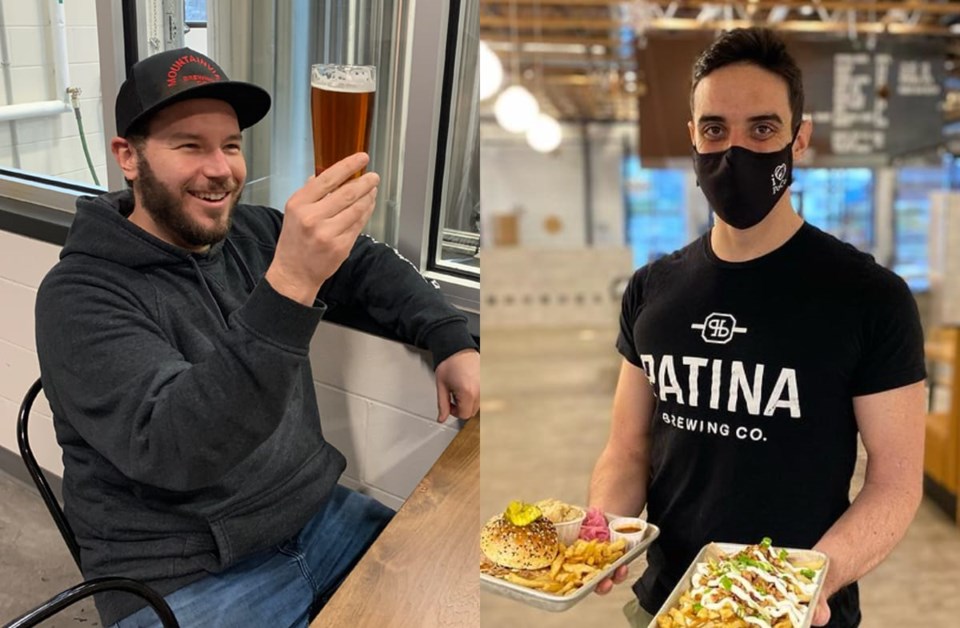 Adam Keil (left) and Will Tanenbaum talk with B.C.'s The Growler about the challenges of opening a brewery during the COVID-19 pandemic. Photos supplied

We decided to check in with two breweries that launched in 2020 to get their takes on what it was like to open their doors during the pandemic. I spoke to Will Tanenbaum at Patina Brewing, which opened on March 6, and Adam Keil from Mountainview Brewing in Hope, which opened on November 24. Because of COVID-19-related travel restrictions we met up via Zoom.

I kicked the interview off by asking Will what it was like to open just as the pandemic arrived.

Will Tanenbaum: We opened the restaurant March 6. The brewery itself wasn’t operational yet because we were waiting on a thousand-amp Hydro upgrade. We were classically behind on the construction schedule. We’d done some contract brewing so we had four brands in the market at that point. The first weekend we were doing great and then 11 days later the pandemic shut things down. As a result we had to go to a takeout-only model with the restaurant and lay off all of our non-salaried staff. Without the brewery operational that put me into the kitchen. Prior to that I’d been project managing the construction side of things so in between trying to assuage Hydro’s concerns about whether or not it was a safe environment to work in, I’m putting baked beans in to-go cups, trying to manage all that for 16 hours a day. The classic brewery position of “other duties as necessary.” It was a mess.

That was the routine until late May when we got to open the taproom back up. The brewery finally opened with the Hydro upgrade in late July and our first batch was brewed July 31.

Adam Keil: When the pandemic struck we were still in construction phase. Originally we were hoping maybe we’d get some batches going by June, but pretty much all work stopped. We couldn’t get contractors out to do anything. Hydro needed to move a pole for us and run the line underground but it was like pulling teeth. [Will chuckles knowingly] It was definitely stressful, the uncertainty—you have a game plan for your business and then you have to rethink it all. Is this model we have even going to work? Are we going to be able to open at all?

In the end, it all came together. We do have our lounge open, but our occupancy isn’t super high. It went pretty good through Christmas, but obviously now it’s January, historically a terrible month for beer sales. We’ve been just trying to get creative. We’ve got a small kitchen—we’ve got some sandwiches and share boards and stuff. It’s a pretty limited menu but we’ve been trying to run some stuff to attract some people to come out.

Joe: What was it like adjusting to the changing rules throughout the year?

Will: I remember when the initial lockdown started, we were like, “OK, I guess we’re taking this seriously for the next week or two…” [laughs] But one of our owners who had worked in Toronto running restaurants during SARS said, “We should be prepared. This could last through May.” We didn’t have any online ordering capacity at the time. If you look at the BC Brewers Collective Facebook page everyone is sharing information, everyone’s kind of adjusting on the fly while trying to obfuscate it from the customer because obviously you don’t want to look too much like you’re flying by the seat of your pants.

In the summer, Port Coquitlam gave us the use of the lane beside our building so all of a sudden we had a giant patio and we had pretty decent weather so we were able to use that. I really think we ended up about as lucky as we had any right to have been.

Adam: Our opening was late November so people were kind of used to the routines, wearing masks and stuff. That part wasn’t too bad because people had an expectation that we were going to have stringent rules. We’re lucky that we have a really big space. It’s an old warehouse, the ceilings are 20’ high, and based on square footage we could have many more people in here, so people are feeling pretty comfortable coming into the space still.

Our expectations for can sales were blown out of the water. When we opened up we canned a little and thought that’ll be lots—we’re not going into any stores, it’s all going to be in-house sales right now. Within a couple of weeks we sold out of all these great products that are selling really well. So we’re expanding our can lineup. We’re getting the mobile canners in next week so we can pump out 35 HL in a day rather than spreading it out over three days [on a manual canning system].

Will: We’re lucky enough to be next door neighbours with Mile 37 [Craft Canning] so back in February he was trying to sell me on this crowler thing, and I was like, yeah, I don’t know. My plan was really not to bother with cans until six months in at the earliest. Then COVID-19 hit and the only way we had to sell beer was growlers. Then the lag times on getting more growlers started tailing out. At one point we were filling Mason jars that we were buying at Canadian Tire. It was terrible. It was every self-respecting brewer’s nightmare. So we got the crowler seamer and were doing all these crowlers, and then there was a crowler shortage so we were flip flopping back and forth between formats for months. We only ended up doing our first 473-ml can run with a mobile canning company just before Christmas.

Joe: Adam, I assume the fact that a lot of tourists drive through Hope was part of your business model?

Adam: That was the whole model in a sense! Last summer, even with COVID-19, it was one of the busiest summers we’ve ever had in town as far as actual traffic, so I’m hopeful—we just gotta get to May. In the beginning we were getting a lot of out-of-town people still, but when they said you’re not supposed to leave your health region any more, that was a big turning point.

Joe: With hindsight would you have delayed or done anything differently?

Adam: We were already behind schedule for so long, we felt like we just had to open and figure it out, start having some revenue coming in. On the other hand, it’s such a gong show in Hope in the summer with tourism so it’s kind of nice to have it a little quieter right now so we can work out all the kinks in terms of the lounge side. It’s good and bad. You want to sell tons of beer but at the same time we don’t want to be caught flat-footed in May when the population here quadruples for three months.

Joe: Do you have an optimistic message to end on?

Adam: I don’t think it’s going to last forever. That being said, it’s probably not the last time we’re going to find ourselves in a situation like this so hopefully we’re all a little more prepared next time. For new breweries, being able to be flexible and adjusting your expectations that you might have to change things on a dime. If you go in with that kind of mindset then it’s not as shocking as trying to stick to your guns and have this plan, and then you get a wrench thrown in there. If you’re expecting the wrench every step of the way then I think it’s a bit easier to deal with.

Will: [laughs] I love that: expect a wrench. The other thing I’d tack on to that is, you know, craft beer isn’t dead. There is so much education and demand that can’t be unravelled. We’ve come a long way since the ‘80s and I think if something like this had happened in an earlier time when craft beer was more exclusively a luxury product then I think it could have been pretty ruinous to the industry in general. What are you seeing now if not the resiliency of so many businesses? It really made us examine the fundamentals of our business model in a way that if you’re making a lot of money maybe you’re not looking quite so closely. I’m sure that whatever breweries are thinking about opening are thinking long and hard to make sure what they’ve got planned out is sensible and sound. I feel optimistic about that. It’s cliché to say we’ll emerge stronger for it but I do believe it.

This story originally appeared in the Spring/Summer 2021 issue of The Growler, out now! You can find B.C.’s favourite craft beer and cider guide at your local brewery, cidery, select private liquor stores, and by subscription here.