That bright yellow building on Granville Island is a landmark by sight, and also a marvel for having been open for nearly 40 years. Now Bridges restaurant has a new owner and is destined for a revamp--but it's going to stay all in the family.

That bright yellow building on Granville Island is a landmark by sight, and also a marvel for having been open for nearly 40 years. Now Bridges restaurant has a new owner and is destined for a revamp--but it's going to stay all in the family. 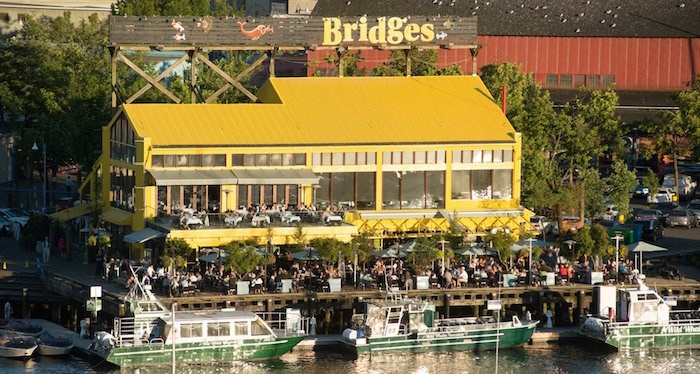 Bridges has been purchased by Daniel Frankel, the found of Tap & Barrel (and its various off-shoots, like Brewhall and TapShack), but it's not a spot that's unfamiliar to the serial restaurateur.

The story of Bridges goes back to the mid-70s, when Frankel’s Uncle Michael Seelig and Nathan Divinsky, both UBC professors, came up with the concept for a pub-style restaurant. They eventually joined forces in 1979 with partners  Abe Sacks, Manny Glasser, former Canadian Prime Minister Kim Campbell, and, later, Frankel’s parents George and Tamara.

“Bridges is what moved my family to Vancouver in 1979. I have had a strong emotional connection to Bridges and Granville Island throughout my life," explains Frankel in a media release.

The restaurant opened in 1980, has has been a go-to for celebrations, patio sessions, private events, and tourists for years. But things are about to change a bit...Bridges as we know it will continue to operate on the upper level of the restaurant, while the ground floor space and menu will be re-invented to appeal to today’s locals and visitors of Granville Island alike.

Other recent changes on Granville Island include the recent addition of the shipping-container fast-casual/fine dining hybrid Popina Canteen, run by a group of high-profile local chefs.

And one thing we know won't change is that excellent patio space.

"I fell in love with the alfresco dining concept, which Bridges pioneered," adds Frankel. "It inspired me to build these expansive patios that bring the community together and create an unprecedented energy.” It's worth noting, Tap & Barrel's patios are well-positioned, like on False Creek in Olympic Village, and one of the region's biggest year-round patios recently opened at his North Vancouver T&B outpost.

Frankel and his crew have been very busy, too. They recently opened Brewhall, a casual beer and grub spot in the former Steel Toad space in Olympic Village.

For now, Bridges will continue to operate business as usual until the renovation plans are finalized.