In praise of the big little brunch at Vancouver's Burdock & Co.

Burdock & Co. puts on a beautiful weekend brunch, and they don't need a speck of the "big"-ness that seems to catch Vancouver diners' eyes, because they're serving the realness with their food.
Aug 2, 2019 9:44 AM By: Lindsay William-Ross

I don't know why, but brunch for me often connotes big-ness. Big plates, big line-ups, big meals, big noise in big rooms. Of course, I'm probably just swayed by Vancouver's "big" brunch culture, and our love of epic dishes we are willing to wait in long lines for, weekend after weekend.

So when you can get super-Instagrammable heaps of saucy meat piled high on massive slabs of French Toast hugged by moats of sticky syrup after 90-minutes of shuffling your feet on a Vancouver sidewalk, how does a more modest - a less "big" - place like Main Street's Burdock & Co. stack up?

The answer is: Impressively. 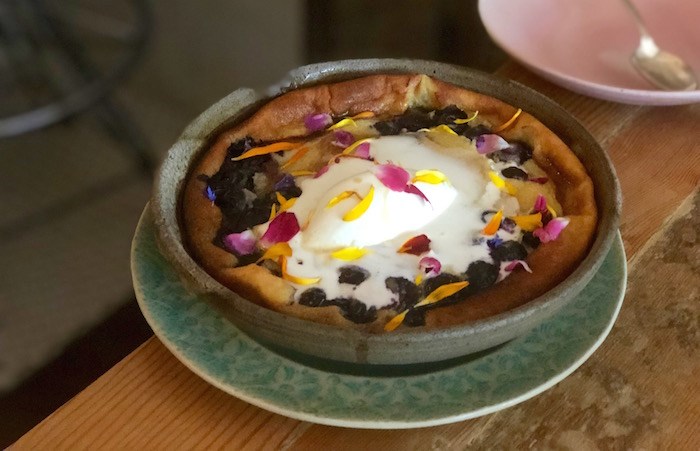 The French Pancake at brunch at Burdock & Co. Photo by Lindsay William-Ross/Vancouver Is Awesome

Rewind to 2018, when Burdock & Co., Chef/owner Andrea Carlson's renown "farm to table" Mount Pleasant eatery, took the gold in the Brunch category in the Vancouver Magazine Restaurant Awards. The Vancouver foodie world was a little shook. In fact, Burdock had to have been a little shook - they had actually stopped serving brunch by the time the award was announced.

Needless to say, Burdock brought brunch back in 2018, and at a recent visit, their might was affirmed.

A little housekeeping before we continue: There was no Brunch category for the 2019 Van Mag Restaurant Awards, which means Burdock still holds the title, though they did nab gold in both Best Neighbourhood - East Side and Best West Coast this time around.

Burdock & Co. puts on a beautiful weekend brunch service in their slender, dimly-lit space, and they don't need a speck of the "big"-ness that seems to catch diners' eyes, because they're serving the realness with their food. 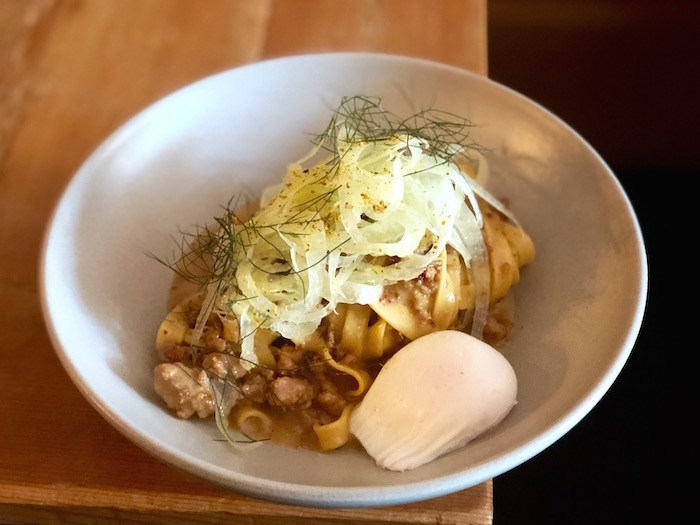 Fettucine for breakfast, with pork and fennel ragout and an egg on top. Photo by Lindsay William-Ross/Vancouver Is Awesome

The brunch menu melds familiar a.m. classics with Burdock's dinner menu, which itself is a study in sophisticated applications of regional ingredients with gentle globally-inspired touches. Go the full Portlandia and put an egg on their beautiful house-made fettucine with a pork and fennel ragout (this is the dish TV's John Catucci put on his new Big Food Bucket List and nearly licked the plate clean, he confessed). The dish is creamy and hearty, brightened with hints of fennel pollen and the herbal twang of shaved anise.

While you might think congee is the domain of your go-to dim sum spot, Burdock serves up their rendition of the traditional rice porridge with the very Vancouver bold punch of an XO sauce made of mushrooms, and the sweet nuttiness of whole salted, skinless almonds. The dish on its own is vegan, though you can opt to add a fried egg to bump up the layers of texture and flavour a small notch. 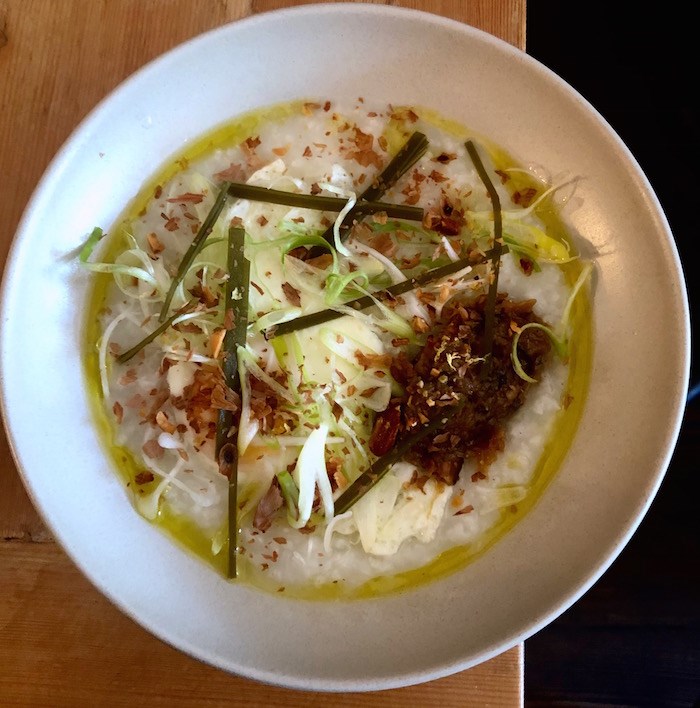 The congee is vegan without the egg. Photo by Lindsay William-Ross/Vancouver Is Awesome

Also on offer are staple dishes like Eggs Benedict, a frittata, avocado toast, and baked eggs. Burdock's signature fried chicken dish also is available at brunch - it's a favourite that is most welcome at any time of day.

One dish that Burdock's brunch fans won't let the restaurant mess with or take off the menu is their French Pancake. While "French Pancake" might lead you to expect a paper-thin crepe, this is nearly the opposite - it's more of a clafoutis, which is a fruit-studded custard-like dessert. Taking one of these beauties down solo would take a true sweet tooth, so get a spoon in the hand of everyone at the table to tackle this creamy cast-iron pan dish. They use seasonal fruit, so for summer it's berries that sweetly interrupt the velvety interior that gets progressively unctuous as you eat your way to the centre. 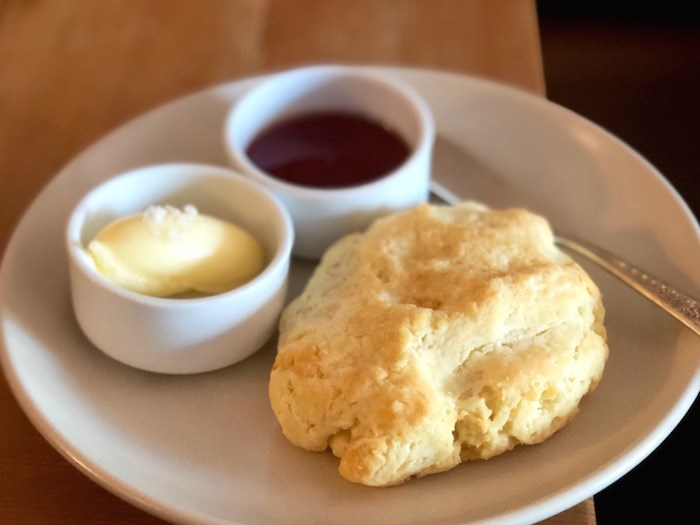 Biscuit with jam and butter. Photo by Lindsay William-Ross/Vancouver Is Awesome

The house coffee is strong and quite good, and they also serve up brunch cocktails for a little weekend midday toasting. Speaking of toast, or even just breads, take the server's suggestion of starting off with a house-made gluten-free biscuit, served with their house-made preserves and butter; alternatively, they have slabs of soda bread you can carb-load with on their own or as served with some of the entrees.