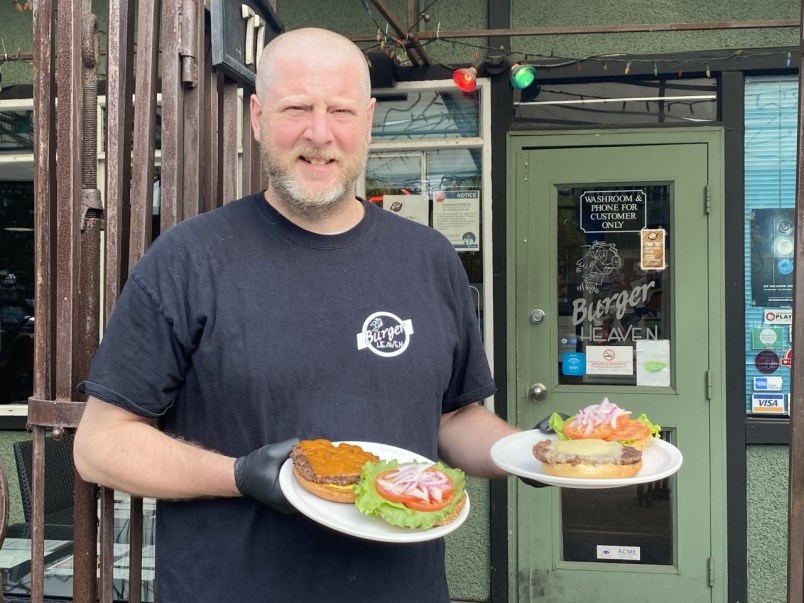 Burger Heaven manager Chris Geib took off his face mask long enough to show the Record some of the burger selections available in the newly launched (b)un-official provincial election burger poll. Diners can vote for their preferred candidate when they dine in or get take-out (not delivery) at the New West eatery. Photo by Theresa McManus

A New Westminster is once again giving folks a chance to vote with their mouths.

“We will be doing it through take-out and dine-in only,” said manager Chris Geib.

Customers can now vote for the “flavour-ite” candidate in the poll that runs until Friday, Oct. 23. Here’s how Burger Heaven describes the burgers it’s serving up for the Oct. 24 provincial election:

The John Horgan Burger – BC NDP

To spice things up this tasty Nicely Done Patty of “lean-to-the-left’ Grade A “premier” beef is attempting to gain ‘ground’ on the front left burner as it stirs the pot in its attempt to secure a majority leadership in the B.C. government. This burger includes strong o(u)nions, fresh red tomato, sharp slice of B.C. mozzarella and a dollop of H-organ-ic mango habanero sauce. “Lettuce continue to lead and we’ll relish the opportunity to whet the voter/eater appetite with our platter-form of policies.”

This lean-to-the-right Grade A burger is sizzling on the right-centre burner and creating lots of heat in the political kitchen as it strives to take a ‘bite’ out of the NDP burger and regain leadership of the B.C. government with a zesty platter-form designed to appeal to the voter’s/eater’s appetite for change. Very well-seasoned, this burger hopes to ‘cut the mustard’ with the voter/eater and includes a Liberally-cut slab of B.C. cheddar cheese, special CC sauce, milder o(u)nions and savours the chance to lead again.

Grilled using clean fuel to avoid toxic emissions, this Grade A burger offers a non-meat alternative and/or lettuce wrap and hopes to ‘mustard’ up some excitement with its new leadership to appeal to our environmentally-conscious customer. This burger includes a slice of organic Cowichan Valley green tomato and green lettuce and has come a long way to ‘ketchup’ in the political kitchen of popularity. Also it strives to be ‘Furst’-enau in the political race appealing to the selective taste of the B.C. voter/eater.

Made in B.C., this Grade A burger that’s frying on the front-right burner is steaming up the political kitchen and boasts a conservative dollop of special ‘Bolin’aise dressing, an equally conservative slab of tangy blue cheese, slice of aromatic onion and is a culinary choice among selective voters/eaters.

Still haven’t decided who you’ll be voting for or planning to vote for another party? Not to worry; you can vote for the (b)undecided/other burger. 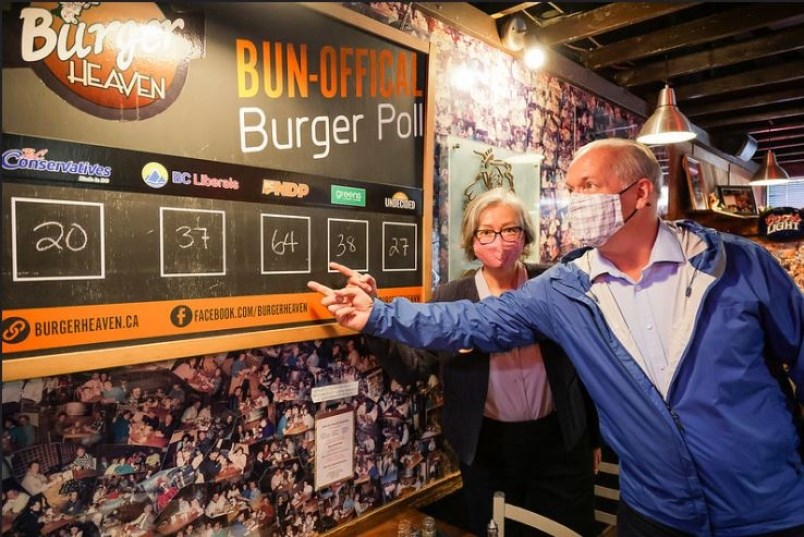 And if you really want mango habanero sauce on your burger, but you’re not voting NDP or you love blue cheese and aren’t a Conservative, that’s not a problem either.

As of Oct. 20, the John Horgan Burger is headed towards a landslide win, with the other three evenly-paced as they jockey for second, third, and fourth places.

With additional reporting by Vancouver Is Awesome

Milestones, the restaurant chain that started in Vancouver, is getting new ownership
Jun 14, 2021 9:18 AM