The Cambie has been saved: Vancouver's oldest bar isn't closing after all

Operators The Cambie Malones Group announced Wednesday that The Cambie "has been saved" and the venue will "no longer be closing its operations this year."
Oct 9, 2019 3:23 PM By: Lindsay William-Ross 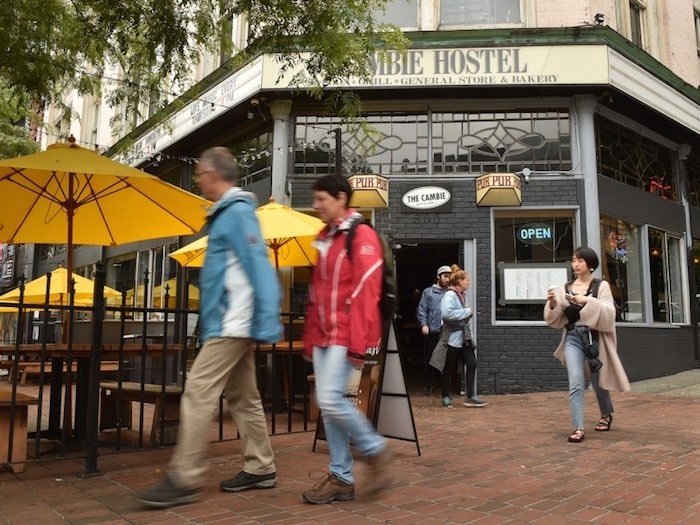 Before backpackers, bike couriers and the grunge crowd took over, the Cambie was a notorious dive-bar that attracted the down and out as well as the vanguard of Vancouver’s indie music scene. Photo by Dan Toulgoet/Vancouver Courier

There were plenty of tears shed in beers in recent months over the news that the city's storied watering hole, The Cambie, was doomed to close down.

A contentious divorce led to the necessary sale of the property by ex-owner Sam Yehia, and the venue seemed poised to end its tenure as Vancouver's oldest bar come Nov. 30.

However, operators The Cambie Malones Group announced Wednesday that The Cambie "has been saved" and the venue will "no longer be closing its operations this year."

In a media release, The Cambie Malones Group explains that their staff and management have spent the last few months working towards a solution for keeping the pub open. The operators have successfully reached an agreement with the new property owners which will permit them to keep running the business at the location "for the foreseeable future without any anticipated interruptions or changes to service on the horizon."

“We really didn’t think it would be possible to keep the business alive after the property was sold,” says Sally Negus, owner of The Cambie Malone’s group, “but we are so happy to announce that we did it! It was never my choice or wish to close The Cambie, so we did everything we could to keep it going.”

As a bonus, the Cambie hostel, currently operating on the upper floors of the building, will continue to run, while its sibling property and pub in Nanaimo will change ownership and stay open under the same name at the end of this month.

According to Yehia, a bar has been in operation on that corner at 310 Cambie St. since 1897. That 122-year stretch makes The Cambie the oldest watering hole in Vancouver. Many would say, with great fondness, the key word in that last sentence is “hole.” Over the years, the bar has gone through many makeovers before it became known as the world-famous backpackers hostel it is now, eulogized V.I.A. columnist Grant Lawrence back in July.

Now, the stories at the iconic dive can continue to pour forth along with the pints of beer, and the place may resume its post as being a "rite of passage" for many a young Vancouverite.

The Cambie is located at 310 Cambie Street in Vancouver.