Take yourself on a Comox Valley beer escape

What sets the Comox Valley apart as a vacation destination in B.C. is its wealth of quality food and drink options - especially if you love craft beer.
Rob Mangelsdorf Dec 23, 2019 3:59 PM

British Columbia is a many splendoured place—that’s why we live here after all! We’re spoiled with snowcapped mountains, beautiful beaches, verdant forests, crystal-clear lakes and rivers, bountiful oceans, amazing food and drink, warm summers and mild winters. Yeah, it rains a bit, but that’s what the Gore-Tex is for.
In some lucky corners of the province—like the pocket of paradise that is the Comox Valley—you can even experience it all within a 30-minute drive. Kayaking, snowboarding and mountain biking, all in the same day, if you’re so inclined. But what truly sets the Comox Valley apart as a vacation destination is the wealth of quality food and drink options.

Three distinct communities make up the Comox Valley—Comox, Courtenay and Cumberland—each with their own personality and offerings. The valley’s shared agricultural history has given rise to a healthy local food culture. Eating and drinking local is a way of life here—whether its wine from local wineries like 40 Knots or Beaufort, award-winning cheeses from local dairies like Natural Pastures, fresh produce from the many roadside farm stalls like Sieffert’s Farm Market, or beer from any of the many local craft breweries.

Speaking of beer, the past year has seen three new craft breweries open in the Comox Valley, along with new craft beer-focused taprooms and restaurants, creating a craft beer mecca almost overnight. It’s just another reason to put this part of Vancouver Island on the top of your B.C. craft beer road trip list. 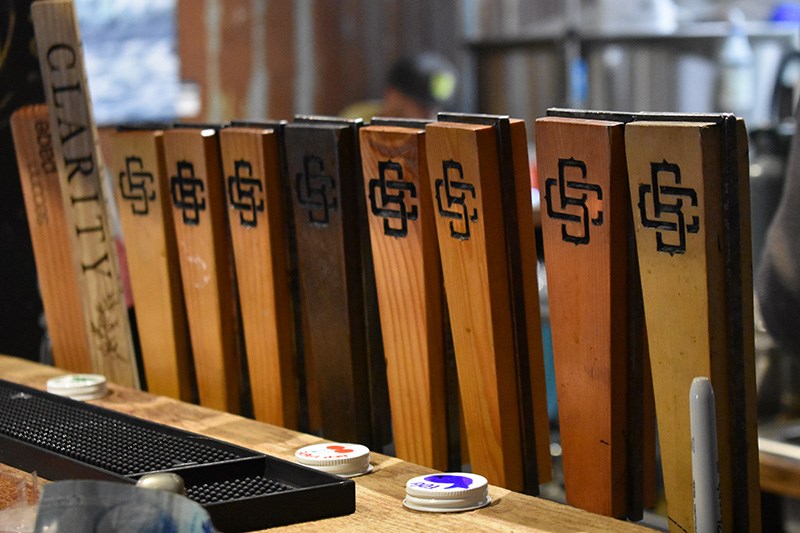 Cumberland Brewing Co. has helped revitalize the once sleepy village it calls home. Photo by Rob Mangelsdorf
Once a threadbare mining town with more boarded up shops than open businesses along its main stretch, Cumberland has seen a remarkable resurgence in the past 30 years. Lured by cheap housing prices and a stunning location nestled next to the Comox Lake and the Beaufort Mountains, newcomers to this long neglected corner of the valley have transformed it into an oasis of awesomeness.

The brick buildings have been lovingly restored, as have many of the historic wooden Victorian homes that line the town’s quaint, quiet streets. Where there were once empty storefronts there are now taco shops, artisan ice creameries and handmade local clothing stores.

With Mount Washington Alpine Resort just 30 minutes away, and more than 80 km of single track mountain bike trails within the city limits, Cumberland has become a destination in its own right—making it the perfect place to start your Comox Valley journey.

Your first stop in Cumberland should naturally be the Cumberland Brewing Co. and its spacious heated patio. Recent renovations have added seating space both inside and out, and have allowed the brewery to add a full kitchen.

Physical exertion demands sustenance, so listen to your body and walk it across the street to Rider’s Pizza, a must-visit après stop for a massive, well-earned pizza. As great as the pizza is, the beer list is just as, if not more impressive, with close to 15 taps of local craft beer—including everything from CBC (same owners)—with tasting flights available, as well. 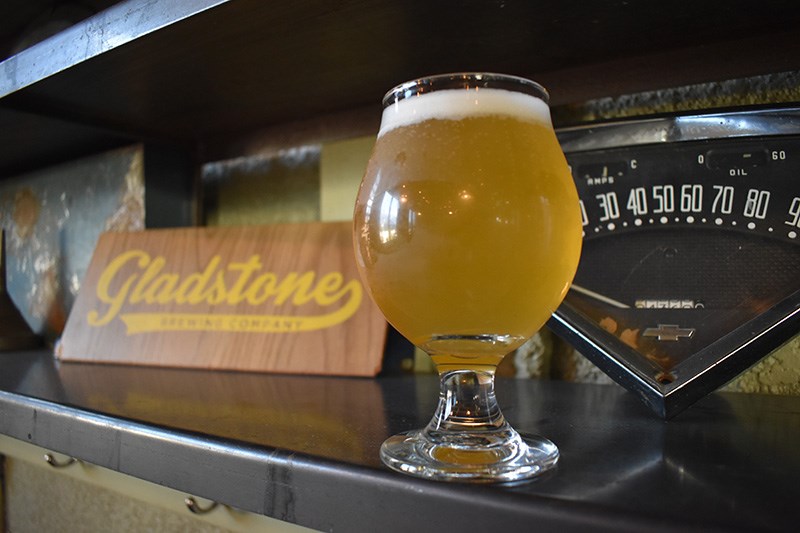 Gladstone Brewing in Courtenay is an ideal place to fill your tank with delicious craft beer. Photo by Rob Mangelsdorf

The Comox Valley’s heart, both geographically and demographically, Courtenay is home to close to half of the valley’s residents. Located along the Courtenay River estuary—a popular kayaking destination—the cute-as-a-button downtown area of Fifth Street has also seen significant rejuvenation in recent years, with an increasing number of restaurants and bars opening up. One of the catalysts has been Gladstone Brewing, just around the corner on Fourth Street. The brewery opened up in an old mechanic shop in 2015 and leaned into the vintage automotive theme, with antique oilcans, tools and hubcaps adorning the bright and airy tasting room. When the sun’s out—regardless of the season—Gladstone’s massive covered and heated patio comes alive. Grab a pint of Gladstone’s refreshing Belgian Single and tuck into one of the delicious gourmet burgers.

A short bike ride down the waterfront Courtenay Riverway trail brings you to the Comox Valley’s newest brewery, Ace Brewing Co. This aviation-themed brewery is right next to the Courtenay Airpark and pays homage to the area’s military history with beers like Spitfire Lager and Drop Tank India Blonde Ale. Brussels-born brewer Louis Hage is bringing some of his Belgian flair to the beer list with beers like Fruit Bomb, a raspberry mango sour that explodes with fruit flavour while finishing tart and dry. 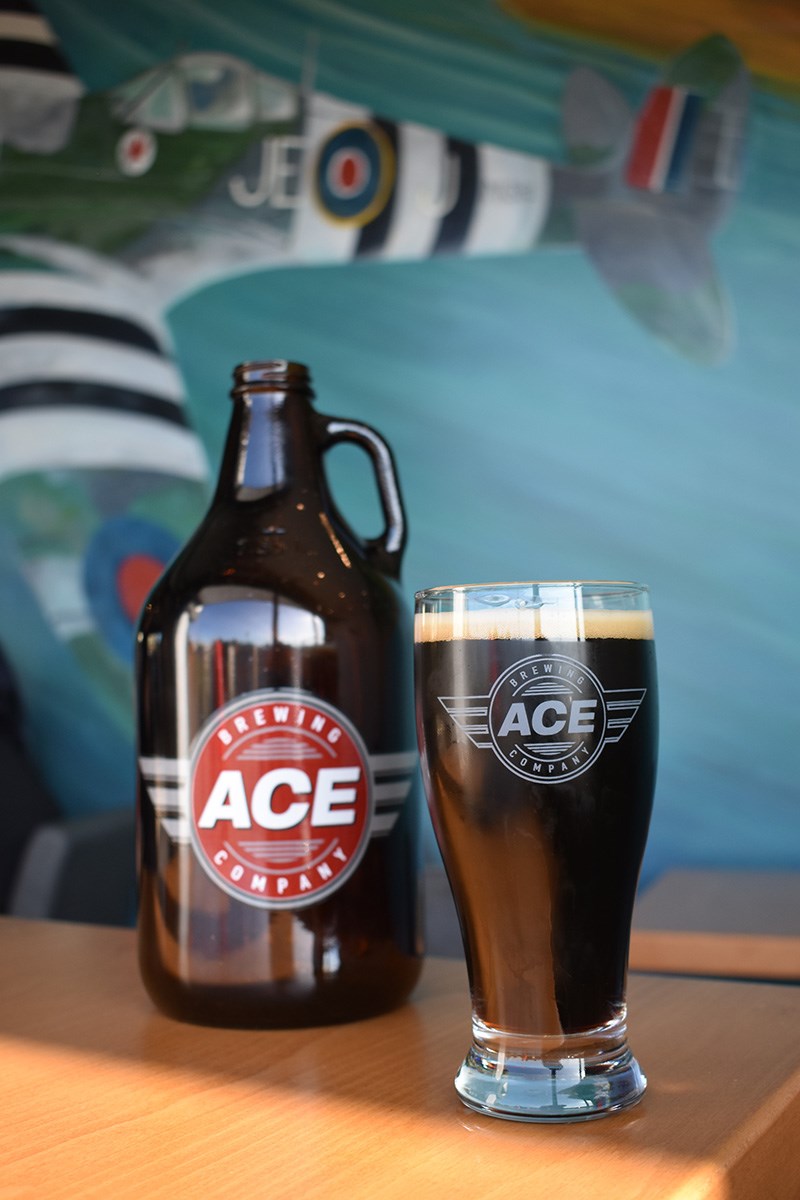 Back on Fifth Street, there are plenty of food and drink options, including the Cornerstone Café, which features 20 taps of local craft beer, live music and even poetry slams. Just a few shops up the street, Nikkei Ramen-Ya has the best ramen on Vancouver Island, and an extensive sake list to pair it with.
For a truly unique craft beer experience, make sure to pay a visit to the White Whale on the opposite side of the Courtenay River. This faux-Tudor style pub sits right on a tidal slough with its own dock, making it an ideal spot to pull up your kayak or stand-up paddleboard and have a pint. A patio seat is a must, providing a front row seat for the action on the river, where bald eagles and chubby harbour seals sun themselves on the dock. With 16 rotating craft beer taps, there’s always something fresh being tapped.

For the longest time Comox was home to only two demographic groups: Canadian Air Force personnel from nearby CFB Comox, and octogenarian retirees. As a result, for many years downtown Comox has had a well-earned reputation as being the sleepy backwater of the three valley burghs.

That, however, has recently changed: the past year has seen two new craft breweries open up, as well the craft beer focused Church Street Taphouse. And the demographics are changing.

“Comox was a sleepy town for a lot of years, but now it’s a destination,” says Church Street’s head bartender Brian Chapman. “A lot of people are moving up from Victoria and Vancouver. A lot of people who left the valley when they graduated high school are now coming back to start families. And they like craft beer.”

The tap list at Church Street features a wide array of B.C. brewers, with an emphasis on IPAs and craft lagers.

“We try and offer the broadest spectrum possible so that no matter who walks in the door, we’ll have something for them,” he says. “We still get Lucky drinkers coming in here, and we don’t want them to feel alienated. But I always make sure we have one tap that’s just for the hardcore beer geeks.”

On the day I visit, that tap is pouring Boneyard Beer’s Suge Knite imperial stout, clocking in at a smooth 14.0% ABV. This hardcore beer geek was mightily impressed. 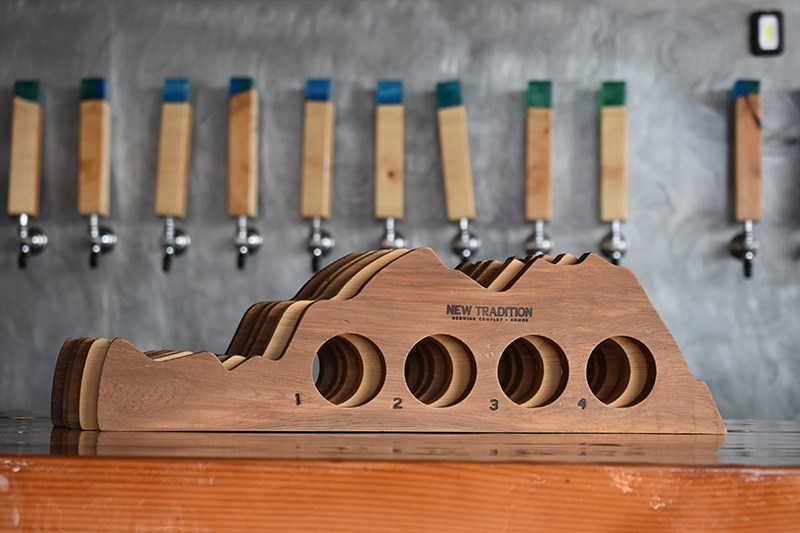 Everything at New Tradition Brewing is handmade in-house, from the beers to the chairs, to the beer paddles. Photo by Rob Mangelsdorf

One block east at the Comox Centre Mall, New Tradition Brewing opened earlier this summer and brewer Pat Savard has been winning over locals with his approachable, accomplished brews. The tasting room itself is bright and welcoming, with rustic handmade touches throughout the space. In fact, everything in the brewery was hand built by the couple, from the bar, to the tables, to the chairs. For lager-lovers, Cure For The Common Kölsch is Savard’s take on the traditional lagered ale of his mother’s hometown of Cologne, Germany. However, the deeper you delve into New Tradition’s beer list, the more surprises you’ll find. Like the Juice Caboose Wild Session Ale: this fruity, funky little number utilizes multiple strains of wild yeast for plenty of flavour despite the modest 3.0% ABV.

Land & Sea Brewing Co. on Guthrie Road has quickly become one of Comox’s favourite meeting places, thanks to a winning combination of great beer, great food and a great atmosphere. Brewer Tessa Gabiniewicz’s beer list emphasizes approachable, sessionable styles, perfect for hours of casual hangs in the hip tasting room. The Comexico Pale Ale is a great choice for when the brewery throws open its big bay doors and lets that Comox Valley sunshine stream in. Fruit-forward and hazy, with just enough hop bitterness to dry out the finish, it’s a West Coast twist on a classic East Coast pale ale. Grab a growler to-go for your Comox Valley adventures, whether it's snowshoeing, skiing, windsurfing or just curling up with a blanket next to a beach fire at Goose Spit.