Sipping your way through Canada's Steeltown: Why Hamilton, Ontario might be the best-kept secret in craft beer.
0
Oct 11, 2019 2:18 PM By: Rob Mangelsdorf

This story originally appeared in the Fall 2019 issue of The Growler, out now! You can find B.C.’s favourite craft beer guide at your local brewery, select private liquor stores, and on newsstands across the province. 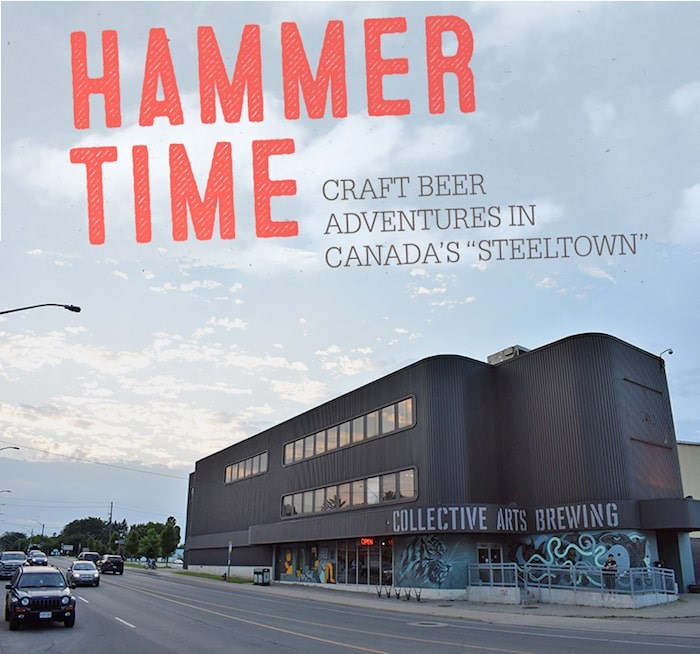 Perhaps understandably, Hamilton isn’t on most people’s lists of Canadian tourist destinations. Plagued by outdated images of its former industrial self, who could blame someone for not being interested in a city who’s name tends to conjure images of steel plants belching black smoke, boarded up houses and crippling unemployment?

But that was the Hamilton of the past. The smog is gone (down 90 per cent since the 1970s), the economy is booming and the population has climbed by close to 200,000 people in the past 15 years, many of them fleeing unaffordable Toronto and bringing their big city tastes with them.

Most importantly, between Collective Arts’ attempts at global craft beer domination and Clifford Brewing being named Canada’s Brewery of the Year for 2019, some of the best beer in Canada is coming out of Hamilton right now. Craft beer needs it needs two things to thrive: cheap industrial land on which to put breweries; and a population sophisticated enough to appreciate the beer. Hamilton scores on both counts.

So during a recent trip to Toronto, I decided to spend a day in Steeltown to see what’s brewing. As it turns out, it might be the best-kept secret in craft beer.

Closer than you think

I enlisted the help of my trusty beer-loving buddy Nelson for this adventure, and the two of us, sunburnt and soggy in the sweltering humid heat, made our way down the Lake Ontario shoreline on one of Toronto’s incredibly comfortable and blessedly air-conditioned GoTrains. Within an hour and 15 minutes of leaving Toronto’s Union Station we were on the campus of McMaster University in Hamilton.

Despite a metro population of more than 750,000, Hamilton is home to only six craft breweries and they are spread all over the city. Since drinking and driving is for assholes, and Uber—while convenient—tends to get expensive, we decided to get around using the city’s bike share program, SoBi.

We set out from McMaster on our bikes, past the hilariously named Cootes Paradise nature refuge and into the bedroom community of Dundas for our first stop—Shawn & Ed Brewing Co. The brewery is housed in a historic former curling and skating rink, dating back to the 1860s. The vast brick and timber frame building is spacious and provides a rustic beer hall atmosphere, with its many communal picnic tables. 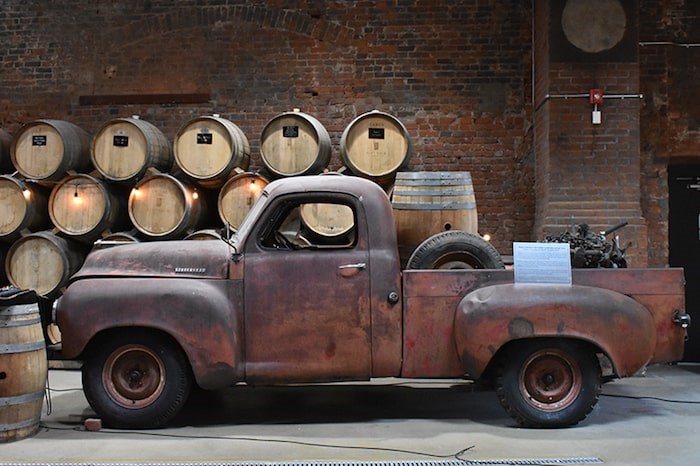 Shawn & Ed Brewing Co. is housed in a historic former curling and skating rink and features one of the original Studebaker pickup trucks that were manufactured in Dundas. Photo by Rob Mangelsdorf

The beer is definitely aimed at converting the Molson Canadian crowd, with close to two thirds of the beer list on our visit being devoted to North American-style lagers. But it was a hot day to be riding bikes, so we weren’t complaining. That being said, Barrelshed (6.5% ABV, 37 IBU) was an absolute standout. This complex barrel-aged amber ale offers notes caramel, dark fruit, biscuit, fig, clove, oak and citrus with a dry, slightly tannic finish. Unsurprisingly, it won a national gold at the 2017 World Beer Awards.

A short but calorie-shredding ride up the Niagara Escarpment brought us to two of Hamilton’s newest and most exciting breweries, Fairweather Brewing Co. and Grain & Grit Beer Co., located just a block apart in an industrial park in the West End. 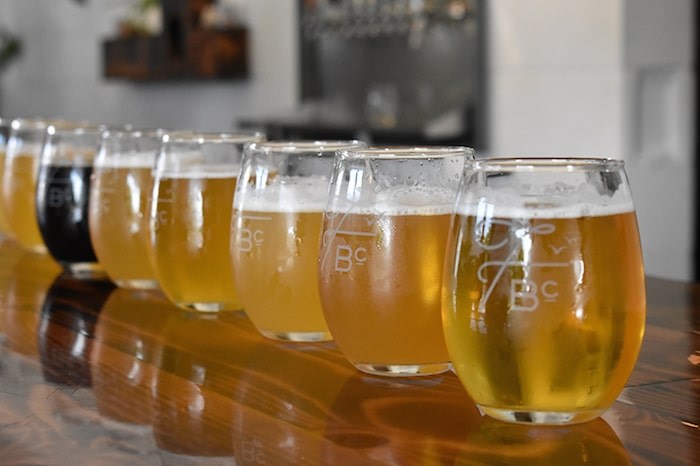 Fairweather opened in 2017 and has quickly developed a loyal following among locals and beer nerds alike. The tasting room has a familiar minimalist vibe with the requisite whitewashed walls, wood accents and leafy green houseplants one expects in 2019. But it’s the exceptionally creative and well-executed beer that sets Fairweather apart. In particular, the Nothing More (7.0% ABV) American-style stout wowed us with rich organic cacao, fresh raspberries and notes of roast barley, coffee and dark fruit. Think Black Forest chocolate cake in beer form.

Down the road at Grain and Grit the vibe was a bit more casual. The brewery is housed in a former muffler shop and the garage doors were wide open and the patio packed on this sunny day—largely with the friendly staff of Toronto’s Left Field Brewing, who, much like us, came down for the day to check out what the Hamilton beer hype is all about. 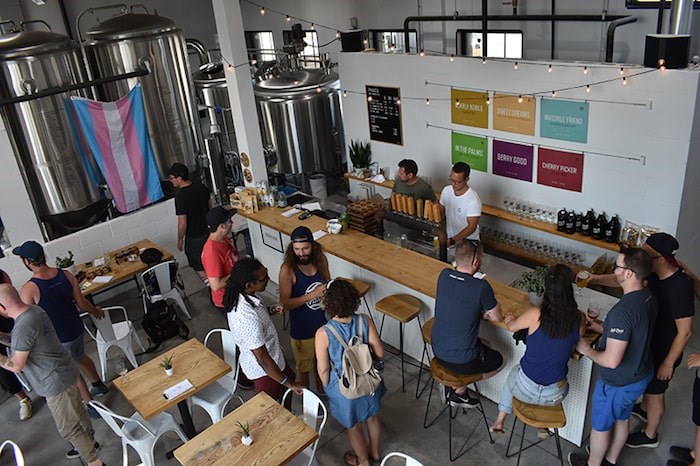 The beers were going down fast now, and the In The Palms (6.0% ABV, 90 IBU) lactose IPA went down so quickly we needed to go back for seconds. The luscious tropical fruit flavours of mango, passion fruit, pineapple and guava seemed appropriate, given the weather, while the assertive hop bitterness, balanced by the addition of lactose, ensured it finished clean. If a beer could taste how a Hawaiian shirt looks, this would be it.

We cruised downhill into Hamilton proper, and through the up-and-coming neighbourhood of Kirkendall. Here, the working class charm that permeates the city was on full display as we rode past newly renovated historic brick homes while mile-long freight trains trundled noisily nearby. Given Hamilton’s blue-collar roots, it’s only natural that craft beer should flourish here. 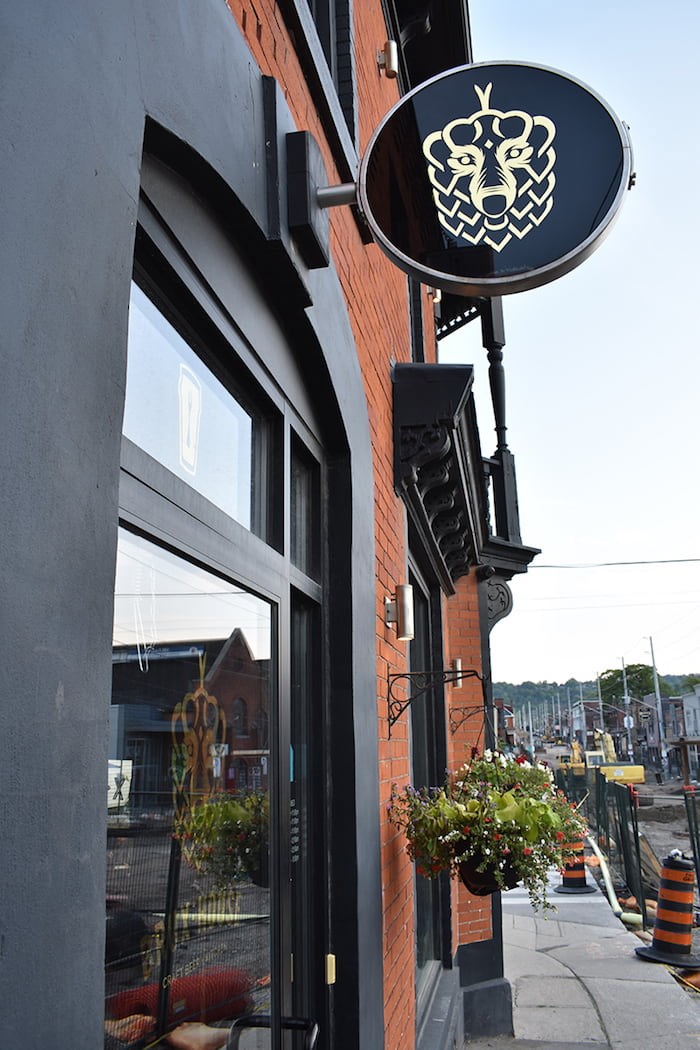 We made a well-advised stop for food (and more beer) at Brux House, a craft beer-focused restaurant on Locke Street in a whimsical two-storey Edwardian heritage house. The oysters with mignonette and octopus salad were both fresh and invigorating, but it was the eponymous Brux Burger that stole the show, cooked medium rare to order with bacon jam and crispy onions on a brioche bun. With 16 rotating craft taps and extensive list of cellared Belgian beers, we were spoiled for choice with beer pairings.

Heading north, we made our way to easily the most well known brewery in Hamilton. By combining killer craft beer with eye-popping labels by some of Canada’s most exciting visual artists, Collective Arts Brewing is quickly becoming a global brand. Having already conquered Canada with beers like Ransack the Universe IPA and Stranger Than Fiction Porter, it has its eyes set on the U.S. market with a second brewery and tasting room set to open in Brooklyn. 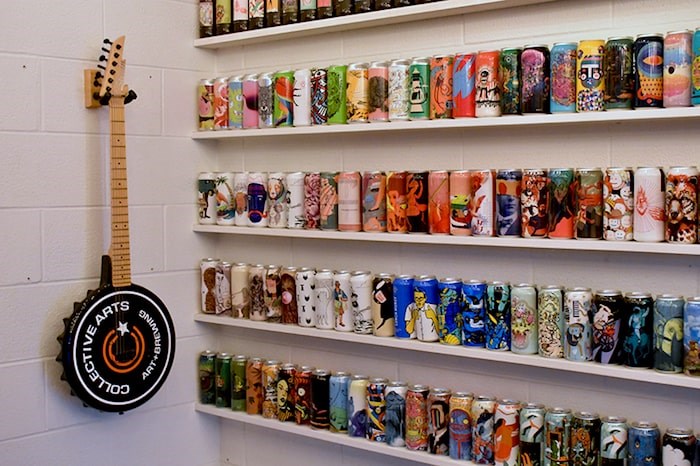 Collective Arts’ can and bottle label gallery showcases the brewery’s creative side. Photo by Rob Mangelsdorf

While the production facility in Hamilton’s North End is absolutely massive, the tasting room is surprisingly modest, with seating for 30 people, tops. That said, the beer list was extensive, with 15 beers pouring the day we visited. We settled in the tasting room’s “gallery,” a small semi-private room displaying Collective Arts’ hundreds upon hundreds of different bottle and can labels on each wall, from floor to ceiling. The Guava Gose (4.9% ABV) was refreshing and light bodied, with tart tropical citrus notes and balanced acidity.

Located on the far east side of town, Clifford Brewing Co. is well outside the SoBi’s operational area—but being the civilized city that it is, an Uber is only a minute away in Hamilton.

The brewery, which won Brewery of the Year honours at the 2019 Canadian Brewing Awards, began life as a contract brewery before laying down permanent roots in a massive 10,000 sq. ft. warehouse in the city’s heavy industrial district. The cavernous tasting room sports foosball tables, air hockey and tabletop arcade games, in addition to hosting live music weekly.

Clifford’s somewhat traditional beer lineup is all brewed very much according to style, but it is nailing those styles, so it’s little wonder it wins as many awards as it does. The Bourbon Barrel-Aged Porter (8.5% ABV) was an absolute home run of a beer with velvety richness and notes of chococlate, vanilla, coffee, oak and whisky.

Back downtown, we finished up the night at Merit Brewing, a sleek and modern beer hall popular with Hamilton’s recently arrived Toronto expats. About as different an experience as you could imagine from Clifford Brewing, everything at Merit was immaculately put together, with long communal tables and a menu focusing heavily on the delicious housemade sausage. Waves & Waves & Waves (4.5% ABV), a collab with Swedish brewery Dugges Bryggeri, was a titillating raspberry, blackberry vanilla sour with notes of Swedish fish candies, outdoor pools and youthful indiscretion.

And so as the clock approached midnight—with our heads swimming from the 50-plus different beers we sampled and our legs aching from cycling close to 20 km—we hurried to the Hamilton GO Centre six blocks away to catch the last train of the day back to Toronto. A mere 12 hours after we had arrived, we were gone, having been thoroughly charmed by this city of steel.

The Fall 2019 issue of The Growler is out now! You can find B.C.’s favourite craft beer guide at your local brewery, select private liquor stores, and on newsstands across the province.