Fears of the COVID-19 coronavirus outbreak have kept the city’s Chinese-speaking community away from public spaces.
0
Feb 20, 2020 11:06 AM By: Business In Vancouver 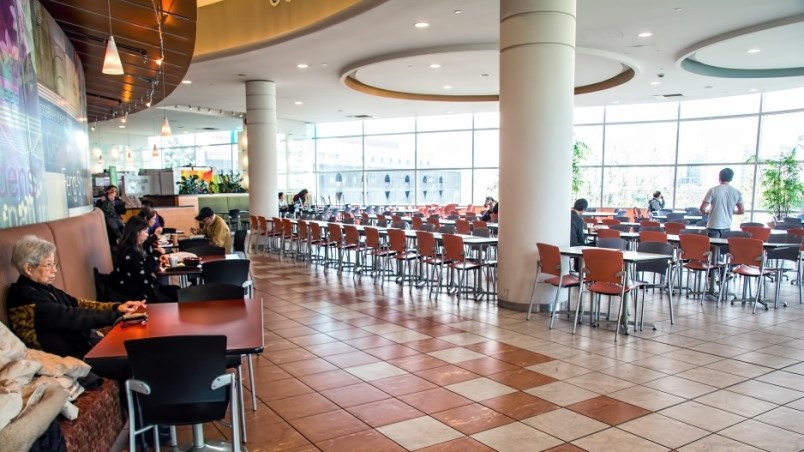 The food court at Aberdeen Centre. Photo via Business in Vancouver

Matthew Murtagh-Wu and his family regularly dine out at Shoom, a Chinese restaurant on the corner of East 49th Avenue and Fraser Street in Vancouver that is usually bustling with customers.

In early February, the Vancouver food personality revisited Shoom for dinner and immediately noticed something was amiss.

“It was quiet — and we all know why that is,” said Murtagh-Wu, owner and chef of Chinatown-based frozen gourmet dumpling business the Dumpling King. “The owner came over because she always checks up on us, and we asked her how she’s doing... She said she can count on one hand the number of tables they’ve served on that day.”

The story is the same in Chinese restaurants, cafés and other food services outlets throughout Metro Vancouver. Fears of the COVID-19 coronavirus outbreak, which had killed 1,113 people and sickened more than 44,000 as of last week, have kept the city’s Chinese-speaking community away from public spaces.

“Dim sum is a way of life for people from Hong Kong and Guangdong province in the south, so people wouldn’t change their habits easily. But a lot of them have friends from the rest of China urging them not to go out, and so now everyone is scared of being infected.”

Fear is widespread even though there have been only four confirmed cases of coronavirus in B.C., and only two deaths — one in Hong Kong and another in the Philippines – have been reported outside China proper. Almost all of the deaths have been concentrated in the outbreak epicentre of Hubei province and its capital city of Wuhan.

But restaurants that depend heavily on Chinese clientele have reported the capacity being used by diners as low as 10 per cent since the outbreak was first reported in January.

Tse said restaurants are doing everything they can to encourage diners to visit, such as pressing member restaurants to practise optimal sanitation procedures and screening patrons for possible exposure to the virus. Tse said that at least three restaurants have suspended operations, while others are cutting staff to stay ahead of the fixed costs.

Tse noted that a prolonged slump in Chinese restaurant business may also endanger suppliers to these restaurants, potentially threatening the jobs of as many as 1,000 people if the situation does not improve.

Andy Lin, chief representative of two MeetRice Noodles restaurants in Metro Vancouver, said he and others are seeing a lot of slow nights. “I think the coronavirus outbreak could be called our ‘black swan event’ for the entire global Chinese culinary industry.”

Lin added that MeetRice Noodles’ more than 800 locations in China have also suffered from plummeting patronage because of the virus. He said he doesn’t foresee the industry recovering until at least the summer months, and the Metro Vancouver market will see “an overhaul” of players — but the ones who remain will be “stronger than ever and highly adaptable to market changes.”

In the meantime, the biggest saving grace may be co-operative efforts with online delivery platforms like DoorDash and Chinese-language Fantuan, which minimize customers’ contact with others.

However, the precipitous drop in the urge to dine out among Chinese-Canadians does not appear to have spread to other communities. Ian Tostenson, president and CEO of the BC Restaurant and Food Services Association, said its member restaurants are still reporting revenue growth, although specific numbers are not yet available.

“It’s good,” Tostenson said. “It’s not fabulous, but there is growth.… We were prepared for [coronavirus], but we never had to do anything. We’ve had no phone calls. We’ve had no concerns about what could happen. It has really been a non-event — certainly, in the Asian food services community, things are much more different there because they are more directly impacted.”

Murtagh-Wu reported the same, because his business model does not have a traditional dine-out component and his clientele does not skew heavily toward the Chinese-Canadian community. But the food sector entrepreneur is worried about what a prolonged period of struggle may do to Vancouver’s unique culinary culture.

“I think we’re not giving them enough credit,” he said when asked if he thinks a large number of Chinese restaurants will cease operations in Vancouver. “These are tough mom-and-pop shops that hustle. But we don’t want to put them to the test if they don’t have to be.”

Tse said his organization is now worried about an even longer- lasting impact. Vancouver was set to host a world Chinese culinary competition later this year, and questions have already been raised over whether it will be postponed or cancelled. If the competition is lost, Tse fears it may never return to Vancouver — hurting the industry’s visibility and reputation worldwide.

“We are on WeChat and other social media platforms, sending out messages encouraging family members to come out to dine,” he said. “But what can we do if no one wants to come out to eat?”