Like beer and seafood? Well, this beer is made from Dungeness crab

Photo: The Growler Upon first glance at a bottle of Twin Sails Brewing and Quebec’s Brasserie Dunham’s recent collaboration, Biére de Crabe, you might naturally ask yourself, “Is this beer really made with crab? Crab beer? Is that a thing now?” First
Jan 18, 2018 1:31 PM By: Rob Mangelsdorf 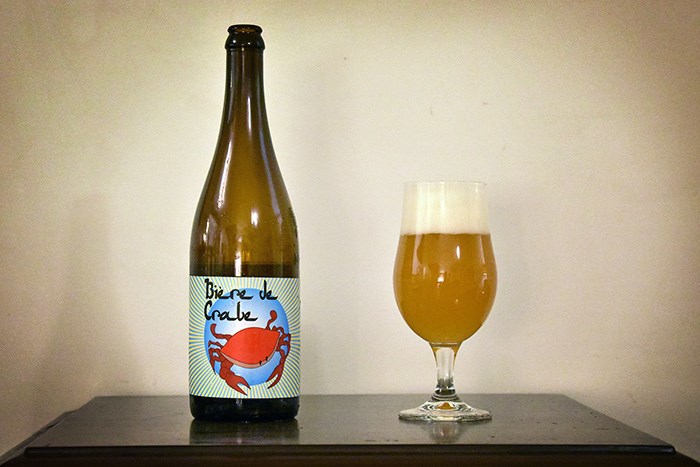 Upon first glance at a bottle of Twin Sails Brewing and Quebec’s Brasserie Dunham’s recent collaboration, Biére de Crabe, you might naturally ask yourself, “Is this beer really made with crab? Crab beer? Is that a thing now?”

First thing’s first: Yes, this beer is made with Dungeness crab shells. 50 friggin’ pounds of them, in fact. So if you have a shellfish allergy, avoid this beer like the plague.

Now, if you’re wondering what would possess someone to add seafood to a perfectly good beer, well, there’s actually quite a bit of precedent. Oyster stouts have a long history in the UK, where brewers would add whole oysters, or often just the shells, to impart a briny flavour and to clarify the beer. Isinglass, a kind of gelatin obtained from fish, is also commonly used as a clarifying agent in beer.

So there’s method to the madness here, which is immediately apparent when you try the beer. It’s pretty damn delicious, which should come as no surprise given the breweries involved.

Style-wise, Biére de Crabe falls somewhere between a biére de garde and a saison, with a round, soft, coating mouthfeel and plenty of tart fruit and spice. What it doesn’t have, mercifully, is a lot of crab flavour. I’m a born and bred West Coaster, so I love my Dungeness, but it’s not a flavour I necessarily want front-and-centre in my beer. But by using just the shells, the beer is delightfully briny, and is further complemented by the addition of lemon peel.

So, yeah, crab beer. Some ideas are just crazy enough to work.