Vancouver's sassiest diner has closed its doors for good

The last cheeky remark and plate of "Big Ass Pancakes" were handed out Tuesday at Vancouver's storied Elbow Room. The long-running diner known for its trademark cheeky service closed their doors for good on October 30 in the face of redevelopment.
0
Oct 31, 2018 7:10 AM By: Lindsay William-Ross

The last cheeky remark and plate of "Big Ass Pancakes" were handed out Tuesday at Vancouver's storied Elbow Room. The long-running diner known for its trademark cheeky service closed their doors for good on October 30 in the face of redevelopment. 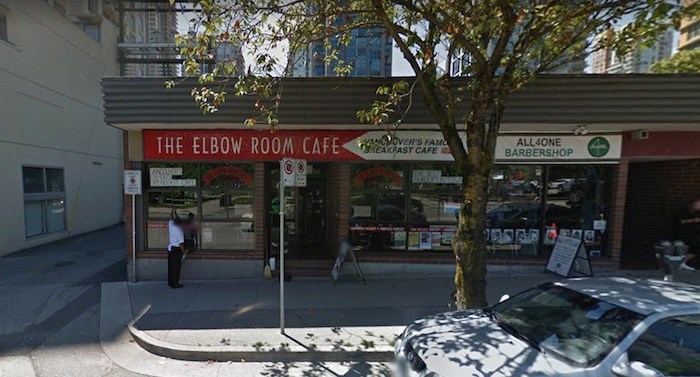 The Elbow Room began its life in 1983 on Jervis, and moved to its Davie Street spot in 1996. The Davie at Seymour site is one of several the City of Vancouver intends to redevelop for housing.

Other retailers on the affected block of Davie at Seymour include Royal Vape and All 4 One Barbershop; restaurants Juno Vancouver Sushi Bistro and the What’s Shaken Milkshake spot have already closed.

While the plans for this particular redevelopment include a mix of retail and residential, it’s unclear if the Elbow Room will be one of the new tenants in the rebuild, or if they intend to open elsewhere–this may well be the end of the line for the quirky eatery.

The Elbow Room is known for their heaping plates of diner-style eats, served with a generous helping of sass: “Food and service is our name, but ABUSE is our game.”

Opened over three decades ago by Bryan Searle and his husband Patrice Savoie, the couple created a safe space in the community (despite the expected cheekiness they dished up with their bacon, eggs, and coffee). The restaurant was a special place for many in and allied with Vancouver's LGBTQ community.

The Elbow Room was also known for their partnership with the charitable organization A Loving Spoonful, which provides meals for Vancouverites battling HIV/AIDS. Customers would be asked to make a donation if they were unable to finish their generous portion of food served at the restaurant.

Fans of The Elbow Room are invited to head to the restaurant on October 31 for a celebration planned for 5 to 9 pm.

With files from Sandra Thomas/Vancouver Courier