I've been working downtown for wow....half my life. I've come along way from that first day I stepped foot into Bentall one, my cubicle is now next to a window, and more importantly I now have vast knowledge of downtown food fairs.
Jul 24, 2009 11:19 PM By: Jef Choy

I've been working downtown for wow....half my life.  I've come along way from that first day I stepped foot into Bentall one, my cubicle is now next to a window, and more importantly I now have vast knowledge of downtown food fairs.

I have a longtime love a fair with food fairs, the choices, the speediness, the price.  I'm all for great service, and Vancouver's full of it....but some days....I'd rather just give 'em my money and get it myself.....

A few years ago I realized that I needed to give back, I was no longer 'the young guy' anymore but I had a wealth of information that I needed to share with the next generation of office workers.  To do this, I created 'Food Fair Friday', taking my green cohorts to a new one each week.

Of course the kids all went on to bigger and better things, and I now realize how much I miss Food Fair Fridays, so I've decided to start them up again, sharing them with YOU!.  Today an ex colleague and friend of mine checked out H-Mart on Seymour and Robson. 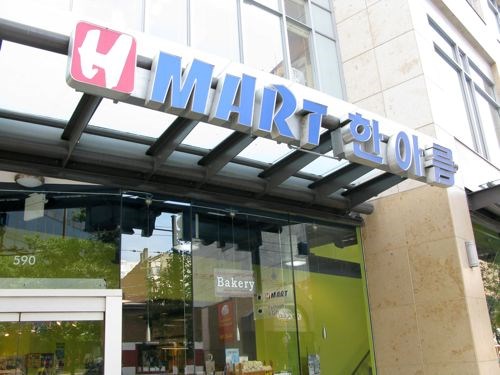 For those of you who have never been to H-Mart, it's a Korean supermarket.  They not only import goods from Korea, but also some stuff from Japan, I stop there often to stock up on Pokari Sweat.

The food fair is quite small, they have two or three Korean stalls as well as a Japanese booth. Looking around, it didn't take me long to decide what I wanted...bibimbap!  I chose this not only because I really like it, but also....it was a test.  If it comes in a stone bowl, two thumbs way up....if not....meh....I know..it's a food fair...they charge an extra two bucks at Jang Mo Jib....I'm asking for a stone bowl at a food fair? Crazy talk right? 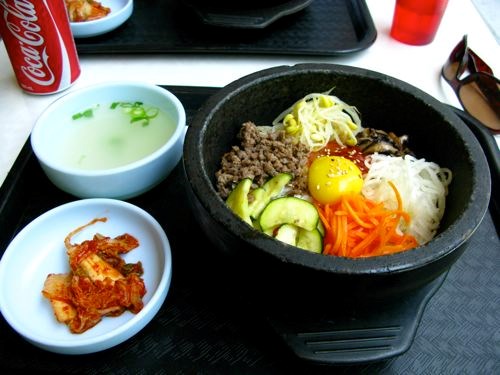 Now with the stone bowl comes responsibility, which we didn't realize.  You can't just leave it on the table when you're done, and well...we got yelled at....twice.  Frankly we're still a bit confused what the appropriate protocol is, but I think after we go back a few more times, we'll get it down.