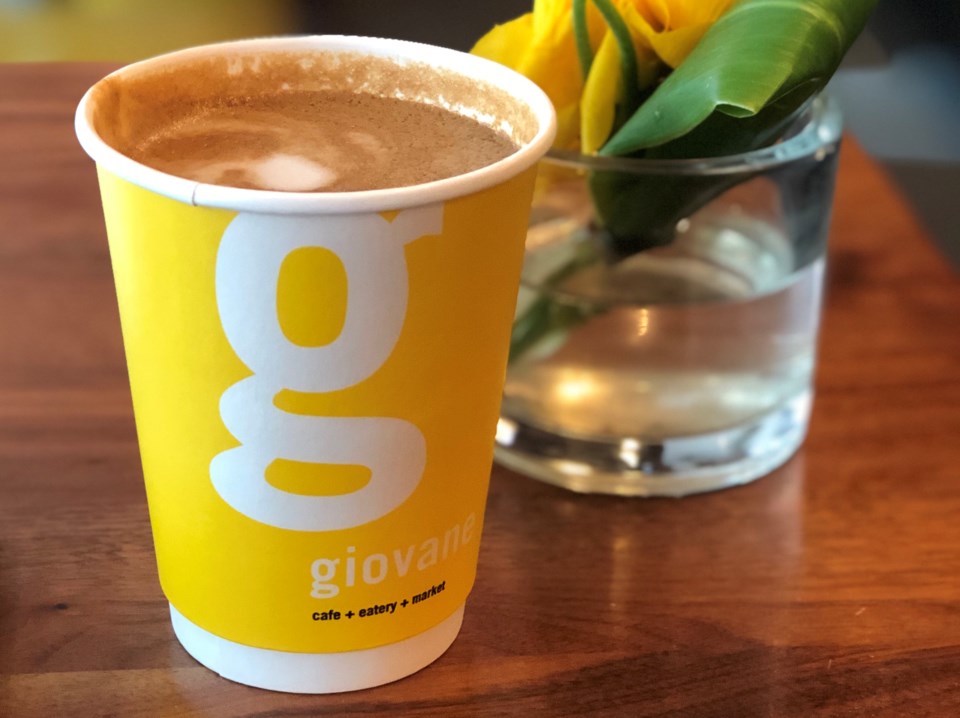 Banana Coconut Latte at Giovane at the Fairmont Pacific Rim. Photo by Lindsay William-Ross/Vancouver Is Awesome

One of Vancouver's premier restaurant groups, Kitchen Table, will soon be in charge of Giovane Café, the casual counter-serve coffee shop and marketplace at the base of downtown's Fairmont Pacific Rim.

The Fairmont announced the change of management Tuesday in a media release, indicating that Giované will close down after a.m. service on Monday, August 3, with Kitchen Table taking the reins as of the following day.

However, the space will remain closed until mid-August, before Giované will re-open as the newest Kitchen Table property.

If the name "Kitchen Table Group" isn't familiar, then the names of their restaurants will certainly be. Kitchen Table operates several top-rated and award-winning spots, including Ask For Luigi, Di Beppe, and Pourhouse, along with Pizzeria Farina and its North Shore sibling, Farina a Legna. Additionally, they have the pop-up pasta-centric Pastificio di Luigi. The restaurants' menus are overseen by Kitchen Table Executive Chef Alessandro Vianello.

Currently Giovane serves a full coffee program (including a Banana Coconut Latte made Instagram famous by Jillian Harris), as well as breakfast fare and casual eats like pizzas and salads. They're also home to one of Vancouver's best sweet treats, the cream-filled Sugar Buns.

While plans for changes to the Giovane space and menu are forthcoming from Kitchen Table, Fairmont Pacific Rim is reminding locals and visitors that their property offers The Lobby Lounge and RawBar, as well as the Patio Pop-Up for food and drink. Hotel guests can also order in-room dining. Botanist, however, remains temporarily closed for the time being.

"The entire team at Fairmont Pacific Rim would like to sincerely thank the community for their continued patronage of giovane cafe + eatery + market over the past 10 years of operation, and looks forward to working alongside the award-winning Kitchen Table Group to provide another elevated offering to the food and beverage venues available at the hotel," says the hotel in their media release.

Feel City BBQ: New spot for northern Chinese charcoal-grilled skewers and lamb dishes opening in Vancouver
Oct 28, 2020 2:05 PM
Comments
We welcome your feedback and encourage you to share your thoughts. We ask that you be respectful of others and their points of view, refrain from personal attacks and stay on topic. To learn about our commenting policies and how we moderate, please read our Community Guidelines.