The Asian-focused chains ups the ante for Canadian grocers increasingly looking to the "grocerant" trend to get shoppers to linger longer and spend more.
The Canadian Press Aug 23, 2018 4:01 PM

Cooks at T&T Supermarket's first seafood bar in Richmond stand ready to prepare spot prawns, clams and lobsters freshly ordered by grocery shoppers, as the Asian-focused chains ups the ante for Canadian grocers increasingly looking to the "grocerant" trend to get shoppers to linger longer and spend more. 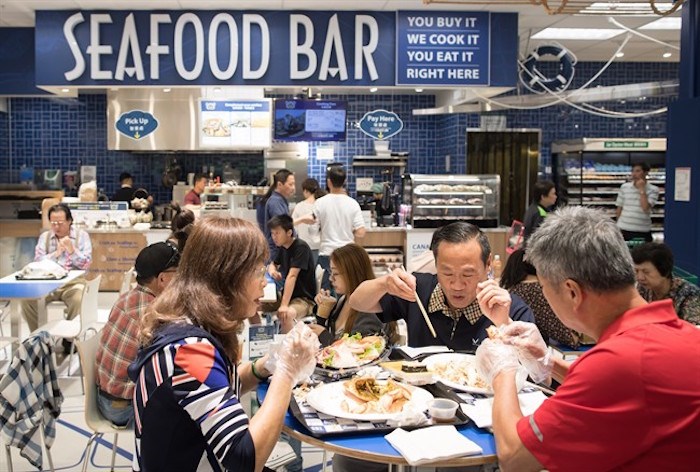 People eat at a seafood bar at T&T Supermarket’s newest location, in Richmond, B.C., on Tuesday August 21, 2018. Shoppers can purchase fresh seafood in the store and have it steamed or baked to be eaten on site. Grocery stores increasingly blur the line between supermarkets and restaurants with large chains adding take-out meals to their shelves, hot food counters where chefs make dishes to order and even full-service restaurants. Dubbed grocerants, these combination spaces serve a time-strapped population that values convenience. THE CANADIAN PRESS/Darryl Dyck

At a time of intense competition in the grocery business, chains increasingly blur the line between supermarkets and restaurants, adding take-out meals to their shelves, hot food counters where chefs make dishes to order and even full-service restaurants.

Diners at the new T&T destination receive a pair of gloves to eat — no cutlery — and sit in the seafood department, surrounded by creatures in live tanks and buckets containing orders zipping overhead.

They appear to be eating it up. There's been a roughly 60-minute wait for seating since the supermarket opened last week.

"It's a restaurant-quality experience at supermarket prices," said Tina Lee, CEO of T&T, which is owned by Loblaw Companies Ltd.

Known to industry insiders as "grocerants," such combination spaces serve a time-strapped population that values convenience at a time when grocers are feeling growing pressure from online competitors.

Loblaw is joining many rivals in the race to woo customers with innovative in-person experiences.

Supermarkets seem to be taking a page out of playbooks from shopping malls, which are facing similar pressures from consumers driven toward the convenience of e-commerce, and are working to attract customers inside with real world luxuries. Malls are dedicating more space to food services and anchor tenants, like Nordstrom and Saks Fifth Avenue, carve out space for restaurants, cafes and food halls — a fancier take on the food court concept.

Grocerants generated 2.35 billion visits in the U.S. over the past year ending June 2018, according to data from market-research firm NPD Group — down two per cent from the same period a year ago due in part to an uptick in foodservice delivery options.

"If you serve convenience to consumers, you can increase margins," said Sylvain Charlebois, a Dalhousie University professor whose research focuses on the food industry. He identified grocerants as a major trend for this year in his annual food price report.

Canadian grocers are competing in a difficult landscape. Retailers Costco and Walmart have stolen billions of dollars worth of market share from traditional grocers over the past decade, and tech titan Amazon's recent acquisition of Whole Foods has prompted a race to implement e-commerce options among companies that had been previously slow to offer delivery services.

They also face pressure from restaurants, where consumers looking for quick dining solutions over complicated home-cooked meals spend their money.

Retail sales between June 2017 and June 2018 increased 0.7 per cent at food and beverage stores, according to Statistics Canada's most recent figures, but fell one per cent at supermarkets and other grocers — excluding convenience stores.

Traditional grocers hope to set themselves apart and draw more people through their doors by adding dining options like T&T's Seafood Bar. Grocerants aim to not only make some money on the restaurant side, but also lure diners into spending money they otherwise wouldn't have in the market aisles.

"They want to welcome you. They want to make sure you spend as much time as possible," said Charlebois.

"It's very rare nowadays you go into a grocery store and there are no tables for you to eat anything."

All 11 locations of T&T, founded in 1993 and acquired by Loblaw in 2009, now offer some level of ready-made food — a concept CEO Lee scaled up significantly when she opened the 70,000 square-foot Richmond location last week.

In addition to the seafood bar, the market also boasts an Asian Street Food stall. Lee plans to continue to add in-store dining to the next three stores the chain will open over the coming 12 months.

Some industry observers are quick to point the finger at millennials — the generation that made headlines for allegedly weakening cereal sales because they found the prep work too difficult — for driving the trend.

The next seafood bar will be located at the upcoming Waterloo, Ont., store, Lee said, where she believes it'll be popular with the nearby University of Waterloo students, especially those from abroad who may be craving a taste of home that's likely impossible to cook in a typical dorm room.

However, millennials aren't the only demographic behind the trend.

Loblaw, which owns a number of other grocery banners including Zehrs, Fortinos and the Real Canadian Superstore, sees in-store dining as a major growth opportunity, said Jim Saufl, vice-president of its market division.

The company started testing the model with its flagship Loblaws location at the former Maple Leaf Gardens in Toronto, where there's ample seating space for customers wanting to sample baked goods and other food served fresh. More than 50 per cent of Loblaw's corporate grocery stores now include dining space and some locations also feature cooking classes and live music on the weekend.

Longo's, which operates more than two dozen markets in Ontario, opened Corks Beer and Wine Bar in 2010. It's since grown to three locations and no longer just serves alcohol, but also food.

The company wants to expand the bar and restaurant concept further and is experimenting with smaller-scale versions of the bar, said Mike Longo, vice-president of fresh merchandising for the company.

It's clear to Longo that grocers will have to continue to adapt to changing consumer demands, who want convenience and value.

"The grocery store mentality is going to continue to evolve."