When customers walk into JJ Bean’s new cafe on North Fraser Way in South Burnaby’s Big Bend neighbourhood, they’re often “shocked” by what they see – or, more specifically, what they don’t see.
0
Mar 11, 2019 6:56 AM By: Kelvin Gawley

The cafe has baked goods, espresso and tea for sale, but nowhere to sit down and enjoy those items. That’s because it’s zoned for industrial uses. 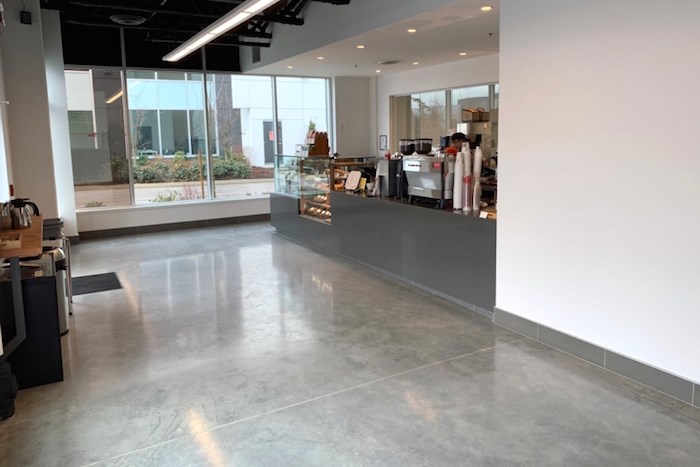 The JJ Bean on North Fraser Way isn’t allowed to have tables or chairs under its current zoning. Photo submitted.

The company uses most of its warehouse space in the industrial park as a commissary to make mixes for its baked goods, which are then baked at its cafes around the region.

Neate said he assumed he could open a cafe adjacent to the commissary with limited seating, but he recently found out that wasn’t allowed.

The zoning allows it to have a sales area for items produce on site, but as soon as you add chairs it is considered a restaurant or cafe, city planner Grant Taylor told Neate in an email.

The current land-use rules in Big Bend are in place “to ensure that the proposed restaurant is not of a broad orientation, would draw customers from outside the industrial area, and is not in close proximity to any existing restaurants/cafes already established in a given area,” Taylor wrote.

A “comprehensive and detailed analysis of the area” determined a new cafe wasn’t needed, Taylor wrote. He pointed out that the nearby Conte Foods Deli already serves food.

Similar cafe proposals have already been turned down in the area, Taylor wrote.

“The overall objective is that industrial-designated areas, like the business parks in the Big Bend, remain industrial in nature,” Taylor wrote. “As more commercial premises are located in industrial areas, this industrial nature is further diminished.”

But Neate said JJ Bean is offering a distinct service lacking in the area, especially its award-winning espresso.

He said the cafe has been open since September and new customers are surprised to find a bare concrete floor when they walk in.

The cafe, currently offering only to-go service, is now asking customers to sign a petition asking the city to reconsider, Neate said.

In an email, Taylor told Burnaby Now JJ Bean is welcome to make a formal rezoning application “at any time.”

“On submission of an application, a report would be prepared to seek council consideration,” he wrote.

Carly Fryer works in the area and said she was happy to see JJ Bean open up nearby. The cafe fills a niche lacking in the area, she said.

The nearby Market Crossing strip mall is too far away to be able to walk there and back during her lunch break and the closer Conte Foods doesn’t provide the same items as JJ Bean, she said.

If the cafe had seating, it would provide a much-needed “third place” where people can step away from the office and socialize, Fryer said.

Where's the beef? Another Canadian fast food chain gets into the plant-based burger game
Feb 27, 2020 1:46 PM