It's the most wonderful season of the year: RAMEN SEASON. 🍜

That telltale chill in the air and leaves gently rustling from limb to ground have me thinking about pretty much one thing only: RAMEN.

Sure, I'll enjoy a decaf double tall no whip oat milk pumpkin spice latte like just about anyone would this time of year. But I'd much rather slurp up springy noodles swimming in a sea of salty, spicy, fragrant broth, thank you very much.

Ramen is an established entity here in Vancouver, and fans divide themselves with a loyalty akin to Harry Potter houses. There's the Danbos, the Marutamens, the Santoukas. And there is always another new ramen spot opening up - often it's down on Ramen Row on Robson in the West End, but occasionally a new one bravely enters the fold and ramenheads will seek them out.

This summer, Kinton Ramen, which hails from Toronto, took their first stab at Vancouver's ramen-dense restaurant scene. They opened up their first B.C. venture on the UBC campus on University Boulevard and brought with them their signature broth, made from pork, chicken, and fish - though they do also serve a vegetarian-based bowl.

It's a tight menu at Kinton, where ramen and a careful selection of sides, take the spotlight. You can guess by the pig on their logo that they specialize in pork, and pork-centric ramen bowls top the menu and are, according to a server at the new UBC location, the most popular options on the menu.

Kinton has a bare-bones pork "Original" bowl (with sea salt, pork, seasoned egg, nori, and scallions), as well as "Shoyu" and "Miso" options, where the broth is accentuated by soy sauce or miso, respectively. Heat-seekers will delight in knowing that Kinton's spicy broths are just that: spicy with plenty of big hot punches. 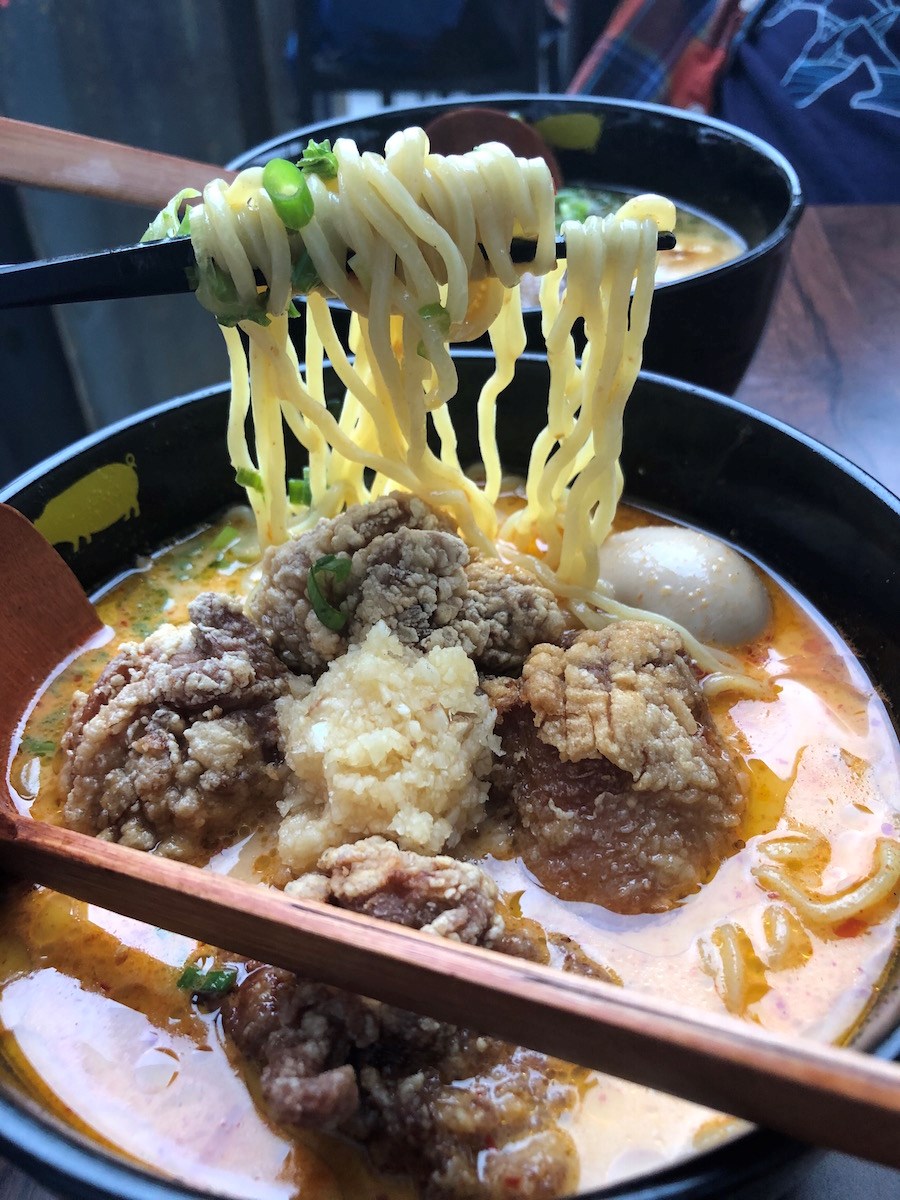 There's a spicy version of their pork broth, which is also called into action for their Karaage Pork Spicy Garlic option. That bowl pairs the pork broth with heaps of heat from chilli peppers with tender, juicy orbs of fried chicken, and your choice of thick or thin noodles. The kitchen can tweak the amount of heat for the less hardy among the ramen warriors (raises hand) who need those flames tamed a wee bit, but the result is still a fiery, creamy, rich pork broth that will definitely open up those sinuses. Incidentally, the veg broth's spicy pow also comes from chilli peppers, but those looking to feel the burn with a chicken broth-based bowl of ramen will get the heat from jalapeños.

Kinton offers a few side dishes, if you don't want to commit to a big bowl of noodles or you've got a big appetite. Check out their gyoza, which are pan-fried and very juicy, as well as their takoyaki, which are moist, fluffy, and creamy and studded with tender octopus.

To celebrate their official Grand Opening, Kinton Ramen UBC will be offering 50% off all signature ramen dishes for dine-in guests on Friday, Sept. 25 from 11:30 a.m. to 10:30 p.m. In addition to half-price ramen bowls, patrons who visit on the official launch day will also receive a coupon for free gyoza valid until October 31.