Does it really 'bleed'? What's it made of? Is it healthier for you? Is it any good? We'll try to answer your burning questions.

I started hearing about the Impossible Burger a few years ago when it was showing up on menus at restaurants in Los Angeles and was fascinated by the claim that the meatless patty actually "bleeds" when you bite or cut into it.

Fast forward three years, and now the Impossible Burger has hit the Canadian market officially for the first time. In Metro Vancouver, while there are a couple of independent restaurants now able to bring the patties to their menus, the primary out-of-the-gate restaurant is our very own White Spot, and quick-serve sibling Triple O's, who will have Impossible on their menus at al B.C. and Alberta locations starting Sept. 19.

Okay, fine. Plant-based burgers raise a lot of questions, including those that fall under the category of ethical and personal decisions. I'm a food-loving omnivore who, at best, eats plant-based about two-thirds of my daily meals. And while I'd prefer those plant-based meals to be made of real, whole, unprocessed foods, I am personally okay with trying mass-produced meat substitutes, but don't eat them with any great regularity.

In the context of this story, maybe it's of interest to know that while I love a good veggie burger, I also can't handle crumbly, mushy veggie burgers loaded with things like beans, corn, and oats. But since I do enjoy plant-based foods, and don't mind swapping out a beef burger for a meatless one, having a more "meaty" sub is quite appealing.

In short: I'm probably exactly who the Impossible Burger is for.

As part of a media kick-off, I was among the first Canadians to get a bite of the Impossible Burger on home turf at the White Spot. 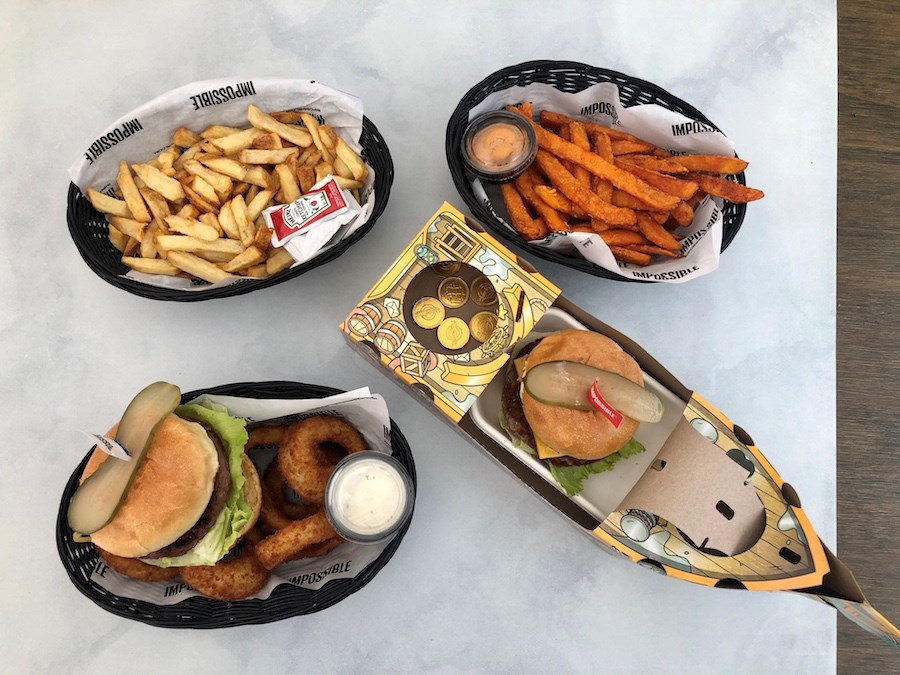 You can sub the Impossible patty on any burger on the White Spot or Triple O's menu. Lindsay William-Ross/Vancouver Is Awesome

White Spot and Triple O's have the Impossible Burger on their menu in several options. At White Spot, they've come up with the Avocado Impossible Burger, which features the patty topped with pickled red onion, avocado slices, and a jalapeño ranch sauce. Meanwhile, at Triple O's, they're doing it up as a straightforward burger, or available with cheese, or mushrooms and cheese. You can also just swap out a beef patty for the Impossible one from any burger on the menu.

The Impossible patty itself is vegan, however you do have to make some careful customizations to have a totally vegan burger, which would include swapping out the bun, and ditching the ranch sauce, for example. And until the White Spot carries a plant-based cheese (please?) you'll have to forego the melty slice.

At first glance, the Impossible patty looks very much like meat - it looks like a typical fast-food burger - and its size and shape are comparable with the standard White Spot beef burger patty.

And then the "first bite" test... did it "bleed"? It did not. But it was visibly juicy and held its shape just like a beef burger.

Thanks to a proper hard sear and good seasoning, the burger gets a nice salty crust on the exterior and keeps a tender interior with a good bite. Mine was a little cooled down due to the delay from coming off the grill on the Triple O's truck to the quick little photoshoot I put it through, then some extra time getting myself over to a table where I could set everything down and eat, and I would recommend cutting down delays like that as much as possible in order to get the most out of the taste.

The get-it-while-it's-hot approach was affirmed by a "blind" taste comparison of a regular White Spot burger patty and the Impossible. The hot-off-the-grill Impossible burger (which we tasted absolutely naked - the patty, not us!) was even better than it was in my burger. When it comes to telling them apart, I could discern the difference in the two, only because while the Impossible goes quite aways in mimicking a meat burger, there remains that distinct deeply beefy flavour you can only get from a traditional patty.

All this to say: the Impossible Burger is a damn good meatless patty.

I can't answer all of the possible ethical and personal questions you may have about eating the Impossible Burger, but I can explain how they do it. The Impossible Burger is made from soy and potato proteins, coconut and sunflower oils, binders like methylcellulose (a culinary binder commonly found in ice cream, sauces, and jams) and food starch, and heme.

Heme is what makes the Impossible Burger "bleed," or at least have the qualities of animal blood. Heme is a molecule found in every living plant and animal, and Impossible extracts it from plants for their product. You can geek out on how the company works with heme here. 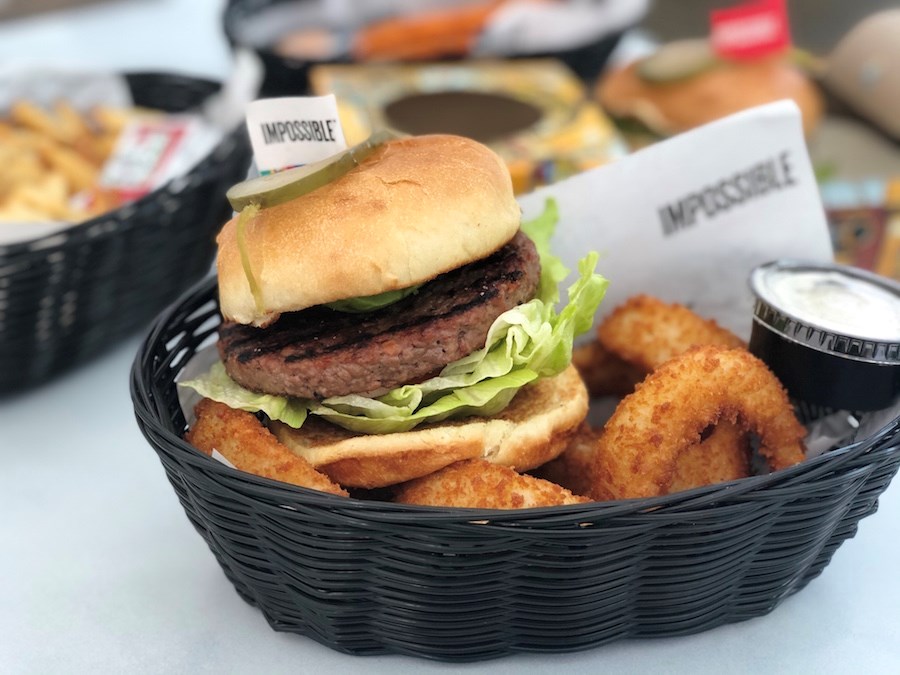 White Spot has the Avocado Impossible Burger, with fresh avocado, pickled red onion and a jalapeño ranch sauce - this one is without the sauce. Photo by Lindsay William-Ross/Vancouver Is Awesome

Impossible's current burger is a 2.0 version of what they initially introduced in 2016 (after five years of work on the product). While it is now widely available at restaurants, fast food chains, and in grocery stores in the U.S., it has just landed in Canada. You can definitely find it starting Sept. 19 at White Spot and Triple O's, and you can check the Impossible site to see who else near you may be serving it now, or soon.