Owners Candice and Miguel Kabantsov want people to forge new relationships with alcohol and one another at their Copper Spirit Distillery.
Jul 20, 2019 6:40 AM By: Bronwyn Beairsto

It’s within the crisp concrete walls of the newly open Copper Spirit Distillery that owners Candice and Miguel Kabantsov want people to forge new relationships with alcohol and one another.

“We discussed how we could create an industry that was focused on conscious consumption, not over consumption,” said Candice. 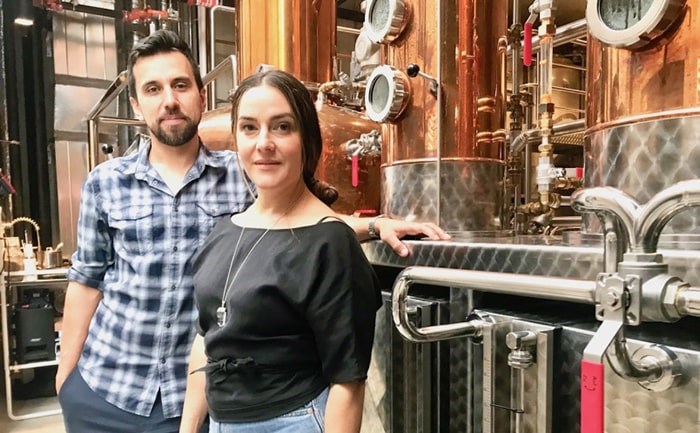 “We wanted to de-clutter the space so that when you come in here, you don’t feel like you’re on Bowen,” said Candice. “You leave the gossip, you leave the drama, you leave it at the door.

“It’s a blank canvas for you to connect with people and form intimate relationships.”

The Kabantsovs, who have two young children, moved to Bowen in 2011. At the time, Miguel was commuting but soon realized he wanted to work on Bowen. So the couple discussed how they might contribute to the Bowen economy. They knew they wanted to create a space for people to relax and connect. Miguel suggested they build a distillery together.

“I said, if you will let me use beet juice and bee pollen and put vitamins in the cocktails, then I’ll pair up, I’ll partner with you,” said Candice.

The couple bought the Snug Café-adjacent lot in September 2014. Four redesigns later, they received the building permit in 2017.

“That’s why nobody bought this lot for years, because they knew it would be a headache dealing with the muni and getting permits,” said Candice. “We were naive and ambitious and we took a big risk.”

A sticking point was the cove parking spaces requirement. In the end, the municipality reduced the number of spaces required for the development in exchange for three one-bedroom suites above the tasting room and a fee paid to the Municipal Parking Reserve.

“The process of starting a business here is not easy,” noted Candice.

Before the Copper Spirit project, neither Candice nor Miguel had much experience with creating alcohol products but in the time since, each has honed their expertise.

Miguel is the distiller. “He’s amazing at researching. His dad’s Russian so he translated a lot of ancient Russian recipes,” said Candice. “So definitely some secrets there that we discovered.” Miguel runs the copper stills that give the distillery its name (one can see the stills from the windows of the tasting room). 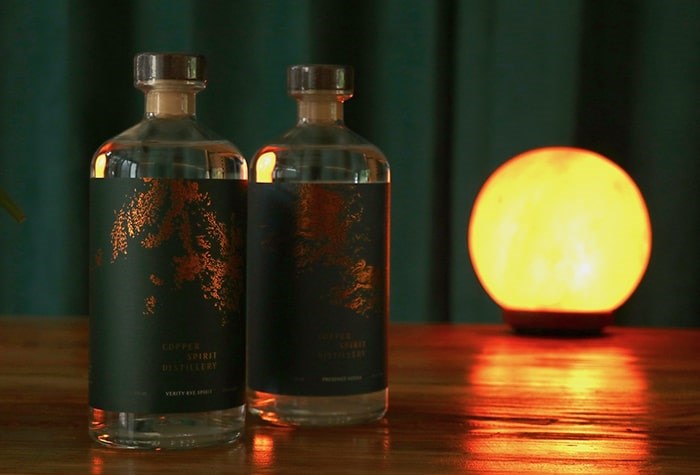 Candice is the mixer. “I love mixing flavors. I always had secret dreams of being a mixologist, but I never thought it would apply to my business life,” she said. There’s a research and development lab above the stills where Candice can work with extracts and alcohols to create liqueurs and elixirs.

So far, the couple have created a vodka, a rye and there’s a gin in the making. They’ve also put on a whiskey but that will take three years to mature.

All of the products are as environmentally “clean” as Miguel and Candice can make them.

It starts with the building, which is designed to collect rainwater for filtration and use. Everything inside the building is run off electricity so no fuels are burned.

The grain and the yeast that go into the alcohol production are organic and the enzymes (which trigger the reaction to turn starch and grain into sugar) are non-GMO. And no alcohol touches plastic, the liquid is all in metal and glass.

Though organic yeast in particular makes the production more expensive, Candice and Miguel both said it’s worth it.

“We just feel like there’s no compromise. If we’re going to make a clean product, it has to be clean,” said Candice.

“We’re hoping that will just translate into the end experience. If we’ve put our full heart into this process, that people will feel that,” she said.

And so far it’s working.

Eventually Copper Spirit will be open 11 a.m. to 11 p.m. Thursday to Monday but hours of operation are looser for the moment.

“Everything’s not quite in place,” said Candice. “We wanted to just get selling because we do have the permit to sell.

“I had to sacrifice a bit of my grand vision. Because it’s summer, it’s time. We’re ready enough.”

The couple said that so far, they’ve been energized by an overwhelmingly positive response. And they’re open to collaborations and events.

They’re also looking to the future.