A seasoned chef with experience in Vancouver, Paris, and Copenhagen is behind the tantalizing new venture in Kits
May 17, 2021 11:35 AM By: Lindsay William-Ross 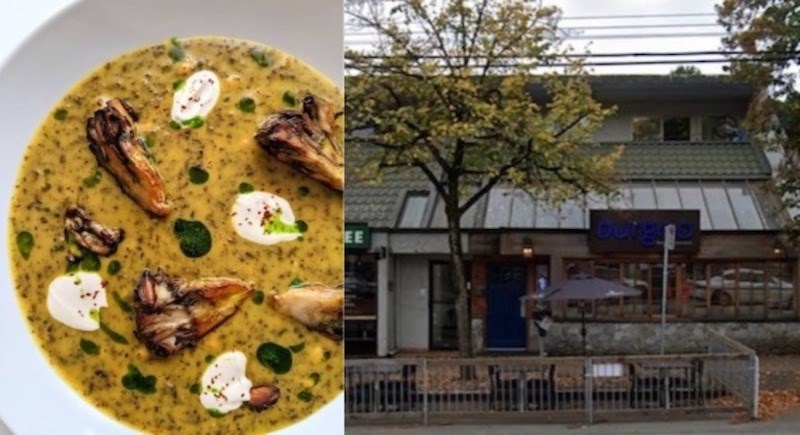 Left, a mushroom and chickpea stew by Iranian-born Vancouver chef Bardia Ilbeiggi, who is opening Delara, a modern Persian restaurant, in the former Kitsilano location of Burgoo.@bardiail/Instagram (left) and Google Maps

The end of 2020 meant the end of a decade-long run for the Kitsilano outpost of comfort food spot Burgoo, but now we know what is gearing up to take its place.

A new modern Persian restaurant called Delara is renovating the space at 2272 W. 4th Ave, and is aiming to have the doors open later this summer.

The restaurant is the venture of Vancouver-based chef and culinary consultant Bardia Ilbeiggi, whose personal Instagram is peppered with beautiful dishes he has created at home fuelled by his Iranian heritage and professional technique.

Those dishes include a chicken kebab (joojeh kebab) made with yogurt and saffron marinated chicken that brushed with a saffron-infused brown butter after coming off the grill, or a dish called "Aush reshteh," which the chef describes as "a staple of Persian cuisine: hearty soup of herbs, legumes, noodles, kashk (whey sauce), fried shallots and mint oil. It's what you need on a rainy day."

With an impressive resume with stints in Paris and Copenhagen, Ilbeiggi has also worked in Vancouver as Head Chef at Farmer’s Apprentice from 2016 to 2019, and was the Sous Chef at L'Abattoir from 2012 to 2016.

We don't know much about the specific plans for the Delara space or menu, though the restaurant does appear to be hiring for key positions like General Manager and Sous Chef at this point.