Don’t fear the near beer: The Growler’s guide to non-alcoholic beer

We sat down with the owner/brewer of Dogwood on one hot, sunny day with seven of the most popular near beers available in B.C. to figure out which one was best (or least worst, anyways).
0
Nov 9, 2018 10:37 AM By: Rob Mangelsdorf

I think we can all agree that beer is awesome, otherwise why would you be reading this right now. However, there are times when you might want something to drink without any alcohol in it. Maybe you’re the designated driver; maybe you have health issues; or maybe, if you’re like Dogwood Brewing owner/brewer Claire Wilson, you’re pregnant or breastfeeding. 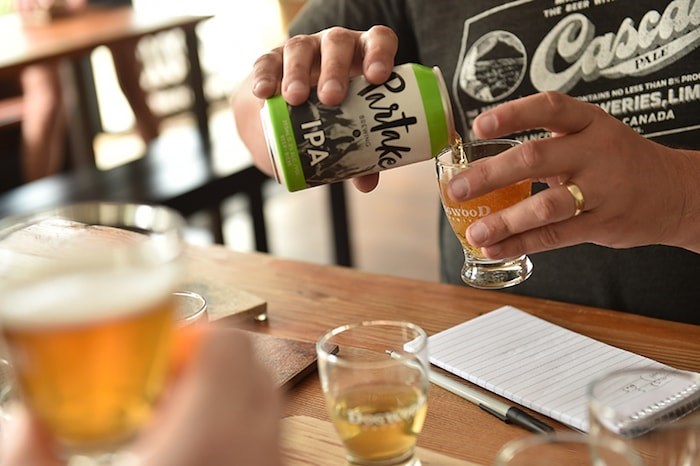 Except that “near beer” doesn’t exactly have the greatest reputation. For years, there were only one or two options available at the grocery store, and they all tasted like watery garbage.

That’s changing, however. In recent years craft alternatives have been popping up, domestic macro brands have been reformulating their recipes and European import brands have entered the market. There are more alcohol-free beer options available than ever, and with so many choices, where do you even begin?

With that in mind, Claire and I sat down at Dogwood one hot, sunny day with seven of the most popular near beers available in B.C. to figure out which one was best (or least worst, anyways). 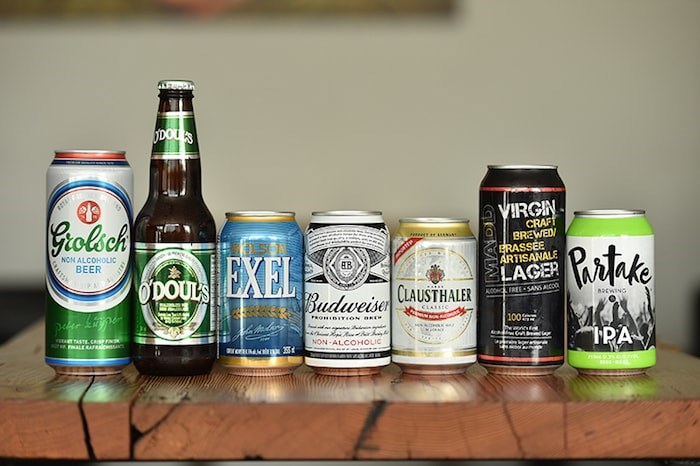 The contenders (Photo by Dan Toulgoet)

Methodology: We rated the beers out on a scale of 0-10, based on the likelihood of someone throwing the beer back in your face if you served it to them without telling them it was a non-alcoholic beer (10 being they wouldn’t notice and 0 being a pint glass to the face).

The Growler: This one is clearly German, which I have high hopes for. Germans, as you know, take their beer pretty seriously. They take everything pretty seriously, actually. Let’s take a look at the ingredients… water, barley malt, hop extract, 0.49% alcohol.

Claire Wilson: That’s the threshold. 0.5% is the most alcohol you can have [in a non-alcoholic beer], so they are right on the threshold. It’s nice and clear, it smells like straw and wort.

Growler: Yeah, it smells very sweet, very grainy. It looks like beer, at least. It does not smell like it, though. It smells like beer that hasn’t been fermented yet.

Wilson: Yeah, that does taste quite sweet. It’s not terrible, but it doesn’t really taste like beer. It’s a lager style, but there’s no noticeable hop aroma. There is a tiny bit of hop bitterness to it.

Growler: Yeah, it’s so cloyingly sweet that the hop bitterness that is there isn’t enough to dry it out. The sweetness really lingers, it’s like a soda pop.

Wilson: It’s refreshing, but it’s not very reminiscent of a German lager.

Wilson: So this is brewed at Niagara College. They’ve had a brewing school there for ages.

Growler: Oh interesting. So this a lager made by MADD, Mothers Against Drunk Driving, clearly to encourage people not to drink. And I guess they’ve teamed up with Niagara College to brew this. And 10 per cent of net sales go to MADD Canada.

Wilson: This definitely smells oxidized, the aroma’s not as appealing as the other one. But it’s not as sweet.

Growler: Yeah, it’s definitely drier. To be honest, I don’t know how long this was sitting on the shelf. I feel like this is an old beer, and I’m getting a bit of that wet cardboard flavour. But beyond that, I really prefer this beer to the previous one. It’s not overly sweet, it’s got a bit of hop bitterness to it, it has a nice, dry finish.

Wilson: Yeah, it’s not that bad. Niagara is a teaching brewery, so they know what they’re doing. It would be interesting to try one that was in perfect condition. But even the off flavours are beer off flavours.

Growler: That’s true. This is absolutely a beer, and not a beer-flavoured soda pop.

Wilson: Not a good beer, mind you, but it’s beer.

Growler: So this is interesting. This is definitely a craft take on non-alcoholic beer, it being an IPA. Brewed in Toronto. I hope there’s some hops in this.

Wilson: Yeah, that smells like an IPA. It’s got those Cascade hops, maybe some Citra.

Wilson: This really does taste like beer. It’s enjoyable, the hops are lovely.

Growler: I quite like this, I’m shocked. If someone poured me this and didn’t tell me it was non-alcoholic, I’d never know.

Wilson: Without having the alcohol or having more body to balance it, they’ve done a great job with the hops, because the hops are lovely. I’m impressed.

Growler: Completely agree. They are hitting what they are aiming for, and that is a beer drinker’s non-alcoholic beer.

Wilson: If I had known this was on the shelf when I was pregnant, I would have drank it. 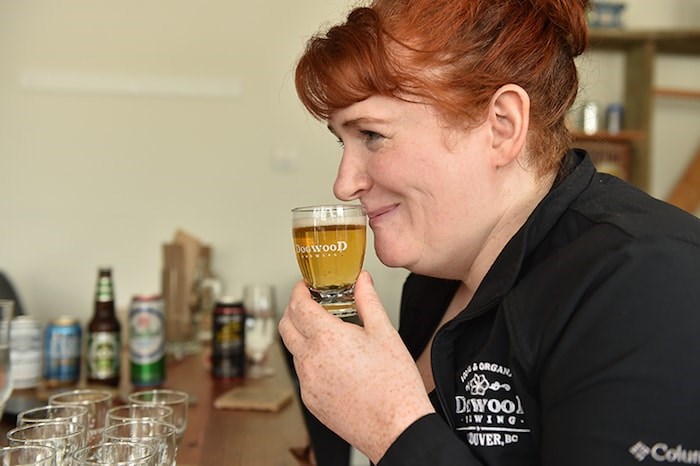 Claire Wilson tries out some near beers (Photo by Dan Toulgoet)

Growler: This is one that I’m most interested about, because I have a friend who doesn’t drink anymore and he swears by it. Which makes sense, because I feel like Bud would have the technology to do it right.

Wilson: Yeah, there’s two ways to make it, really. You brew it and don’t ferment it so it doesn’t have any alcohol, or you ferment the beer fully and vacuum distill the alcohol out of the beer. But it’s not cheap, that technology.

Growler: It smells a lot like a Budweiser, which is to say, like not much of anything. Faint grainy cereal, a bit rice-y. Nice head retention. Actually, that’s not terrible.

Wilson: I haven’t had a Budweiser for a while, but it tastes like a Budweiser. It’s clean, it’s not flawed.

Growler: It’s not sickly sweet, it has a crisp, dry finish. Of the lagers that we’ve tried so far, this is clearly my favourite. There isn’t a ton of flavour—it’s a Budweiser after all, so that’s to be expected.

Wilson: I think that’s what they were trying to make, and I think they nailed it.

Wilson: When I think non-alcoholic beer, I think O’Doul’s.

Growler: Totally, I think it’s kind of become shorthand for non-alcoholic beer. For years it was the only option available.

Wilson: It’s the classic, for sure.

Wilson: Almost no character. It’s very easy to drink, though. There’s a tiny bit of bitterness to it, a tiny bit. But it doesn’t really feel like beer. It’s very balanced and it goes down like nothing, but that malty character isn’t really there.

Growler: It is refreshing. It’s light-bodied without being overly thin. I’m enjoying it the more I drink.

Wilson: Yeah, it doesn’t really have any flaws.

Wilson: Two years ago, a friend of mine was pregnant and she asked me what non-alcoholic beers were any good, and I had no idea because I hadn’t tried any. So it’s good we’re doing this.

Growler: Have you ever tried to brew a non-alcoholic beer?

Wilson: When I was at Big River Brewing, they changed the drink driving rules and that really hurt our beer sales, so management encouraged me to brew a low alcohol beer. I used dark malts to give it a bit of colour and a bit of malty flavour. It fermented out to about 1.5%, but it was so thin and so watery that it wasn’t that enjoyable to drink.

Growler: So Molson Exel. This one has been around for a while, as you can tell by it’s branding.

Wilson: It’s a “classic” look for sure. This one smells a lot like Canadian, actually.

Growler: Yeah, no hops on the nose. It’s pretty thin, pretty watery. Not as sweet as some of the beers we’ve tried.

Wilson: It’s still definitely sweet for a beer, but it’s not like a pop, like some of the others.

Wilson: There’s a good head on this, it’s very clear.

Growler: Yeah, the others had very little head retention.

Wilson: This is very much in the same vein as the first one. It’s a very sweet and malty.

Growler: Considering the can says it’s fully fermented, it sure doesn’t taste like it.

Wilson: But look at the lacing!

Growler: That’s what’s most impressive about this beer, the head they’ve managed to get on it. It’s not as watery as some of the other examples.

Wilson: Yeah, the carbonation is good, you’re getting that kind of sharpness on your tongue, but it’s just way too sweet. It’s very soda-like. It’s a malt soda, basically. It’s similar to the Clausthaler, so maybe that’s what Europeans expect in a non-alcoholic beer.