For five decades now, visitors and locals alike in Vancouver have tucked into plates of pasta at Gastown's Old Spaghetti Factory. To celebrate their half-century of serving up spaghetti and more here, the restaurant will offer their original 1970 menu - with 1970 prices - for one day only.

The Old Spaghetti Factory in Vancouver will mark their 50th anniversary on March 3, 2020. From 11 a.m. to 8 p.m., the Gastown restaurant will have their all-inclusive spaghetti entrees available for just $1.75. The offerings will include throwback items like spaghetti with chicken liver sauce.

While the retro prices are certainly enticing, the Old Spaghetti Factory is using their anniversary festivities for a cause better than your own bottom line: On March 3, they'll donate all proceeds from food sales to the BC Professional Fire Fighters’ Burn Fund. Additionally, diners will have the option to add on a donation to their bills.

OSF's Spaghetti Classics (which in 2020 are priced from $12.50-16.50) are part of the restaurant's "it's all included" offerings, which means each pasta main comes with a side of their Italian sourdough bread with whipped garlic and plain butter; your choice of Minestrone soup or a green side salad; Spumoni ice cream for dessert; and hot tea or coffee. Sauces, of course, include traditional options like meatballs, meat sauce, or marinara sauce, or the OSF's signature Brown Butter and Mizithra Cheese, which is a recipe from the OSF's Portland, Oregon-based founder's family.

"While a lot has changed over the last 50 years, The Old Spaghetti Factory still makes its sauces and dressings fresh daily," notes a media release.

Vancouver's Old Spaghetti Factory was the first to launch in Canada, just one year after the restaurant's 1969 debut in the U.S., and is operated by a separate company. 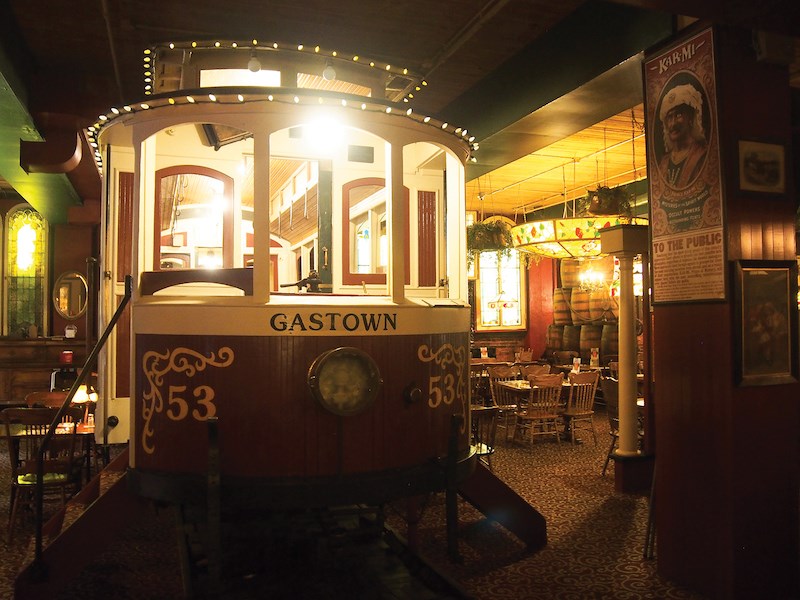 The Gastown location, which some considered haunted, is well-known for their quaint decor and casual family-friendly vibe. It's also home to one of the only surviving streetcars from the B.C. Electric Railway fleet. It's 1904 trolley car number 53, loaned to OSF in 1970 by Ernie Plant. The streetcar operated in Vancouver for years, then became a work car; by the late 1950s all of Vancouver's streetcars were off the roads, and most of them torn apart and burned. Installed during the restaurant's construction phase, legend has it the ghost of its onetime conductor lingers on.

While your odds of scoring a seat in the trolley on March 3 are slim, you may want to take a trip back in time anyhow for their $1.75 menu. Just factor in a wait; in 2010 for their 40th anniversary the Old Spaghetti Factory in Gastown rolled back their prices and saw a line down Water Street, welcoming 2,000 guests on that one day.