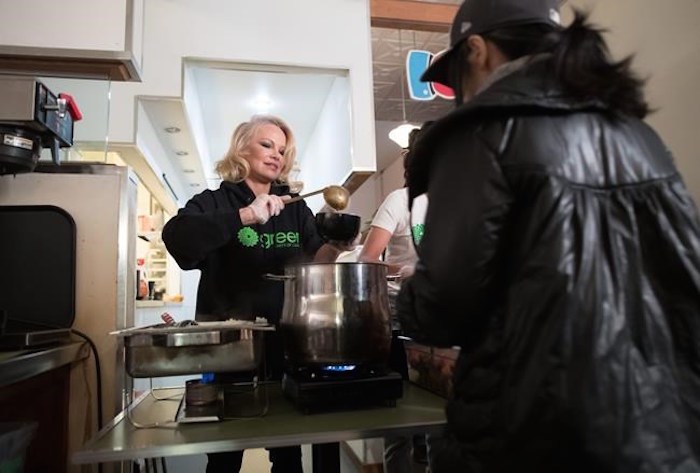 Actress and animal rights activist Pamela Anderson serves free vegan meals during an event held by Green Party candidate for East Vancouver Bridget Burns to register voters for the federal election, in the downtown Eastside of Vancouver, on Wednesday October 9, 2019. Actress Pamela Anderson is asking Prime Minister Justin Trudeau to take meat and milk off prison menus to help the planet and the health of federal inmates, and save taxpayers some cash, to boot. THE CANADIAN PRESS/Darryl Dyck

OTTAWA — Actress Pamela Anderson is asking Prime Minister Justin Trudeau to take meat and milk off prison menus to help the planet and the health of federal inmates — and save taxpayers some cash, to boot.

The former Baywatch star makes the pitch in a letter to Trudeau part of her work with the animal-rights group PETA, writing that she hopes Canada embraces what she calls a "simple but effective way to reduce costs and improve lives."

She wants Canada's federal penitentiaries to serve vegan meals of beans, rice, lentils, pasta, vegetables and fruits, which she bills as sources of all the nutrients one would need, "at a fraction of the cost of meats and cheeses," since most vegan ingredients don't need to be refrigerated.

In its most recent departmental plan, Correctional Service Canada says it provides nutrition "sufficient in quality and quantity" and in line with the Canada Food Guide.

Her letter also points out a UN climate panel report calling for a dietary shift to help combat climate change — another interest for the actress who backed the Greens and their leader Elizabeth May in the just-concluded federal election.

Four years ago, Anderson travelled to Arizona to serve vegetarian meals to the approximately 8,000 inmates at the Maricopa County Jail alongside Joe Arpaio, the controversial local sheriff who made the decision. Arpaio estimated the move would save US$100,000 a year.

Anderson says the jail reduced costs by $273,000 when it switched to vegetarian meals, although reported savings vary widely.

She says the savings could be even higher for Canada's almost 40,000 inmates — a number that includes inmates in provincial jails, which fall outside federal jurisdiction.

A report in May from Statistics Canada said that in the fiscal year 2017-18, there were on average 24,657 adult inmates in provincial or territorial jails, while the federal portion was 14,129.

This report by The Canadian Press was first published Oct. 31, 2019.