The colourful Art Deco-era building at 3473 Cambie Street, home to Pronto restaurant since 2011, is slated for the wrecking ball.

Pronto shared the news Monday night that the building's new owner has plans to demolish the structure. And Pronto is gearing up to close for good on or around March 2. 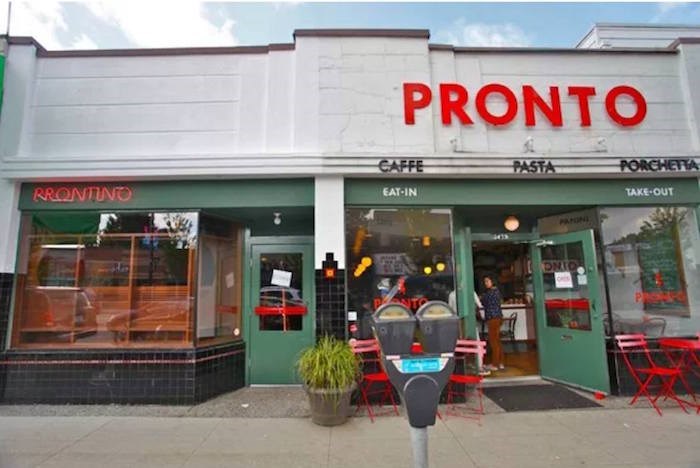 The new owner has been in the permit application process for several months and has functioned as Pronto's landlord. The plan for the property as it stands is to tear down the existing structure and replace it with a new 4-storey build that will house a dental office on the ground floor, two floors of smaller condos, and a fourth-floor penthouse condo.

Angela Maida, who operates Pronto and Prontino, its sibling cocktail bar, says she was a longtime Cambie Village resident when she opened the restaurant nearly seven years ago.

Maida tells V.I.A. via telephone that she was drawn to the building's art deco aesthetic, and created the restaurant's look based on many of its existing 1940s-era features.

From the black tile on the exterior to the overall look and feel of space, Maida says she and her team were careful to respect the structure and to work those elements into what became Pronto, and, similarly, when they took over the dry cleaner's next door a couple of years ago to create Prontino.

Ahead of Pronto taking up shop there, the address was home to Art's Flowers and Gifts.  The store was open in that location for 18 years, and, as they say in their farewell message, they even survived the Canada Line going in.

It was around the Canada Line constructions time that the Cambie Village BIA was formed, whose motto reflects the community's role as a residential and retail "heart" of Vancouver.

Rania Hatz, Executive Director of the Cambie Village BIA tells V.I.A. via telephone that the neighbourhood has always been about its residents, offering them everything they needed within easy access. With the historic Park Theatre as an anchor on that particular stretch of Cambie, Hatz acknowledges that for decades now this has been an area where locals came to shop, enjoy entertainment, and live.

Hatz agrees that tearing down the Pronto building represents "a real loss to the neighbourhood."

She says the proposed new business at 3473 "won't generate the same kind of foot traffic we have now."

"And it won't generate the same great meatballs we have now!" adds Hatz.

Maida also acknowledges that her business has been about the community, and that in a given year, thousands of people cross their threshold to enjoy spending time and eating in Cambie Village.

"People come in all the time to say how grateful they are to have this [restaurant] within walking distance of their home," says Maida.

For Pronto's internal community--its staff--this is the closing of a chapter, but not the book. Maida has been prepping a new restaurant, Centro, at 1037 Denman Street, and the timelines for the proverbial door to Pronto closing and the "window" of Centro opening are lining up pretty well.

The plan is for the Pronto staff to wrap up at the start of March and move over to Centro, which is in its final stages of completion. Maida says there will be much the same as Pronto menu wise, with some changes and additions, and for this space, they were inspired by its 1970s vibe to create Centro's look, with the help of Scott Cohen Design. (See the cool renderings for Pronto's design here.)

Now Pronto will focus on welcoming as many guests as they can in its final weeks. For Maida, it's a bittersweet time, and a reminder just how fragile commercial leases can be for business operators in Vancouver. Still, she doesn't want to dwell on the negative.

"I've had a really good run here," says Maida. "I've met so many great people from the neighbourhood. I have to stay positive."