Nearly half of seafood samples tested at Canadian grocery stores and restaurants is wrongly labelled, according to an investigation into seafood fraud that claims such practices can harm consumer health and wallets, as well as hurt the environment.
0
Aug 28, 2018 9:37 AM By: The Canadian Press

When consumers buy butterfish or white tuna at a grocery store they may instead receive a fish dubbed "the laxative of the sea" because escolar can cause diarrhoea, vomiting and other stomach problems.

Nearly half of seafood samples tested at Canadian grocery stores and restaurants is wrongly labelled, according to an investigation into seafood fraud that claims such practices can harm consumer health and wallets, as well as hurt the environment. 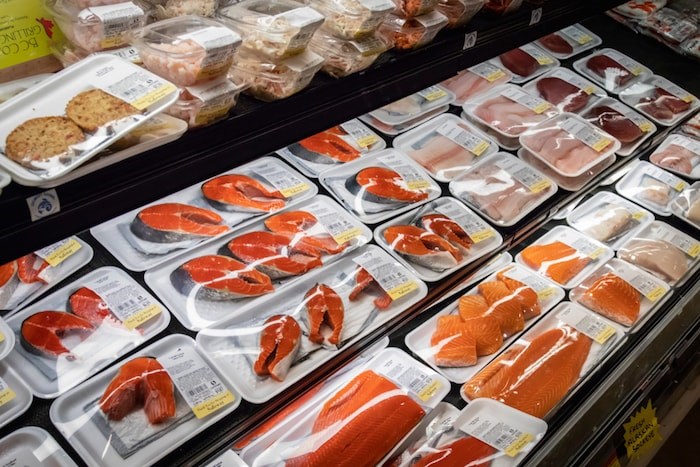 Seafood in a grocery store in Vancouver (Stefan Malloch / Shutterstock.com)

It collected 382 samples of snapper, sea bass, sole and other fish that other studies indicate are often substituted. They chose samples from 177 retailers and restaurants in five Canadian cities.

Scientists at laboratories at Tru-ID, a Guelph, Ont.-based lab, used DNA barcoding to determine the species of fish. That was compared to the Canadian Food Inspection Agency's Fish List, which contains acceptable market names for various fish species.

They found 44 per cent of the fish were not what the label claimed.

The CFIA, which is responsible for mitigating food safety risks and monitors food fraud in the country, is reviewing the report, a spokesman wrote in an email.

It's been a problem in the industry "forever," said Hana Nelson, a fishmonger with Halifax-based Afishionado, who was briefed on the study's results before they were made public.

She wants to believe the issue isn't people acting maliciously, but rather mostly accidental.

"I'm not so pessimistic to think that a lot of people are doing it on purpose," she said. "I think it's just the nature of the supply chain. It's really, it's allowed for that lack of transparency."

Seafood is susceptible to food fraud because of a complicated global supply chain that has opportunities for mislabelling at many stages from the fishing boat to the restaurant or store.

While some mislabelling happens accidentally, Levin said, the majority appears to be deliberate. She stressed the restaurants or stores where the samples were collected are not necessarily the ones responsible for misguiding consumers and may instead by victims themselves.

"Economic profit is the primary driver," she said, noting the pattern is for more expensive fish, like red snapper, to be replaced with a cheaper alternative, like tilapia.

Industry insiders often try to convince Robert Hanner, an associate professor at the University of Guelph whose lab tested the samples, that the problem amounts to no more than random mix ups: a confused employee laying out fish under an incorrect label.

"If it were purely random, you would expect that once in a while you'd get the good stuff when your'e paying for the cheap stuff," said Hanner, whose lab demonstrated the first use of DNA barcoding to show seafood fraud in Canada about a decade ago.

"There's no evidence that that ever happens."

This means shoppers pay higher prices for lower value fish, and may unknowingly consumer harmful products, like escolar. People living with allergies are especially at risk as they may eat something that could seriously harm or kill them.

People may also mislabel seafood to mask illegally caught fish, Levin said. When this happens, it hampers efforts to curb overfishing and protect at-risk areas, among other things, according to the report, which adds illegal fishing is often linked to troubling practices like modern slavery and child labour.

Oceana Canada wants the federal government to increase labelling requirements to match those in the European Union. In the EU, labels must show the fish's scientific species name, catch method, and origin — among other information. It also requires catch documentation. Studies show that seafood fraud rates appear to have fallen since the union implemented the more stringent labelling practices.

Oceana Canada wants what it calls "boat to plate" traceability.

"We need Canada to implement a traceability system to keep everyone accountable," Levin said.

The CFIA did not immediately answer questions about the calls it strengthen labelling requirements and boost traceability.