They're a little late for Valentine's Day, but Starbucks Canada has just launched a new kind of tea lattes they say is like getting a "hug in a cup."
0
Feb 27, 2018 10:16 AM By: Lindsay William-Ross

They're a little late for Valentine's Day, but Starbucks Canada has just launched a new kind of tea lattes they say is like getting a "hug in a cup."

Before you try to figure out what a "hug in a cup" might look, taste, or feel like (awkward), here's what's going on: These new Teavana tea lattes are "handcrafted" with ground tea leaves that are blended with steamed milk, rather than the ol' dunk a tea bag in your cup. And a hug is definitely more gentle than a tea-bagging, you might say.

Kicking off on February 27 across Canada, there are three options for these new "cashmere"-like tea lattes: Black tea, Rooibos, and Matcha.

But wait, there's more. Namely roses. These lattes come with the option to make it a "Blossoming Rose" version. No, your drink is not served on a bed of rose petals (that's up to you, you sexy thang) but rather with the addition of a Blossoming Rose syrup and rose and hibiscus sprinkles. The Blossoming Rose pairs best with Rooibos, but you can add it to the black or matcha one, too. 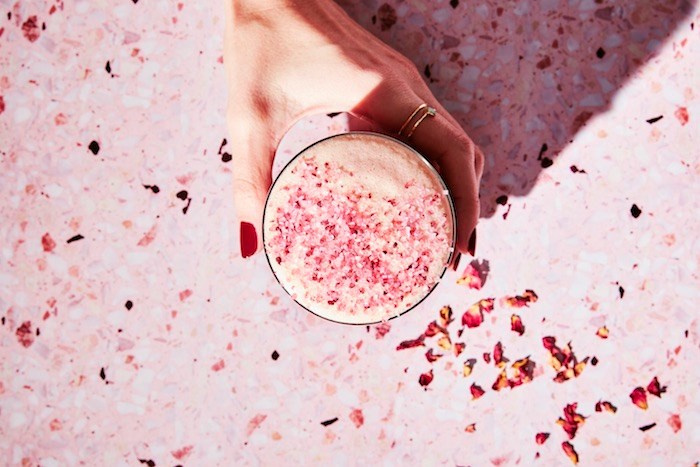 Here's where Canada gets bragging rights: We're the first to get these tea lattes, because we are a nation of tea lovers.

We got to taste-drive the tea lattes around the office at V.I.A. HQ, and they certainly were more lush and creamy than the average tea latte. The Blossoming Rose wasn't everyone's cup of tea (wink!), but blended with Rooibos it did have a nice balance of flavours and floral-sweet notes.