It’s been five years and over four million glasses of beer since Steel & Oak opened its doors on Third Avenue and Stewardson Way in New Westminster.
0
Jun 28, 2019 7:32 AM By: New West Record

It’s been five years and over four million glasses of beer since Steel & Oak opened its doors on Third Avenue and Stewardson Way.

Co-owners Jorden Foss and Jamie Garbutt now juggle a surging beer business along with their wives Alissa and Diana. 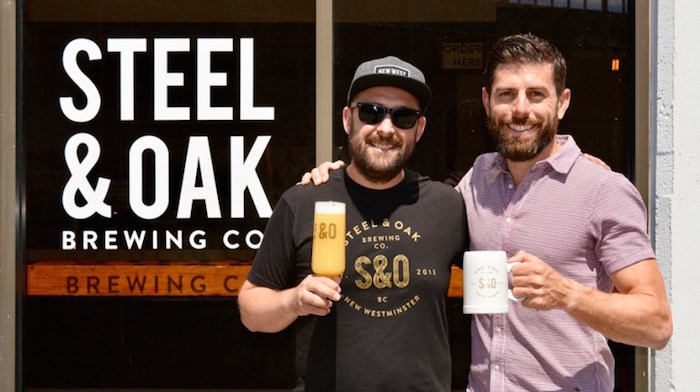 Oh, and they have five boys under the age of six.

“It’s been busy to say the least,” said Foss. “I got my first grey beard hair the other day and I thought, this is actually pretty good that it took this long. I don’t know if it’s from the kids, the beer, or both.”

Foss operates the brewery, while Garbutt focuses on his real estate company, Garbutt Dumas, also based out of New West.

“It’s fun,” said Garbutt. “Jorden carries the stress; I get to show up, drink beer, and be the fun boss. But seriously it’s been an incredible ride. We’ve both learned how to operate a manufacturing and retail business in a short period of time. It’s not easy.”

Steel & Oak’s beers are now available across B.C., including Government Liquor Stores. What started out as a tasting room-focussed business has now turned into something much larger than either Foss or Garbutt could have anticipated.

“We just wanted to create a cool spot that New West was proud of. I don’t think either of us could have imagined we’d have cans, bottles, and draught beer all over BC at this point,” Foss said.

When asked what the next five years hold for the little brewery beside the overpass, in between the train tracks.

Garbutt says, “We don’t want Steel & Oak to get that much bigger, but we do want to create other cool opportunities and gathering places in our city. So, we definitely have some ideas on the go on what we can do next in New West.”

Steel & Oak will be celebrating with a big party on Sunday, July 7 in the parking lot behind the brewery, from 1 to 6 p.m., with Big Day BBQ, the Down Low Chicken Shack, Big Shucker Oyster Bar and Earnest Ice Cream on site.

There will also be kids’ activities, lemonade and a pop-up merch/bottle shop with some Steel & Oak rarities.