Loaded hot dogs, creative salads, and beer: Why this new Vancouver brewery tasting room is like none other

The typical rule in designing food for brewery tasting rooms is to give guests salty, hearty and unfussy fare to keep folks thirsty and soak up the suds. Pizza, pretzels, pepperoni sticks, and pickles - anything to make you pucker and reach for another chilly pint - have been the norm. But Vancouver's newest craft brewery tasting room is bending all those rules with their wildly creative new menu marrying an unlikely match: Loaded gourmet hot dogs and fancy-adjacent salads.

Superflux, which has been a name on the lips of local beer fans for some time, recently opened the doors to their permanent brewing facility which features an open, airy, and modern tasting room. Situated in the former Budget Printing shop location at 505 Clark Drive in the heart of "Yeast Van," this is the first time Superflux has set up its own proper digs, having previously brewed and canned their hazy and hoppy beers with eye-catching packaging as guests at other local facilities.

While Superflux teased fans with their menu of epic hot dogs for take-out only, the brewery has just opened the doors for dine-in, and launched a fresh menu of wildly creative salads crafted by Chef Justin Lee.

A chef with a cult following

Lee, who has a cult following from his time at the stoves at the late, great Crowbar, has come up with a trim selection of salads that seem at once simple and packed with some serious flavour punches. Using locally-sourced produce and ingredients, Lee is plating up creations like the Endive Bolzanese (no, that's not a typo!) which features Belgian endive tossed in a creamy Italian "egg salad" dressing and studded with pickled onion and crispy potato. The Castelfranco Radicchio Nahm Jim is a fiery powerhouse (it made my eyeballs sweat) that matches bitter radicchio with green beans tossed in a potent fermented tomato nahm jim (the Thai dipping sauce) with fried shallots and peanuts. 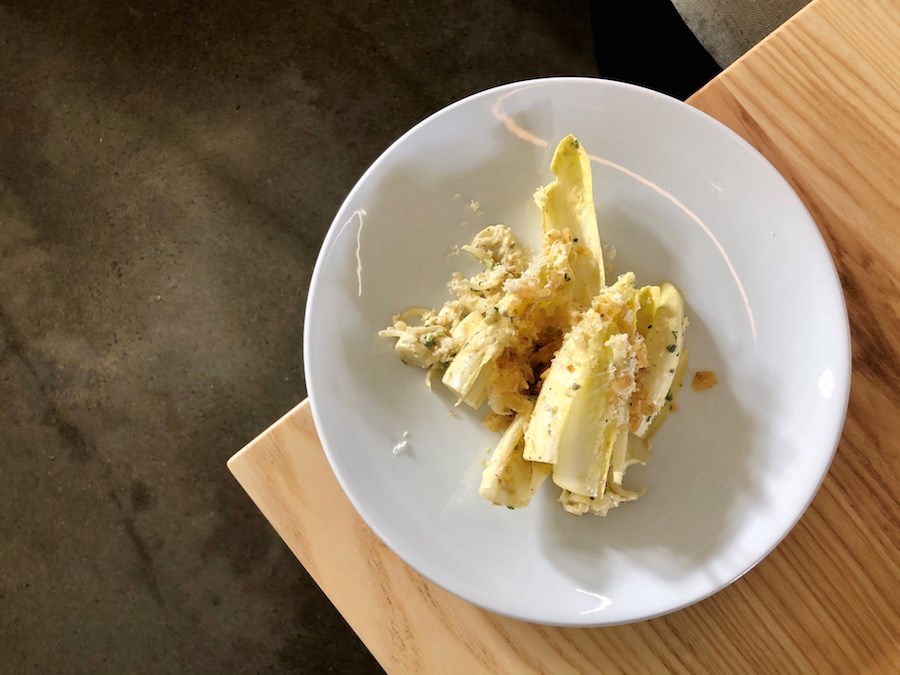 Endive Bolzanese at Superflux. Photo by Lindsay William-Ross/Vancouver Is Awesome

Served with a simple side of salty ripple-cut chips (see: rules for brewery food), the hot dogs are fun takes on flavour combos borrowed from other cuisines, like the sweet, sour, and downright hot notes of the Thai-inspired Spicy Crab or the creamy, meaty, and tomato-y trio nod to the Italian deli of The Mortadella. Veggie options are available, according to the menu.

The big, bright flavours of the salads and hot dogs, which often veer into salty and spicy territory, make perfect sense with beers. According to staff, they are getting comfy with making pairing recs for brews and dishes, like sipping on a Superflux Coconuts with the Nahm Jim salad, for example. The servers know the beer line up well, and can walk you through the menu of nine brews and a cider, explaining what makes their beers a little different and what each terroir of the named hops, like Citra or Vic Secret, bring to the brew party in your glass. Taking a rec from my server I sipped on Colour & Shape, which matched the colour and opacity of my son's clementine-flavoured San Pelligrino, and tasted like a refreshing, hoppy grapefruit juice. 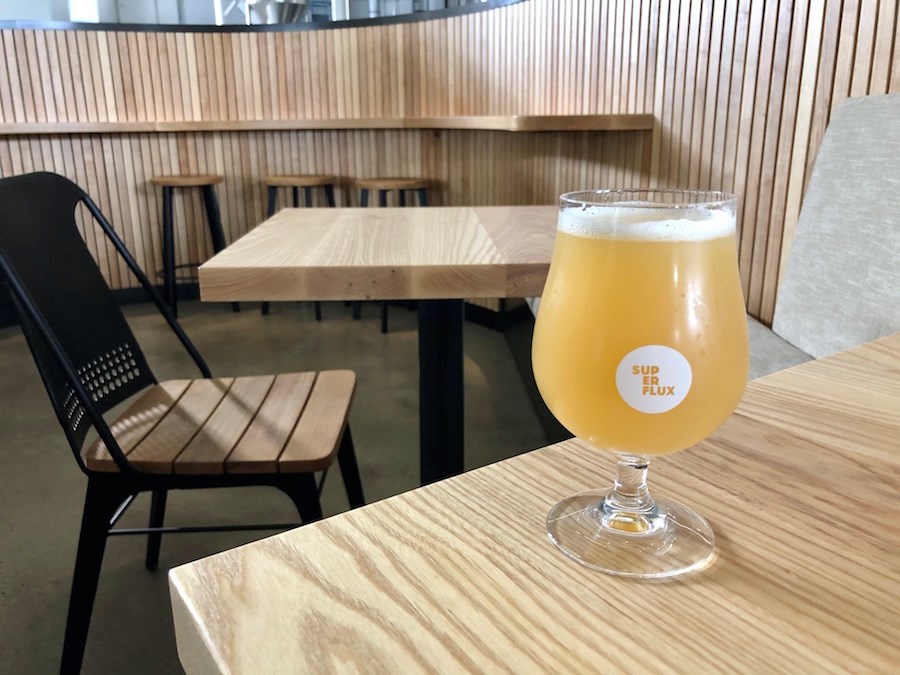 Colour and Shape is one of the beers pouring right now at Superflux's new East Vancouver tasting room. Photo by Lindsay William-Ross/Vancouver Is Awesome

The tasting room at Superflux also puts you basically in the midst of the brewery action; the 65-seat space (now set up with Plexiglass and a reduced capacity of 35-40 guests) fronts the actual brewery, so you can check out the tanks and watch the work of brewing the beers in your glass.

The room was designed and built by Vancouver’s Simcic Uhrich Architects and Harmony Pacific Projects, turning what Superflux co-founders Adam Henderson and Matt Kohlen imagined for their space to reality. The lounge area creates for guests a sense of intimacy in what is actually a significantly open and industrial space; the warm pale wood tables and soft upholstered benches match well with the concrete floor. It's a nice spot to sit down and really enjoy Superflux's beers and its thoughtful and brewery rule-breaking food.

Superflux's winter hours are Wednesday through Sunday, noon to 8 p.m.

A re-opened restaurant, brand new sushi takeout, and a cafe with fresh pasta: Tracking every delicious change in food at one Vancouver hotel
Oct 16, 2020 1:27 PM