There aren't a lot of places in Vancouver like Chupito.

There aren't a lot of places in Vancouver like Chupito.

The just-opened patio project of Gastown's original La Taqueria location is all about regional Mexican share plates and knockout cocktails, and it happens to be located off an alley with a shipping container bar and some serious speakeasy vibes.

With the COVID-era prompting a patio explosion in Vancouver, La Taqueria wanted to make the most of their "around the back" space, which happens to be between old walls that still bear the scars of vintage advertising, foliage, and graffiti past. The ground is covered in loose gravel, and a few umbrellas hover above to keep out the sun, or, the inevitable rain. 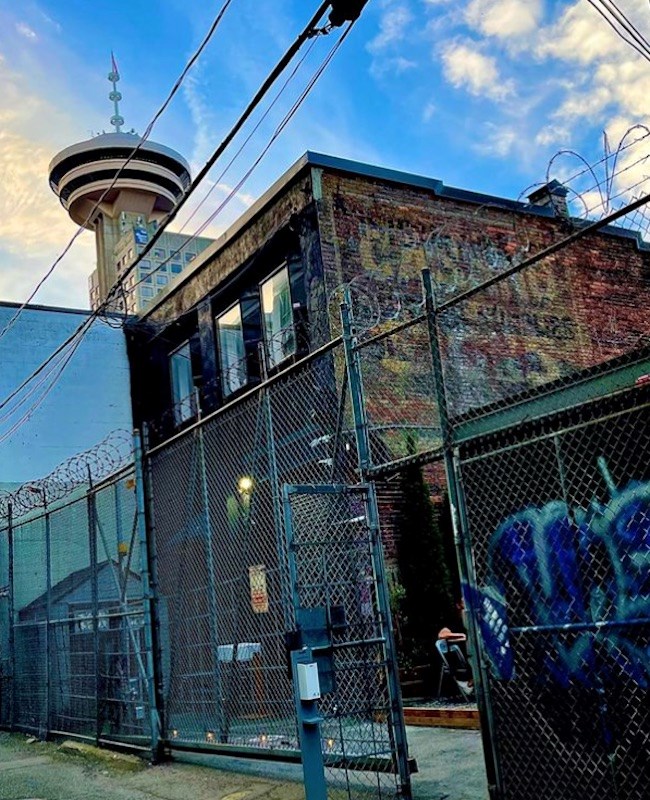 To access Chupito you need to go around back and into the alley behind La Taqueria on West Hastings Street. Photo: Chupito / Instagram

Launched in early June, Chupito is a walk-in only cocktail bar with drinks created in consultation with one of Toronto's favourite top-notch watering holes, Bar Raval, with an emphasis on Mexican flavours, local ingredients, and sustainability. That's how you'll come to find a drink like El Santo, which features coconut oil-washed Herradura Anejo, cascara, rojo vermouth and Campari; it's potent and sips like a bitter-sweet Negroni, and feels like cold liquid velvet going down.

Making the most of what's otherwise bound for the discard pile in the Taqueria kitchen, cocktail components are created out of pineapple rinds from marinades or citrus peels. Sometimes they're using what's growing in a modest container garden right there on the patio. And to keep it local, you'll see labels like Sons of Vancouver on some of the spirits.

To pair with the sophisticated sips are share plates that centre on regional flavours. It's an exciting time in Vancouver to see the collective understanding of Mexican food grow beyond tacos and combo plates, and be open to getting as specific as food with ties to individual states, for example the northwestern state of Sinaloa, which is known for its seafood.

While a first glance at the menu might have you fooled into thinking it's just a few takes on ceviche, the fact is each dish zeroes in on a specific flavour profile, so while the Camaron y Callo Ahogados Estilo Sinaloa has Pacific prawns and Hokkaido scallops bathing in a red and gently spiced liquid made with the traditional Clamato juice, the Aguachile Tatemado de Mariscos also has prawns and scallops with octopus and sweet bits of mango in a boldly spicy liquid that will make your whole mouth tingle.

If you can't take the heat, or you just really want a taco, though, it's okay. Not everything is spicy, like a Tuna Tartare with Asian flavour influence for one. Chupito - which incidentally translates as a little shot of something boozy - also offers the option to order from a limited Taqueria menu. (Get the Tacos Dorados - crunchy golden-fried hard-shell tacos loaded with either a juicy beef birria filling or fluffy potato, topped with crema and a green salsa.)

Chupito, despite being "around back" of Taqueria and in a very Vancouver alley, has proven to be a big draw from the get-go, so if you want to guarantee a seat for a drink and a bite - and your temporary escape to coastal Mexico -  you may want to show up right at 5 p.m. when they open.

Chupito is located at 322 West Hastings Street in Vancouver. Enter from the alley.