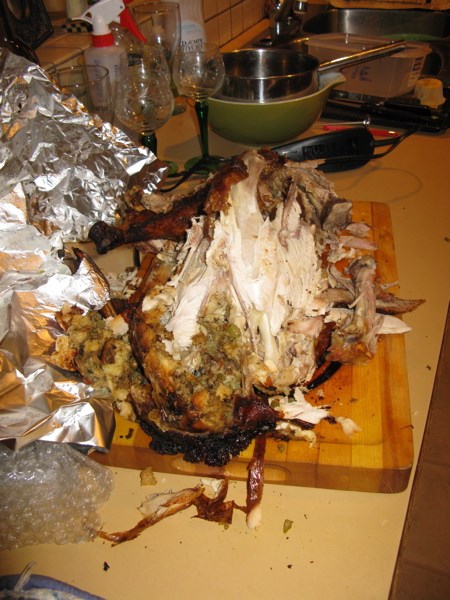 So back when I went to college....yeah..that's right....I went to college...Langara dude....it was a Sunday evening, around this time of year, and I was taking a break from watching Star Trek the Next Generation or something equally as pathetic.  It was around dinner time so of course I pondered the usual 'i live at home' equation of what is the least amount of effort I have to put in to get the best meal possible.  My mom wasn't around so I thought I'd poke around in the fridge.

My mom's a real good cook so she usually can stretch that turkey to the limit...turkey sandwiches, turkey potpie, turkey ala king, turkey soup.  It was a couple weeks past Christmas though so there wasn't too much, but I did find a nondescript yogurt container full of turkey soup.  Cool..I'll eat turkey anything. (insert foreshadowing here.)

I went back to intently watching my show, slurping back my soup, and slowly my focus changed from the show....to the soup.  Hmm...this is kinda thick soup....I thought.  I chalked that up to being a week...or so.. old.  I hate when someone poaches all the good stuff in the soup....cause yeah....no real veggies in here....huh....or actual turkey for that matter...but it tastes like turkey and that's all that counts.

Just as the episode was coming to and end, and I was licking the bowl, my mom came home.

'So you defrosted some?'

Instead of asking the rational question of 'o.k. what the hell did I just eat?'  I took this as a personal attack that I didn't know how to use the microwave correctly and I got the feeling my mom was maybe closing in on 'the equation'.

'I know how to defrost stuff you know...' I snapped back...maybe cause it was on of those real emotional episodes of Startrek or something...maybe it was the turkey....but I was pissy...I was just about to break into a teenage 'why don't you accept me for what I am!??!" rants when I had one of those moments like the end of 'Usual Suspects'.

What really brought it all together was the noises my stomach was making.  Almost like Lassie warning that the house is on fire...my stomach somehow made it very clear to me....that...

What's that smell? You can now get Quarter Pounder scented candles from McDonald's
Feb 20, 2020 12:08 PM
Comments
We welcome your feedback and encourage you to share your thoughts on this story. We ask that you be respectful of others and their points of view, refrain from personal attacks and stay on topic. To learn about our commenting policies and how we moderate, please read our Community Guidelines.