Vancouver restaurants find innovative ways to deliver the goods, and not get gouged by fees

As restaurant owners try to pivot to survive, one common source of frustration is that meal-delivery companies charge up to 30% in commissions
Glen Korstrom Apr 16, 2020 1:18 PM

What happened: The government-mandated shutdown prompted by COVID-19 has forced restaurant owners to innovate to survive. Some have shifted to debut delivery service while dozens of others have launched grocery delivery.

Why this matters: B.C.'s restaurant sector generates around $14 billion in annual sales, employs 180,100 people and is responsible for 5% of B.C.'s gross domestic product, according to Restaurants Canada.

As restaurant owners try to pivot to survive, one common source of frustration is that meal-delivery companies charge up to 30% in commissions. These commissions are charged directly to the restaurant and are before the fees and tips paid by customers are added.

The BC Restaurant and Foodservices Association (BCRFA) has been writing letters to meal-delivery companies, such as SkipTheDishes and Uber Eats, urging them to conform to a 15% maximum commission on meals that would be like the 15% cap that San Francisco on April 10 imposed on these companies. If that campaign does not work, lobbying the provincial government is possible.

DoorDash had already agreed to slash the commissions it charges its restaurant partners by 50%, and BCRFA CEO Ian Tostenson told Business in Vancouver on April 14 that he thinks that this move is sufficient to get DoorDash's commission down to the 15% range.

SkipTheDishes sent BIV a statement saying that it is providing a 25% rebate on its commissions to help local and independent restaurant partners, in addition to other initiatives to support the industry.

"I just talked to a guy yesterday who said he had eight restaurants in suburban areas," Tostenson said. "He said, 'My business is doing well. Take out is going really well, because people want my stuff, but I'm not making any money at all because of the high commissions.'"

One way some restaurants are trying to beat the high commissions is to get listed on a new Vancouver-based restaurant and foodservice portal Breaking Bread.

It lists restaurants and food providers across Canada and the site breaks them down by city, as well as by options, such as take-out, delivery, grocery, meal preparation, wine, frozen items or even if there are promotions for frontline workers.

There is no fee for restaurants to be on the website as it is a pet project that SMC Communications Inc. owner Shelley McArthur Everett has spent tens of thousands of dollars to launch.

The site went live on March 13 and her seven employees have since been updating the portal and conducting outreach to increase the number of restaurants listed.

The project is a pivot from her regular public relations business and she said that given that times are slow in that business, creating the website was a way to keep her staff employed and busy. 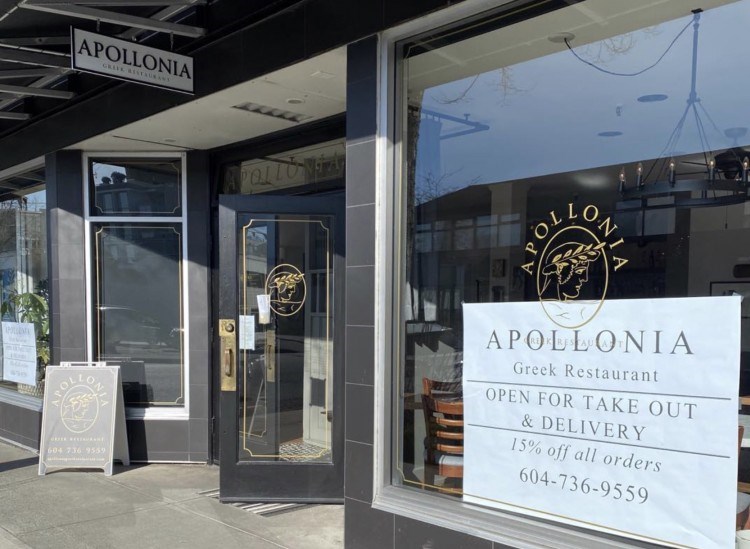 One of the restaurants on the site is Apollonia Greek Restaurant, where owner Poly Alexandris told BIV that her bistro does its own delivery service and that it relies on customers to phone in their orders.

"We don't use meal delivery companies because you have to pay 30%, or whatever it is," she said. "Instead, we are giving the customer a 15% discount."

Alexandris' restaurant suffered a huge drop in sales in mid-March but her initiative to try to personally phone as many past customers as possible to let them know that the restaurant is open has brought in some business.

Being on the Breaking Bread website has also provided a business uptick, she said.

Earls was one of the first out of the gate at launching grocery sales at its stores but it is not listed on Breaking Bread because McArthur Everett wanted to keep the site for small businesses with a maximum of 10 locations.

"We looked at our own supply chain and realized that as a company in the food business for 37 years we have access to ingredients and our customers are looking for this," she said.

Grocery sales at her chain are higher than expected, and are more than 10% of sales – something that may be helped by the fact that large grocers, such as Save-On-Foods, are so busy with grocery delivery that there can be a wait of two weeks to get orders delivered.

Vekteris, Alexandris and other restaurant owners who spoke with BIV said that while overall sales are down, meal-delivery revenue is up significantly.

Yuwa Japanese Cuisine owner Iori Kataoka did not offer any delivery service before the COVID-19 pandemic struck in part because she did not want to pay the commissions to the meal-delivery companies.

She recently started offering delivery service and it now constitutes about 25% of her sales, with the rest being pick-up orders, she said.

Kataoka personally delivers the meals and because she has a Serving It Right certificate, she is also able to deliver alcohol to customers who choose to order wine or sake.

While it may be expected that meal-delivery companies are seeing a bump in business, there was some evidence earlier this week that those ventures may not be making out as well as a lot of people think.

GrubHub (NYSE:GRUB), which has yet to launch operations in Vancouver, on April 13 withdrew its full-year guidance and warned that it would see a decline in sales largely caused by a drop in corporate business.

That requirement forced some restaurant owners to raise prices on their dine-in menu.