Announced in late 2018, Virtuous Pie is finally ready to open the doors to their huge Victoria location - and this outpost features the plant-based pizza chain's first cocktail bar. 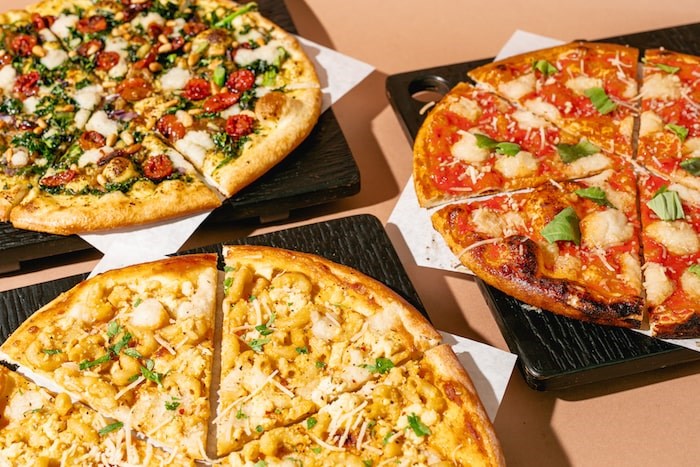 Announced in late 2018, Virtuous Pie is finally ready to open the doors to their huge Victoria location. The newest outpost of the Vancouver-based vegan pizza and Italian-inspired casual eats spot will welcoming guests starting Dec. 14.

Located in downtown Victoria near the Inner Harbour, Virtuous Pie has set up shop in a historic building at 530 Pandora Avenue. The restaurant is situated in prime Victoria real estate in the historic Chinatown area, fronting Theatre Alley and in the Anthem “Union” building. Other retail in the building includes a spin studio and a juice bar. Neighbouring businesses include the seasonal hot spot Kid Sister ice cream shop, Shanzee’s Biscuit Cafe, Swan’s Liquor store, and several other stores.

Virtuous Pie's Victoria location is the largest yet in their multi-city mini-empire, which began with their modest Chinatown shop and also includes their expansive Vancouver location at UBC, as well as locations in Toronto, and Portland, OR. The restaurant is over 2,300 square feet and seats for 61 diners. They'll debut their 653-square-foot patio in the spring of 2020.

New for Virtuous Pie is a bar area and a cocktail menu. The bar will also feature local beer, wine, and cider.

"As this is our biggest restaurant yet, in a city with such a vibrant craft beer and cocktail scene, it made a lot of sense to add a bar program,” says Jim Vesal, Director of Culinary and Business Development, in a media release.

Of course, Virtuous Pie is all about that plant-based pizza life; you'll find that menu in Victoria, starring their calling card creations like the Ultraviolet, Mac & Cheeza, and Stranger Wings. The pizzas will share menu space with their signature small plates and ice creams, plus a bar food menu, too.

Virtuous Pie is located at 530 Pandora Avenue in Victoria. In Vancouver you'll find them at 3339 Shrum Lane (UBC), and 583 Main Street (Chinatown).