You don't have to be a hero to help: Former addict urges youth to help peers steer clear of drugs, homelessness

In our series of stories from a teenager profiling Downtown Eastsiders: A former addict and DTES resident shares his beliefs on just how important it is to help Vancouver's youth from falling into addiction and homelessness.
0
Sep 12, 2018 11:42 AM By: Rachel Way

The purpose of this project is to share the stories of the lives of those living and working in and around Vancouver’s Downtown Eastside, as well as the homeless and marginalized population of Vancouver. By creating a virtual story book, the goal is to end the stigma that surrounds the area and raise awareness to the struggles the people of the area face.

Don: "I've done a lot of good for people, but not for myself." 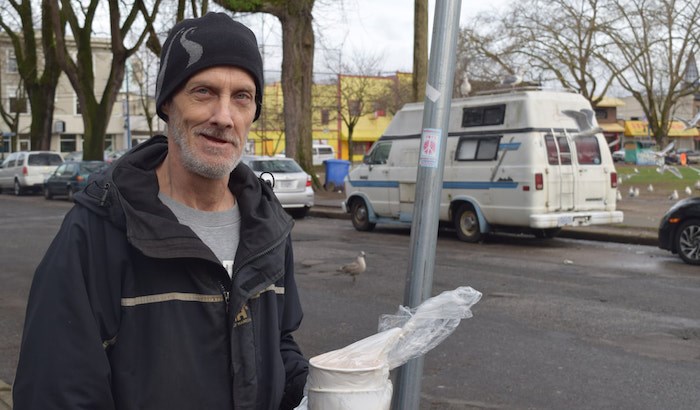 While visiting the Door is Open Soup Kitchen, I had the opportunity to meet the inspiring Don, who I soon learned was a hero amongst the community of the Downtown Eastside. Don and I had quite a lengthy conversation; he was open and willing to share, and I soon learned how inspiring and just how real and authentic Don was.

Don shared with me his beliefs on just how important it was to help the youth on the Downtown Eastside and to stop the ones heading in that direction.

He explained that often the older people are too far gone to help, but the young people are still within reach. When something has happened to them in their childhood, whether it be abuse or neglect, they often turn to drugs to help cope with their pain, but he explains: "It's all fun and games until you get wrapped up in the rut down here, then next thing you know, you're stuck."

"I always tell them," he added, "the novelty wears off and you need to get the hell out of here."

His advice for who should help was a little more specific than the general public. Don calls for youth to step up and help those heading into the direction of homelessness.

"Youth can save youth" he explained. That's because young people relate well to one another.

A young person living on the streets would be much more willing to open up to, and even receive help from, someone younger they can relate to than what he calls "an old guy who reminds them of their nagging parents." He encourages the younger generation to help steer their peers out of this direction and remind them they can amount to so much more. Whether it be volunteering at a soup kitchen or being there for someone you recognize is going through a hard time, you don't have to be a hero to help.

A little kindness can go a long way, much further than you may think. We can all help those living on the streets or heading in that direction whether our actions be big or small, every smile, every muffin, every moment to listen and offer someone to talk to helps.

Don shared with me his amazing and quite heroic stories of getting youth off the streets. In the peak of his own addiction, while dealing with drugs himself, he ran into some young people who he knew could do better than a life on the streets. He spoke to them saying "listen, you think this is all fun and games until your hooked on heroin and working the streets, this is not the life you want for yourself."

He then convinced the dealers of the Downtown Eastside to not deal to these kids, when they couldn't get the drugs, they realized where they heading and redirected their paths from the streets with the help of Don. The kids he tells me, one is now working for the city and the other is a gas fitter. They've since been back to thank him for his help and generosity.

When one commented on how he was still there, his response "What did I tell ya, leave while you can."

Don shared with me that he's done a lot of good for others people but not for himself. That however, I beg to differ with him. In Don's early life he made his fair share of poor decisions, a life of partying led him to a life of addiction and working on the streets. He told me he got hooked on drugs and spiralled out of control. But now, he works and lives in a permanent home. "The drugs don't control me, I control them."

He's got his addiction under control and made a better life for himself, which I think many will agree is a huge accomplishment. Getting over an addiction isn't like getting over a cold, it's a challenge, sometimes the hardest challenge one may face and often people underestimate the power drugs have over people.

When I asked Don what was the most challenging part of his day, his tough-as-nails personality and can-do attitude showed through once more: "What makes my day hard is whatever I make hard," he responded.

Don was an inspiration and taught me the importance of taking matters into your own hands and taking responsibility for your actions. Oftentimes we look to blame everything that's going wrong in our lives on everything but ourselves.

But sometimes we need to be our own advocate in order to be successful, was one of the many lessons I learned from Don.

He left me with one last thing he wanted to share: "It's all choices, all choices."