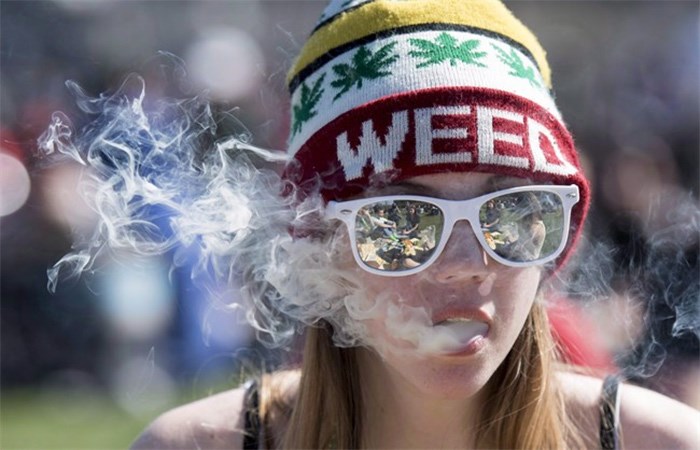 A woman exhales while smoking a joint during the annual 420 marijuana rally on Parliament hill on Wednesday, April 20, 2016 in Ottawa. THE CANADIAN PRESS/Justin Tang

City administrators in Calgary are recommending councillors adopt a ban on public consumption of cannabis when pot becomes legal later this year.

A report that is to be debated this week says a new bylaw should restrict all forms of cannabis consumption in public places, or in areas where the public has consent to enter.

Exceptions would be made for people with medical marijuana licences, as well as for festivals where people could consume cannabis in areas similar to beer gardens.

"The effects of cannabis on a person can vary depending on the individual and the strain and potency of the cannabis being consumed," says a document that explains the reason for the recommendation.

"For many it can have relaxing, positive effects, but it can also alter one's state of consciousness and induce anxiety and panic attacks."

The idea isn't being welcomed by Keith Fagin of the cannabis advocacy group Calgary420. He says cannabis users deserve somewhere public where they can gather to smoke, vape or eat the drug.

"It's just not something that's going to be a public safety issue whatsoever," he says.

The city report says the recommendation follows public consultation, including telephone surveys which found a majority of Calgarians would prefer cannabis consumption rules to mirror those for drinking alcohol in public places.

"We're called the Texas of the North and for good reason. We're super-strongly conservative here and ... we're more hard-nosed and hard-headed about things like that."

Lawyer and marijuana advocate Kirk Tousaw says the proposed exemption for medical consumption is key to whether a public ban would be legal. But he disputes that rules for cannabis consumption need to be the same as those for booze.

"Cannabis doesn't tend to do that. If anything, it sometimes makes you a little more introverted because of the potential anxiety-producing effects of THC."

Earlier this month, the Montreal suburb of Hampstead adopted a bylaw that bans all smoking in public places. It prohibits tobacco and marijuana on municipal property, including sidewalks and streets.

The bylaw does not prohibit electronic cigarettes

Fagin says if condo and apartment buildings also ban smoking and vaping cannabis, that could mean users wouldn't be able to step outside for a puff. Edibles would be an option when they become legal later, he suggests, but they take time to work and have different effects.

The odour from vaping cannabis is much less noticeable than cigarette smoke, says Fagin, who feels users and non-users should still be able to get along.

"If you are a cannabis consumer or considering consuming cannabis, be a responsible adult about it and not go out in public and blow smoke in people's faces."

Multiple arrests after skirmish between VPD and crowd in the Downtown Eastside
Aug 9, 2022 4:58 PM