Brendan Leipsic stars in overtime as Canucks down Islanders 4-3 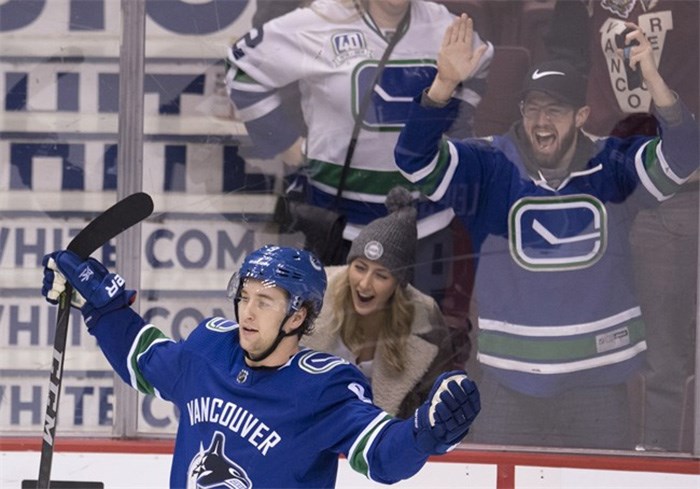 It wasn't the ending anyone wanted to see in a marquee showdown between Calder trophy contenders Brock Boeser and Mathew Barzal.

Boeser, the rookie Vancouver forward who leads his team offensively, laid facedown on the ice in the final seconds of regulation in what would be a 4-3 Canucks overtime victory against the New York Islanders on Monday.

After falling awkwardly into the boards and possibly hitting an open gate of the Vancouver bench, Boeser was helped to the locker-room and taken to hospital for pre-cautionary reasons. Canucks head coach Travis Green sounded optimistic after the game.

"You are always concerned no matter what when a player is injured," said Green. "I don't want to make a comment on it. I hope he's all right. I think our guys feel like it's a bruise."

Leipsic's OT heroics made up for his three trips to the penalty box, including a slashing penalty in the final minutes that led to the Islanders tying the game 3-3.

"It was nice for Leipsic to get a goal after taking a couple penalties. He owed me that one," said Canucks goalie Jacob Markstrom, who stopped 31 shots.

"I could have been better," said Leipsic. "To be able to help my team out in the end was a plus."

Josh Bailey, John Tavares and Jordan Eberle scored for New York (29-29-9), which lost a season-worst seventh straight game. The Islanders, four points behind Columbus for the second wild card in the East, know they need to turn it around in a hurry.

"It's getting old," said frustrated head coach Doug Weight. "We should have won the game."

"We've just got to find a way, a full 60 minutes to finish one out," added Tavares. "We just haven't seemed to finish games off. Whatever that is, whether it's mental or just execution of a few plays, we've just got to find a way to do it. No one's going to feel sorry for us or change the outcome. Obviously, this isn't a whole lot of fun right now."

After Bailey's opening goal, Tavares lasered a stunningly accurate shot from the bottom of the face-off circle to make it 2-0. The goal came on a beauty touch pass from Thomas Hickey through his legs after getting the puck from Barzal.

Leipsic scored his first of the game, and first as a Canuck, after taking a pass from Virtanen near the net at 14:25. Archibald tied the game and sent the crowd into a frenzy when he converted a penalty shot by wristing it over Halak's stick.

"I used my only move in the bag of tricks," said Archibald.

Vancouver pulled ahead with nine minutes to go in the third. An Islanders turnover sprung Leipsic with Virtanen trailing him on a 2-on-1. Virtanen went five-hole for a rare goal in front of the home crowd.

"My first (goal) at home in two years apparently," said Virtanen. "Definitely nice to get that one."

Eberle scored to force overtime with Leipsic off for slashing. He swatted in a rebound to tie the game 3-3.

Jaroslav Halak made 19 saves for the Isle.