One of the oldest corner stores in Vancouver is on the path to being restored and re-opened.

Cardero Grocery, as it eventually became known, served as a West End grocer and convenience store for over a century by the time it closed in 2017.

Built in 1902, its adjacent property, the Fleming Residence, was built in 1908. The Vancouver Heritage Foundation's Heritage Site Finder indicates that the building was "first listed in 1903, with Kate Fleming Grocery as the occupant."

Cardero Grocery "was one of the first buildings on Cardero Street and one of four grocery stores west of Burrard," at the time, according to the West End BIA.

Now the buildings at 1074-1078 Cardero Street are destined for renewal, and re-launch.

An application was submitted to the Vancouver Heritage Commission, and was on the agenda for their Monday, July 13 meeting.

The proposal is to "retain and rehabilitate the Cardero Grocery and the Fleming Residence."

"They are both valued for their Edwardian-era features, their role in the development of the West End, and their association with early businesswoman, Kate Fleming," reads the item.

The proposal, submitted by Vancouver's SHAPE Architecture and Donald Luxton & Associates,  calls for the construction of an addition across the back side of both buildings, which would require scooting the existing buildings up closer to the front property line, and relocating the Fleming Residence entry staircase as an inset on the front porch. 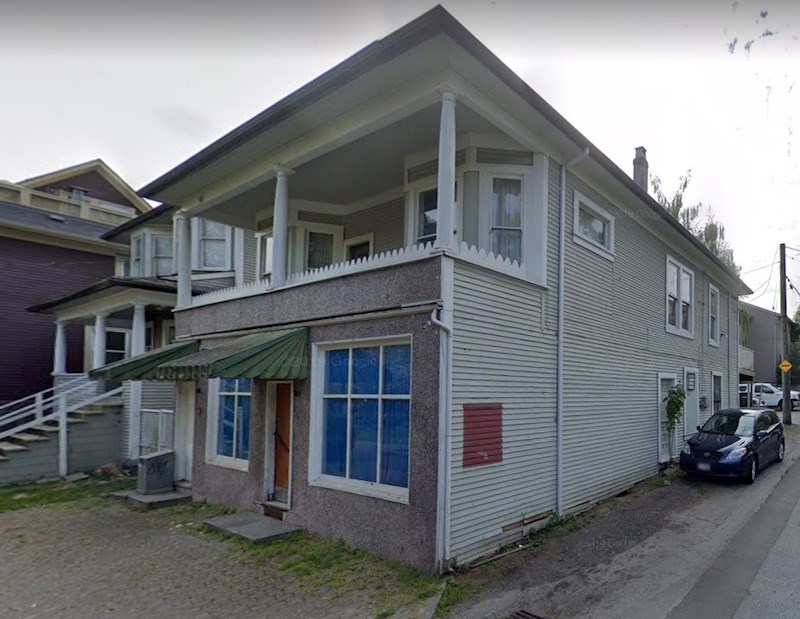 Cardero Grocery as seen in May 2019. Photo: Google Maps

A unique property feature is that the building is fronted by a pedestrian plaza and bike lane, rather than a roadway. The building also faces the playground of Lord Roberts Elementary School.

The renovations would have a double purpose: They will create five rental housing units at the site, and allow for the Cardero Grocery building to house a grocery store.

"The heritage buildings will receive long-term protection through a Restoration Covenant that will both ensure the restoration strategy for both buildings and also require issuance of a Heritage Alterations Permit for any changes to the exterior. This Covenant will be registered on title in perpetuity," notes the agenda.

A popular subject for photographers and artists, there was a public outpouring of support and sadness when the business revealed in late 2017 the land had been purchased and Cardero Grocery's lease would not be renewed. The last lease-holder was Emma Ng, who took over the Cardero Grocery business in 2003.