The city continues to see the most expensive rent in Canada.

While the price of a one-bedroom apartment in Vancouver has decreased again this month, the city remains the most expensive in Canada for renters.

Conducted by Padmapper.ca, the March report analyzes rental data from hundreds of thousands of active listings across the country. From there, listings are aggregated every month to calculate median asking rents for the top 24 most populous metropolitan areas.

While one-bedroom rentals dropped in price this month over last in Vancouver by 2.1 per cent to $1, 900, two-bedrooms remained flat at $2,630.

"Meanwhile, rents in the rest of the country seem to have stabilized as the earlier pandemic months of nationwide double-digit year-over-year declines have passed and are now only concentrated in the top 2 most expensive markets," notes Padmapper.

Burnaby continues to be the third-priciest city to rent a one-bedroom in Canada. However, one-bedroom rent dropped 1.2 per cent to $1,660 this month, while two-bedrooms grew 0.5% to $2,200.

Victoria is now the fourth most expensive city for a one-bedroom apartment, with rent increasing 1.9 per cent to $1,600 this month; two-bedroom rent also increased by 0.5% to $2,000.

Barrie in Ontario dropped down a spot to rank the country's fifth priciest city to rent in. One-bedroom rent decreased by 4.8% dip to $1,570. Two-bedrooms had an even more drastic decline, decreasing 5.1 per cent to $1,690.

In Abbotsford, one-bedroom rent experienced the largest monthly growth rate in the nation, jumping 4.8 per cent to settle at $1,310. 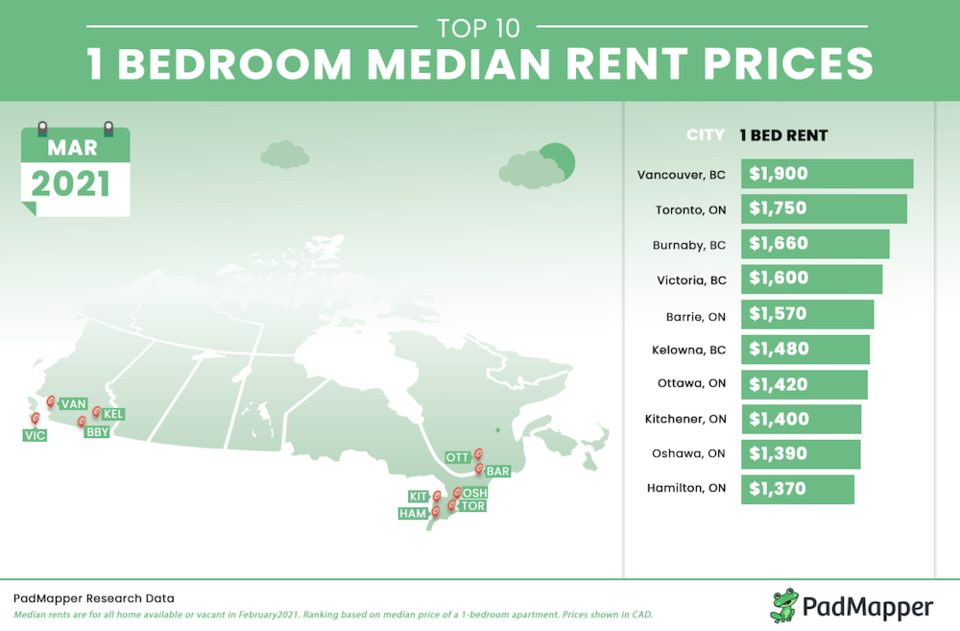