At least one Richmond resident may finally get a decent night sleep now that the owner of a busy, illegal hotel next door to her has been fined $2,000 by the City of Richmond and told to close shop.
Daisy Xiong
Aug 23, 2018 6:17 AM

At least one Richmond resident may finally get a decent night sleep now that the owner of a busy, illegal hotel next door to her has been fined $2,000 by the City of Richmond and told to close shop.

The Richmond News received a news tip earlier last week from a frustrated neighbour near Railway Avenue and Blundell Road, who said a house next door was listed as a hotel on various travel websites. 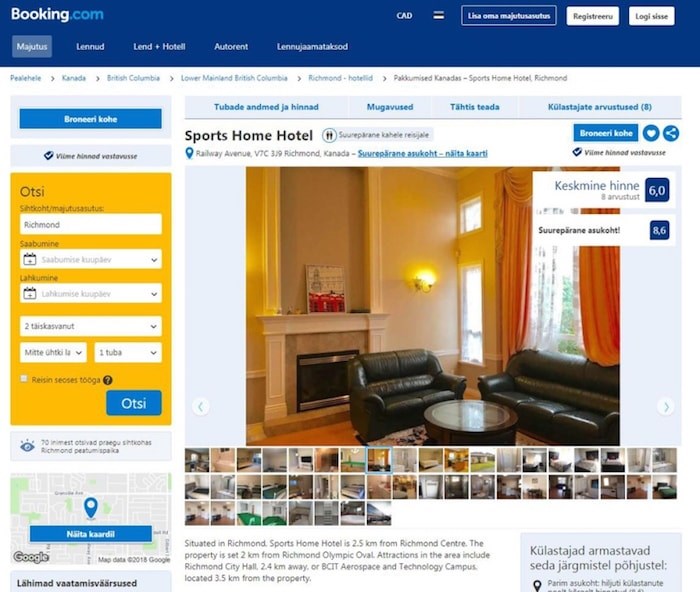 The house at 7508 Railway Avenue was operating as an illegal hotel, according to the City of Richmond.

“It is very popular. So many cars are in and out every day, taking all the street parking, and some even parked on my driveway. At midnight, I can hear people talking very loudly, it’s so annoying,” Joyce Wang told the News.

The house at 7508 Railway Avenue is listed as a “Sports Home Hotel” on travel booking websites such as Booking.com, BedandBreakfast.eu and Agoda, which all cater to European travellers.

The posts show that the “hotel” has four different room types and can accommodate two to four guests in each room, with prices from $120 per night.

However, the property is not a licensed bed and breakfast, according to the city.

Wang said the operator never hid the fact that the hotel is illegal, and told Wang she is “not scared.”

“The owner bought this house in 2015 but never moved in. Some friends of the owner then rented the place and started operating it as a hotel and the traffic suddenly increased hugely this summer,” said Wang.

“When I went to talk to the operator and said I will report her, she said she is not scared, because no one is going to fine her. She even encouraged me to operate a hotel in my house.”

Since the operator doesn’t live there, very often the house is unsupervised and guests can access it through a keypad on the entrance door, according to Wang.

“I don’t feel safe with so many strangers coming and going in the neighbourhood. Once I was in my garden and saw topless people standing on the balcony of the house looking down at me. I was so scared,” said Huang.

“You can rent it out to anyone you’d like, but just not a hotel, please.”

This is not the first time the city has been made aware of an illegal operation on this property.

This house at 7508 Railway Avenue was operating as an illegal hotel, according to the City of Richmond. Google Streetview image

“We have issued the operator a warning letter previously and issued two tickets” last week “for continued non-compliance with our bylaws,” said city spokesperson Ted Townsend.

According to the city’s bylaw, fines related to short-term residential rentals are $1,000 per offence.

Posts for the “hotel” are currently still available on those travel booking websites, but all dates are shown as “unavailable.”

Even if the operator applies for a business permit for a bed and breakfast, the house does not meet the requirements.

A B&B must be operated by the property owner, or the owner’s spouse or child, who uses the property as their principal residence. In addition, up to three rooms can be rented at the same time with a maximum of two guests per room, according to the city.

Townsend said city staff primarily learn about illegal bed and breakfast operations through complaints from neighbours or others. To report an illegal hotel, call 604-276-4345.