Is the Strathcona Park homeless camp in Vancouver here to stay?

Any of you who happen to live near Strathcona Park or have recently gone by its growing homeless encampment have likely concluded the people living in the tents are not going anywhere anytime soon.

In fact, the B.C. government says so.

Maybe not in so many words, but when I tried several times last week to understand why Minister of Public Safety and Solicitor General Mike Farnworth has not taken the same action he did with the Oppenheimer Park tent city — which was to clear it — I didn’t get an answer.

What I received instead was an emailed statement from Emergency Management B.C. that said this:

• “The Provincial Health Officer has released a set of guidelines to aid camp organizers and local governments in responding to the COVID-19 health risks for people living in encampments. At this time, the expectation is that these guidelines are implemented where possible to limit key points of contact.”

• “B.C. Housing and its community partners are actively assisting with outreach efforts for people who are experiencing homelessness in Vancouver, including at Strathcona Park, and ensuring that people have access to available supports and services as they wait to find a more permanent housing solution.”

Not exactly the same urgency we heard back in April when the B.C. government rolled out an ambitious and unprecedented plan to move close to 700 homeless people out of Oppenheimer and two camps in Victoria into hotels, motels and community centres.

This is what Farnworth said then: “We are at the confluence of two of the most challenging health emergencies [coronavirus and overdose deaths] our province has ever faced, and we cannot leave our most vulnerable behind. The time to act is now.”

Farnworth emphasized the ministerial order under the Emergency Program Act to clear the camps was “a public safety order, not a health order.”

The plan proved successful, according to another statement I received last week from Shane Simpson, the Minister of Social Development and Poverty Reduction.

In fact, Simpson said that since the pandemic began, the B.C. government and its housing arm — B.C. Housing — along with the City of Vancouver, Vancouver Coastal Health and non-profit housing providers secured almost 700 spaces in Vancouver for people in temporary accommodations.

The government also bought the Howard Johnson hotel on Granville Street, the Buchan Hotel on Haro Street and The American Hotel on Main Street as part of its plans to provide more housing for people.

For Oppenheimer specifically, 261 people moved into some form of temporary housing, including the Howard Johnson and Holiday Inn in downtown Vancouver. 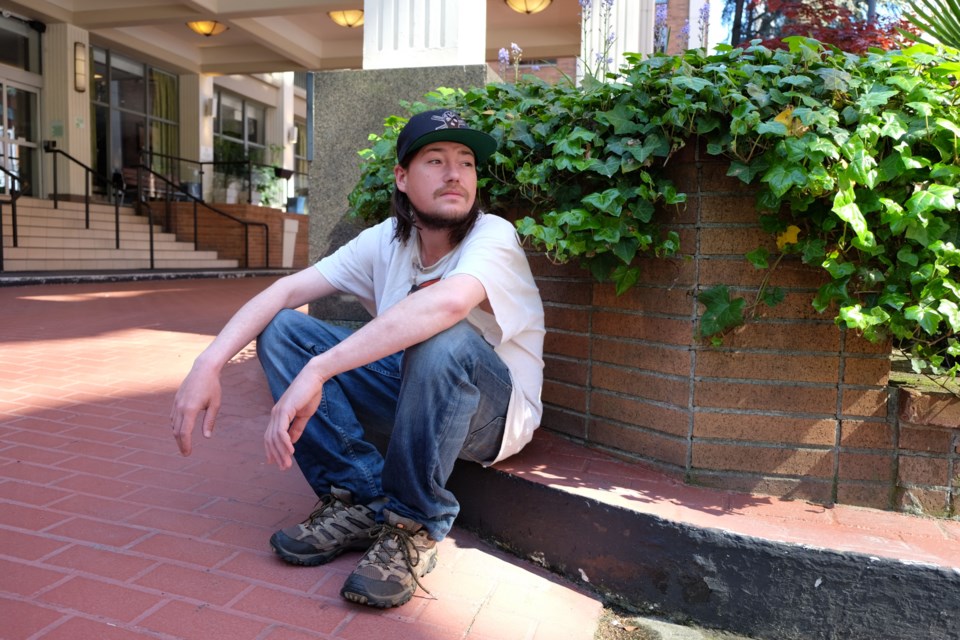 Tylor Lovell was living in Oppenheimer Park until he was moved to a downtown hotel. File photo Mike Howell
Regular readers will recall a tent city then popped up in a parking lot at CRAB Park, only to be cleared by police after the Port Authority successfully obtained an injunction.

Then along came the Strathcona encampment.

The park board has no plans to seek an injunction to clear campers from Strathcona Park, where Mayor Kennedy Stewart told me last week had grown to 260 people — almost the same number of people moved from Oppenheimer.

The solution suggested from both the campers — some of whom include activists with homes — and Strathcona residents who continue to complain about crime and their safety is unsurprising: more housing.

Simpson, the mayor, park board Comm. John Coupar and a statement from the park board all made that clear to me last week, as anyone studying this issue, or simply going for a walk in their neighbourhood, has concluded for decades.

But it appears there isn’t enough housing right now — permanent or temporary — to accommodate another 260 people, let alone the hundreds of others living without a home in Vancouver.

The most recent homeless count conducted in March showed there were 2,095 people in Vancouver who were either living in some form of shelter, or on the street, including those residing in recreational vehicles and cars, which there are many at the edge of Strathcona Park.

The finger, as it has been for decades, continues to be pointed at the feds, who according to the mayor aren’t following through on their $40-billion, 10-year national housing strategy announced in November 2017 to reduce chronic homelessness by 50 per cent in Canada.

Simpson also pointed his finger at the feds.

“We are calling on the federal government to join us in this work with funding to help us get more people safely and securely housed so that they can access the supports they need,” he said.

So what’s being done in the meantime?

A couple of weeks ago, I wrote a piece that posed the question whether it was time for a sanctioned homeless camp in the city. That question was based on suggestions I heard from residents who addressed the park board related to a revised bylaw concerning homelessness.

After reviewing the emails I received last week from the park board and the B.C. government, along with my notes from interviews with the mayor and Coupar, it appears the Strathcona encampment has become or is on its way to becoming a quasi-sanctioned site.

• B.C. Housing is funding the PHS Community Services Society to support people in the park.

• A handwashing station with a clean water drinking supply has been installed.

• Staff has added more garbage totes and increased the frequency of garbage pick-up.

• The Heatley Clinic Outreach attends the park and takes on campers as primary care clients. The same clinic also provides an overdose outreach team for safe supply and health follow-up.

• The PHS mobile needle exchange regularly attends the park to pick up and drop off harm reduction supplies, including needles.

• B.C. Housing is working with Carnegie Outreach to connect residents with additional supports that best fit their needs.

• B.C. Housing is supporting the Indigenous leadership in facilitating ceremony, celebrations of life and referring to appropriate community programs as they re-open.

• A community tent has also been installed on the northeast side of the camp to provide additional Indigenous supports.

Coun. Pete Fry, who lives in Strathcona and was recently threatened on a sidewalk by a man saying he would stab him, outlined some of those concerns last month in addressing park board commissioners.

“There have been trip-line booby traps, bear bangers shot at park users, threats with weapons, swarmings, verbal accosting and physical assaults directly as a result of the encampment,” Fry said.

As for Oppenheimer Park, it remains fenced in, with crews continuing to fix up the two-acre piece of land that served as an encampment for more than a year. It was the site of another tent city in 2014 before the then-park board successfully sought an injunction to clear the park.

Strathcona Park is several times bigger, with plenty of room to grow.

What becomes of its new inhabitants remains entirely up to politicians, many of whom are out of fresh talking points and excuses, and continue to state the obvious — that a warm bed and a roof over that bed, along with good food and access to health care, improves a person’s physical and mental health.

Which can be translated to this: good luck campers and good luck Strathcona residents in the days, weeks, maybe months, maybe years ahead while politicians with power and access to big dollars dither over what to do about your concerns, complaints and needs.