Nicholson Road is part of an ongoing photo project aimed at sharing and celebrating the different communities in Metro Vancouver.
Robert White Jun 27, 2011 11:37 AM 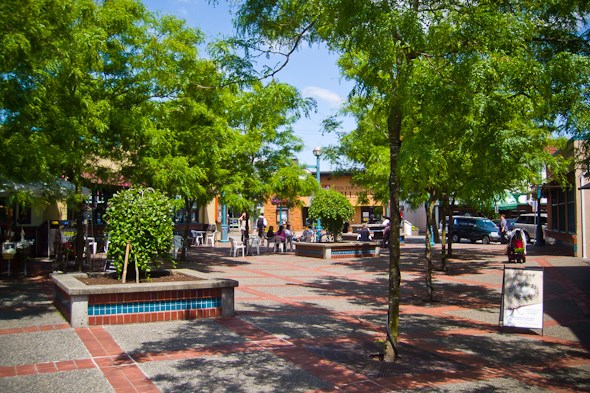 Believe it or not, when some of my friends from Langley City say they're going downtown, they really mean downtown Langley. I think that's sort of neat, cause downtown Langley is another one of those awesome, small-town areas in the Metro. Fraser Highway becomes a one-way road, with restaurants and mom n pop stores lining the route. Then you come across a couple alleyways, one of them being McBurney Lane which has become the focal point of a revitalized downtown district.

As far as I've been able to gather, the site used to be the home of the Oddfellows Hall, which burned down a couple decades ago. While planning to construct a road through the newly vacated lot to connect Fraser Highway with Park Avenue, the area became a small haven from the surrounding streets and parking lots, and around 1996 evolved into the public plaza it is today. Outside of being a great spot to relax and grab a cup of coffee, it's also been used for countless small-scale public events, and even the set of a few film scenes here and there. The name McBurney is a dedication to Dr. Albert McBurney, "for his care and attention to the citizens of Langley."

In no time, the plaza may soon extend another block, creating a great public link between the downtown district and Douglas Park. Pedestrians for the win!