sim Ken Sim won 977 out of 1,960 votes cast Sunday at the Hellenic community centre to win the NPA’s leadership race. John Coupar was the first to congratulate him. 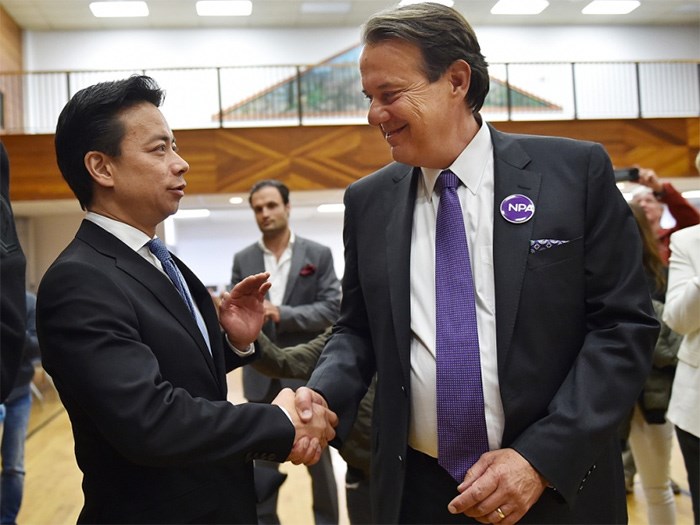 sim Ken Sim won 977 out of 1,960 votes cast Sunday at the Hellenic community centre to win the NPA’s leadership race. John Coupar was the first to congratulate him. Photo Dan Toulgoet

A relatively unknown mayoral nominee who co-founded a seniors' home care service and a bagel business is now in charge of delivering a result the Non-Partisan Association has failed to achieve since 2005: Win a majority at city hall.

Ken Sim, 47, who described himself as a "change agent," won his party’s mayoral nomination contest Sunday after defeating park board commissioner John Coupar and self-described financial analyst Glen Chernen. Sim won 977 votes to 602 for Coupar and 379 for Chernen.

“Wow, I wasn't expecting that," said Sim, moments after he was announced as the winner at the Hellenic community centre on Arbutus Street. “This is truly humbling."

Leading up to Sunday, it appeared Coupar had the edge because of his profile as a park board commissioner and support of caucus colleagues, NPA Coun. George Affleck and longtime party stalwarts Suzanne Anton (former attorney general) and Philip Owen (former mayor).

Sim, who was the last of the three candidates to enter the race, told reporters he attributed his support to "a great network of friends" who have known the born-and-raised Vancouverite for up to 40 years.

Those supporters included former party president Peter Armstrong of Rocky Mountaineer and Chip Wilson of Lululemon fame. Sim, an accountant and former investment banker, is a co-founder of Nurse Next Door and Rosemary Rocksalt Bagels.

"So when we put the call out, we had a lot of support from across the city—people wanting to help out, and get the word out," Sim said.

Though his victory could be viewed by some in the NPA as simply a numbers game, Sim emphasized in a speech earlier in the night, and in an interview with the Courier last week, that his business background was a factor in his appeal to members.

“We need to look at things differently and I'm a change agent," he told a crowd of about 250 people Sunday, noting his seniors' home care service "changed the way North Americans view health care." "We need a leader who actually has a track record of success in changing things. We need a leader who can not only unite the NPA, but unite the city."

Sim’s victory immediately changes the tone of the party’s campaign from one of controversy and infighting to one that is now expected to be on a predictable stay-the-course path to the election Oct. 20.

Coupar, who was the first to congratulate Sim on his victory, was the only candidate in speeches to members to mention the drama that has played out this year in the party.

"As you all know, the NPA has had a tumultuous few months, but it's time for us as a party and all of you great people here to look forward and think about the city's future, about our future and our future together," Coupar said.

Over the last two months, the party has been in turmoil after NPA Hector Bremner, one of the favourites to lead the party, was dumped by the party’s board as a potential mayoral nominee.

Now Bremner is preparing to launch his own party as early as this week and plans to compete, or possibly be acclaimed, as its mayoral candidate, setting up an interesting race on the centre-right of the political spectrum.

It's a move that would likely nullify any attempts from Sim to welcome back Bremner to a party whose profile got a big boost in last fall's byelection with his election to council.

"Right now, we're just celebrating this win, but like I said we are very inclusive and it's a new day at the NPA," he said, when asked about reaching out to Bremner.

Sim, who lives in Arbutus Ridge with his wife and four children, created a website for his campaign but it is short on specifics, although he has called for a review of the city's finances and breaking the "building permit logjam" at city hall to increase the supply of housing.

Housing and how to make it more affordable is expected to dominate campaigns this election season and Sim said specifics on his plan will be rolled out in the next few months.

On his website, he said his single biggest priority is "attainable housing for Vancouverites to rent and buy" and he wants "creative zoning bylaws [to] give our children better opportunities to live close to home."

He has also promised to be "the most business friendly mayor in the history of Vancouver."

Chernen, who graduated from Churchill Secondary with Sim, along with NPA president Gregory Baker, made no mention of the controversy related to Bremner in his speech, although he did answer critics characterizing him as a disrupter, saying that if "your house is being robbed by pirates, then you sure as heck need a disrupter."

It wasn't clear whether his quote was in reference to the ouster of Bremner or what has been his raison d’etre since surfacing in 2014 as a co-founder of the fringe Cedar Party: Alleged mismanagement at city hall led by Robertson.

"I know exactly what the mayor has been up to, and I know how to fix it," said Chernen, who has brought a series of failed lawsuits against Robertson and the city related to alleged conflict-of-interest and questionable land deals. "Everything I did was for the good of the community and now it's your chance to have me listen to you and have me represent while I lead as mayor of this city."

Chernen said after the results that he was happy for Sim and expected to be an advisor on his campaign.

"Together, we can take the city back," Chernen said after hugging his former school mate.

Sim, who has never run for public office, will face a growing list of confirmed and possible mayoral candidates, including independents Shauna Sylvester of Simon Fraser University’s Centre for Dialogue and Kennedy Stewart, the NDP MP for Burnaby-South.

Ian Campbell, a hereditary chief with the Squamish Nation, is expected to be acclaimed as Vision Vancouver’s mayoral candidate after competitor Taleeb Noormohamed pulled out of the race last week for health reasons; he suffered a “sudden cardiac event.”

Former Conservative MP Wai Young appears to making a run with an organization called Coalition Vancouver, although she has not returned repeated requests from the Courier to confirm her intentions.

In this year's race, Sim will try to do what three previous NPA mayoral candidates—Kirk LaPointe in 2014, Suzanne Anton in 2011 and Peter Ladner in 2008—failed to do, and that is return an NPA majority to city hall; Sam Sullivan won a majority in 2005 after defeating Vision's mayoral candidate, the late Jim Green.

But unlike his predecessors, Sim will not have to compete against Robertson, who will end a 10-year run this fall when he retires. Vision will also be without several of its longtime councillors in this campaign, with only Raymond Louie and Heather Deal seeking re-election.

Those factors coupled with legislation brought in by the provincial government last fall to ban union and corporate donations, and setting limits of $1,200 per individual contribution, will also play out in the campaign.