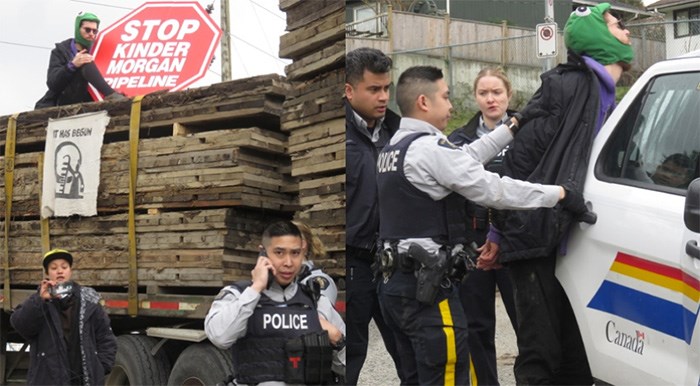 A pipeline protester who jumped atop a loaded semi-trailer headed into the Kinder Morgan tank farm Monday was arrested and faces mischief charges. Photograph contributed

A pipeline protester was arrested Monday and faces charges of mischief after jumping onto a loaded semi-trailer headed into the Kinder Morgan tank farm and then evading police by running along the top of it.

Police were called to the area just outside the tank farm gates in the 7000 block of Bayview Drive at about noon, after reports someone had jumped on top of a work vehicle, according to police.

“Despite attempts by Burnaby RCMP officers to have the male come down, he refused to do so,” states an RCMP press release. “The male then proceeded to attempt to evade officers by running along the bed of the fully loaded semi-truck, placing both himself and responding police officers at risk of serious injury.”

The 25-year-old was finally arrested and taken down safely from the truck, according to police.

He now faces a potential charge of mischief.

A major protest against the proposed twinning of Kinder Morgan’s Trans Mountain pipeline, which carries diluted bitumen from Alberta’s oil sands to Burnaby, is planned for March 10.

“Demonstrators have a right to lawful, peaceful and safe protest and companies have a right to complete their work,” states the press release after Monday’s incident. “Burnaby RCMP is working hard to ensure that both of these rights are protected and that all parties and the public are kept safe.”