An award-winning actor, an Indigenous leader and an internationally renowned sociolinguist will all receive honorary degrees from the UBC at next month’s fall convocation ceremony.
Oct 30, 2018 10:53 AM By: Vancouver Courier 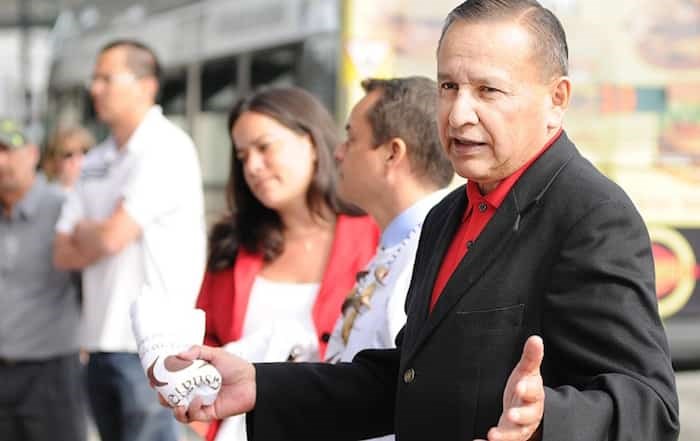 Grand Chief Stewart Phillip, president of the Union of British Columbia Indian Chiefs, will receive an honorary Doctor of Laws degree from the University of B.C. next month, along with actor Kim Cattrall and Peter Trudgill, a sociolinguist. Photo Dan Toulgoet

An award-winning actor, an Indigenous leader and an internationally renowned sociolinguist will all receive honorary degrees from the University of B.C. at next month’s fall convocation ceremony.

Grand Chief Stewart Phillip, president of the Union of British Columbia Indian Chiefs, and actress Kim Cattrall, star of Sex and the City, producer and author, will both receive Doctor of Laws degrees on Nov. 28. Peter Trudgill, a sociolinguist, will receive a Doctor of Letters degree on Nov. 30.

“I’m delighted to welcome Dr. Trudgill, Grand Chief Phillip and Ms. Cattrall to UBC,” president and vice-chancellor Santa Ono said in a press release. “The bestowal of an honorary degree recognizes substantial contributions to society and all our fall recipients have spent their lives making such contributions.”

The university’s fall congregation is set for Nov. 28 to 30. A total of 3,000 students will receive degrees during eight ceremonies over three days.

Phillip is also chair of the Okanagan Nation Alliance and has taken an active role in defending Aboriginal Title and Rights by supporting First Nations communities in need. He has been involved in numerous protests and lobbying movements at provincial and national levels.

In 2006, the Okanagan Nation, led by the Elders of the Penticton Indian Band, acknowledged his lifetime commitment to the defence of Indigenous Peoples’ Title and Rights by bestowing on him and his family the rare honour of the title of Grand Chief.

An actor, producer and author, Cattrall has turned her artistic achievements into opportunities for activism on social issues around gender, sexuality and identity.

Trudgill is an internationally renowned sociolinguist, the study of the effect of all aspects of society on how language is used. Before holding numerous teaching positions at universities worldwide, Trudgill studied modern languages at King’s College, Cambridge and then obtained a PhD from the University of Edinburgh. He is currently serving as adjunct professor for sociolinguistics at University of Agder in Norway and adjunct professor in the Research Centre for Linguistic Typoloy at La Trobe University in Melbourne, Australia.

Earlier this month, UBC and Simon Fraser University bestowed honorary degrees on the Aga Khan, the hereditary spiritual leader, at a special ceremony at the Vancouver Convention Centre.