Mike Howell
Dec 1, 2020 7:53 PM
The chairperson of the Vancouver Library Board wants city council to invest $625,000 in the library service’s 2021 operating budget to offset a proposed elimination next year of overdue fines affecting thousands of patrons.

Jennifer Chan told council Tuesday that an estimated 70,000 library cardholders — many of whom live in low-income neighbourhoods — are blocked from accessing the city’s library system because they failed to pay a fine of $10 or more.

“Our staff hear these heart-wrenching stories too often when that small error of returning an item late and [subsequent] fine keeps library services from those who need them most,” Chan said.

Chan’s plea came after council heard earlier in the day from the city’s chief librarian, Christina de Castell, who provided “stark findings” that further expose the inequity in Vancouver related to race and poverty.

“We see that neighbourhoods with the highest proportion of borrowers who have lost access to library materials are in Strathcona, Grandview-Woodland and Mount Pleasant,” de Castell said. “They’re also the neighbourhoods with the largest proportion of population who are Indigenous or Black, outside of the Dunbar-Southlands area, which includes the Musqueam reserve cardholders.” 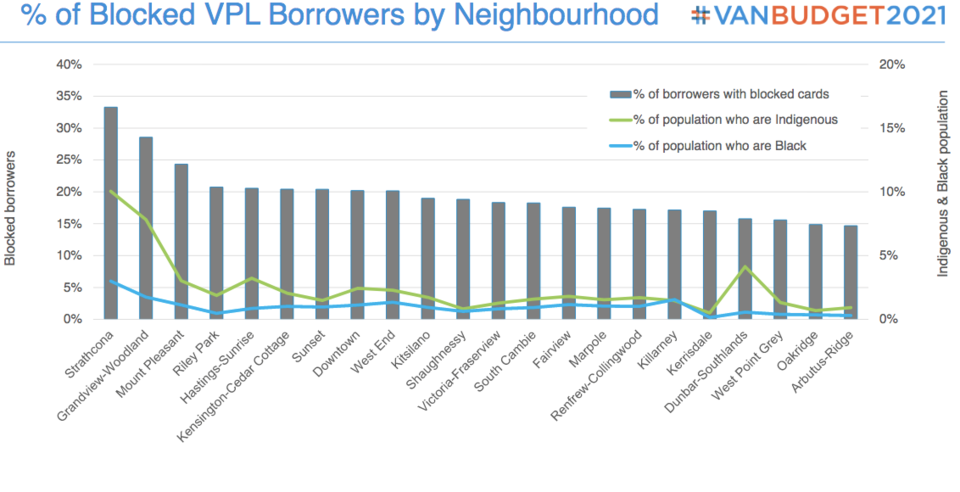 She said people with lower incomes depend on libraries for access to computers to participate in public consultations related to civic affairs. Yet libraries were mostly closed this year during the feedback phase of the city’s 2021 operating budget.

“Council may not have heard these voices,” de Castell said. “Library staff have been hearing about the barriers of fines for many years ever since we started asking why people didn’t use the library.”

Patrons choosing: $10 for food or rent or $10 for library fines

She heard from community librarians that reasons for inactivity are related to fear that a patron couldn’t afford to pay a fine, if a book or library materials were returned late.

Such a city-wide fine-free policy would be an extension of exemptions that have been in place for decades for children, patrons of the Carnegie library branch, those with mobility challenges and others with a disability that prevents or inhibits a person from reading conventional print.

In previous years, the library has run week-long amnesty programs for patrons with overdue fines, which were projected to bring in about $791,000 this year. The $625,000 request would be a one-time investment for 2021.

Coun. Christine Boyle asked Chan that if it were not possible for council to approve the $625,000 to offset fines next year, then what else would be achievable with a lesser amount, to which Chan requested council meet the library board “part way.”

Libraries across Canada have fine-free programs

“For example, with a one-time investment of $150,000, the library could plan a ‘welcome back week’, and we’d invite people who have overdue fines that they can’t pay to come back to the library so we can waive fines that are creating a barrier to access,” she said, adding that another $125,000 could be spent on an Indigenous relations position to improve library services to Indigenous residents.

Chan pointed out more than a dozen libraries across Canada already have fine-free programs, which have led to improved return rates of books and other materials.

Chan and de Castell spoke to council on what was the first of several days devoted to the city’s $1.6-billion, 2021 operating budget. More than 200 people have registered to speak to council, with debate and decision expected Dec. 8.

The budget is based on no more than a five per cent property tax hike and requires city departments to hold off on hiring new employees or reduce staff until city revenues return to pre-pandemic levels.

That includes the library, which means a “1.2 per cent vacancy reduction” and require the 21 branches to operate on reduced hours in the first quarter of next year, said de Castell, noting 625 staff laid off because of pandemic-related library closures have returned to work.

“These layoffs reduced our budget by 13 per cent and saved $6.77 million, but the affect has been profound on the community and the staff, and we’re still experiencing it,” she said.

City staff said the overall shortfall in revenues this year is $85 million, all of it related to the pandemic, particularly the loss in parking enforcement revenues in March and April when parking was free.