For a century, three generations have dutifully served their customers from behind the counters of the beloved Benny’s Market.
Sep 10, 2019 4:03 PM By: Grant Lawrence

From the corner of Union Street and Princess in Strathcona, the Benedetti family has seen it all.

For a century, three generations have dutifully served their customers from behind the counters of the beloved Benny’s Market. 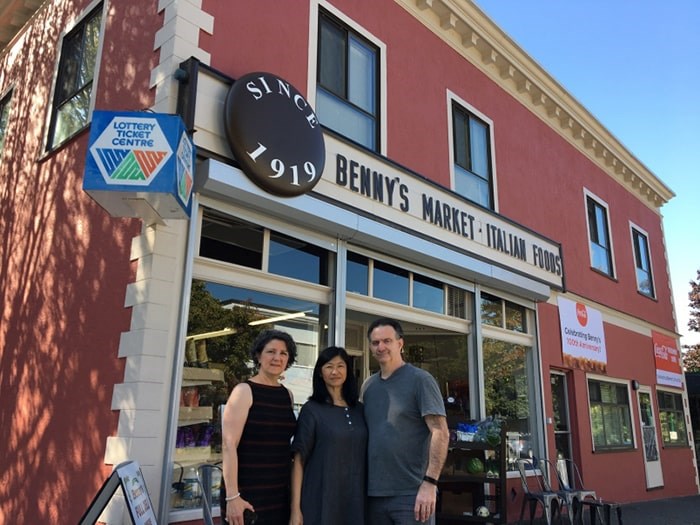 All in the family: Janice, Janet and Ramon Junior Benedetti celebrated the 100th anniversiy of Benny’s Market in August. Photo Grant Lawrence

In 1919, Alfonso Benedetti, a young Italian immigrant from Navelli, opened an ice cream parlour at 598 Union St. with help from the winnings in a backroom poker game. He and a partner paid $900 for the business. The partner was bought out soon after, and it’s been Benedetti-owned ever since, morphing from the ice cream parlour into Benedetti Grocery after a few years.

Strathcona was a popular neighbourhood for Italian immigrants in the early 20th century, and by the late 1930s, after surviving the Depression, Alfonso and his wife Violet managed to purchase the property. The Benedetti family have owned it ever since. 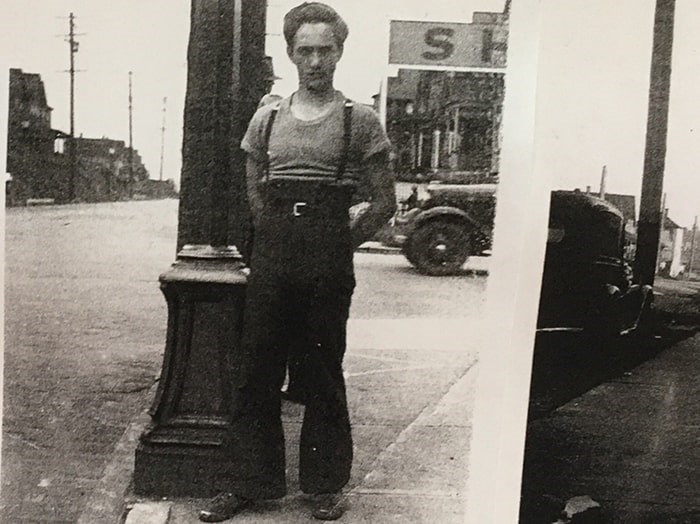 In 1919, Alfonso Benedetti, a young Italian immigrant from Navelli, opened an ice cream parlour at 598 Union St. with help from the winnings in a backroom poker game. Photo supplied

When did it change from Benedetti to Benny’s? For the answer, you’d have to go back to the 1940s and the onslaught of the Second World War.

“Yeah, well, the Italians sided with the Germans,” says Alfonso’s grandson Ramon Benedetti Junior who, along with his wife Janet, now operate both the store and its wholesale food business. “The war had an impact all the way over here, so my grandparents shortened the name on the sign from ‘Benedetti’ to ‘Benny.’ It’s stuck ever since, but that was the reason for that name change.”

Alfonso Benedetti passed away in 1970, and his wife Violet suffered a stroke the same night, which meant their son Ramon Senior took over both the business and the nickname “Benny.” Over the years, Ramon would become known as the “King of Strathcona” for his outgoing nature, community advocacy and endless storytelling. 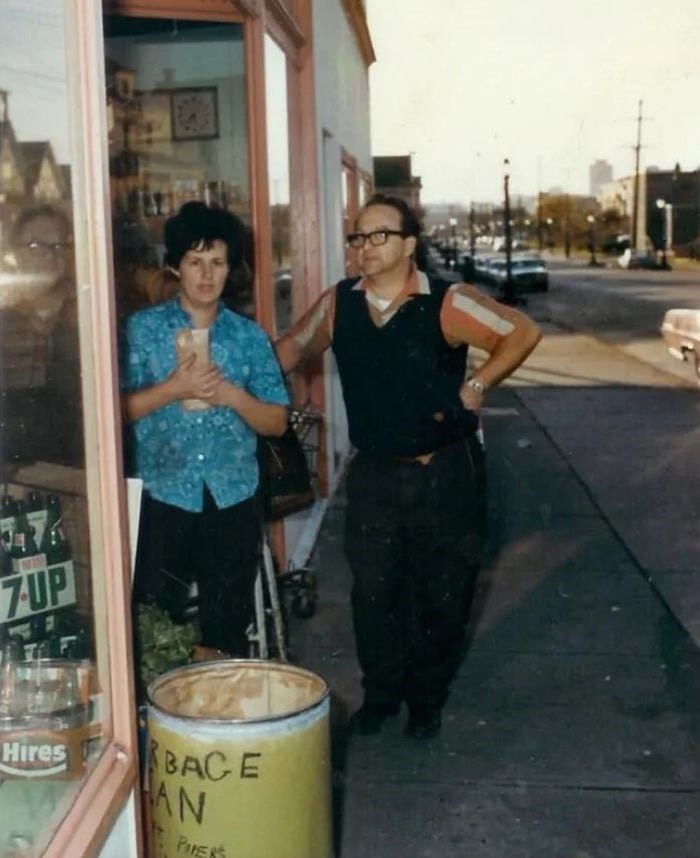 Irma and Ramon Senior Benedetti took over the family business in 1970. Ramon died this April, as the family prepared for the store’s 100th birthday. Photo supplied

Strathcona went through another change in mid-’70s, with the threat of a major highway ripping through East Vancouver, right over top of Benny’s Market. Many of the Italians sold out and moved east to Commercial Drive, Hastings-Sunrise and Burnaby Heights, but the Benedettis remained.

By the 1980s, buoyed by cheap rent, Strathcona had become a Bohemian, artist-friendly district, and many of the alternative sect shopped at Benny’s, including Grammy Award-winning singer k.d. lang. 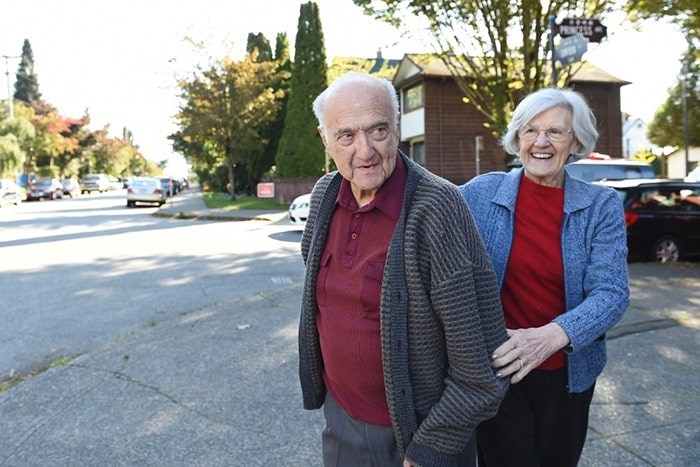 Irma Benedetti adjusts her husband Ramon Sr.’s sweater prior to his photo shoot with the Courier in 2015. Photo Dan Toulgoet

“k.d. lang used to live in the neighbourhood and, yes, she shopped here,” remembers Janet, who joined the family business in 1989. By that time, Benny and his wife Irma, had managed to purchase the house next door and were renting out a few apartments above the store.

“We rented to all sorts of artists,” remembers Janice Benedetti, sibling to Ramon Junior and sisters Francesca and Sandra. “Keith Porteous and Allen Moy, who managed 54-40, were our tenants. The band Bolero Lava practised in the basement, too.” In the house next door, the Benedettis also rented to bands such as Tankhog and Bum.

“Benny knew everybody,” recalls Bill Baker, co-owner of Mint Records, who rented an apartment above Benny’s Market in the 1990s along with his then-wife, singer Rose Melberg. “Benny had a fiery personality and was a really colourful character. Cadillacs would line the street outside the market while Rose and I sat on our upstairs porch and watched Benny and his friends play bocce ball in a court in the backyard, a bunch of classic old Italian guys swearing and smoking cigars.”

Ramon Junior fondly remembers those backyard bocce ball tournaments. “The losing team would have to buy the winning team drinks in dad’s basement bar after the game.”

By the 2000s, Juno-winning musical twins Tegan and Sara were regular Benny’s customers, as was the CBC’s Bill Richardson. These days, one of the regular indie rock luminary customers is Dan Bejar of Destroyer and the New Pornographers.

“Dan lives across the street and comes in about four or five times a day when he’s in town”, says Janet. “He buys it as he needs it. He’s such a funny, nice, kind man.”

As the Benedettis were gearing up for their 100th anniversary party, tragedy struck when Ramon Senior died at age 90 on April 12.

“He was working here just prior to his passing, six days a week, three or four hours a day, doing our books, right up to the end,” says Janet. 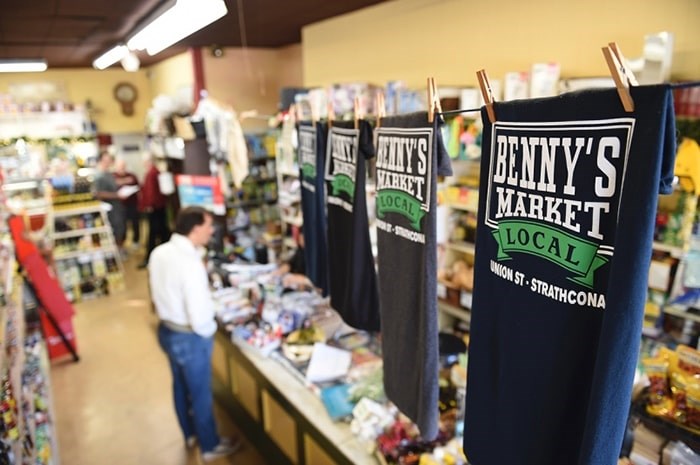 Benny’s Market is still a bustling business, selling specialized Italian goods, an array of fresh deli sandwiches, organic meats, produce, cheeses and lots of regular and hard-to-find grocery items, and even some original boxes of wax matches imported from Italy generations ago.

When reflecting on their century in business, Ramon Junior tries to sum up the secret of their success. “I think it’s customer service,” he says quietly. “Personalized service, as opposed to what you get in the big box stores. Some people don’t understand the vast variety we carry in this store. It’s jammed, it’s full, I don’t think we could fit much more.”

Reddit reunited Canuck winger Justin Dowling and his wife with their diaper bag
Oct 28, 2021 8:59 AM